The “Unhyped” New Areas in Internet and Mobile 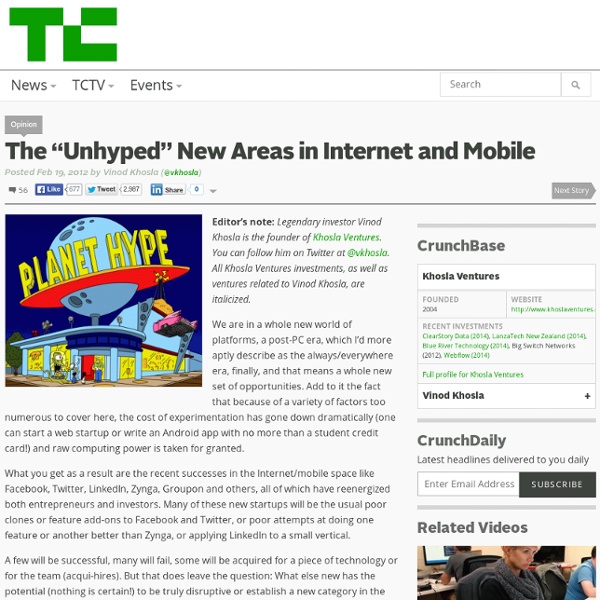 Editor’s note: Legendary investor Vinod Khosla is the founder of Khosla Ventures. You can follow him on Twitter at @vkhosla. All Khosla Ventures investments, as well as ventures related to Vinod Khosla, are italicized. We are in a whole new world of platforms, a post-PC era, which I’d more aptly describe as the always/everywhere era, finally, and that means a whole new set of opportunities. What you get as a result are the recent successes in the Internet/mobile space like Facebook, Twitter, LinkedIn, Zynga, Groupon and others, all of which have reenergized both entrepreneurs and investors. A few will be successful, many will fail, some will be acquired for a piece of technology or for the team (acqui-hires). The post-PC always/everywhere platform will be defined by the many variations of mobile, always available, silent complementary standbys (like home or personal networks and agents) and more. Of course, it is hard to classify any startup into a single category.

Amazon Web Services 10 Million hits a day with Wordpress using a $15 server | Ewan's Blog on IT and stuff like it [Update 2] – It seems W3 Total Cache support has been silently discontinued – it’s not been updated for over 12 months now, and has allegedly got some security issues. Because of this, I would recommend not installing W3 Total Cache as part of these instructions, everything else should run fine. [/Update] [Update] – I’ve tested this using the new Ubuntu 12.04 LTS Edition, and the settings all appear to work correctly without modification. Let me know if you find a problem [/Update] [Update September 2013] – I’ve recently moved my own blog hosting to a $10 a month VPS from Digital Ocean (that link gets you a $10 discount via an affiliate link) and have been very happy with them, including the performance of the blog. 10 Million hits per day with WordPress on a $15 virtual server Install Ubuntu 11.10 (Oneiric) on a new virtual private server- it needs to be 11.10 for all the packages that I’m going to list to work out of the box, but it’s all possible to do with other distributions. Replace

Spectrum Crunch: The cell phone industry hits its limits - Feb. 21 This is part one of a week-long series on the cell phone capacity crunch. NEW YORK (CNNMoney) -- The U.S. mobile phone industry is running out of the airwaves necessary to provide voice, text and Internet services to its customers. The problem, known as the "spectrum crunch," threatens to increase the number of dropped calls, slow down data speeds and raise customers' prices. It will also whittle down the nation's number of wireless carriers and create a deeper financial divide between those companies that have capacity and those that don't. Wireless spectrum -- the invisible infrastructure over which all wireless transmissions travel -- is a finite resource. The U.S. still has a slight spectrum surplus. "Network traffic is increasing," says an official at the FCC's wireless bureau. How did we get here? The number-one biggest driver is consumers' insatiable thirst for e-mail, apps and particularly video on their mobile devices -- anywhere, anytime.

edX - Home Latest in Web Tracking: Stealthy 'Supercookies' How Facebook Can Improve Upon Its 'F' Grade in F-Commerce A lot of attention is being given to the failure of so-called "F-Commerce." Several brands, including JCPenney, Gap and Nordstrom, have launched and already shuttered Facebook stores after seeing disappointing sales on the Facebook platform. I think that is too easy an answer; after all, replace "bar" with "mall" and that statement ceases to make any sense. Malls exist nowadays not merely to give consumers a place to buy products but to provide a physical space for us to get together, be social and shop together. Why shouldn't Facebook be a virtual space for the same sorts of activities that combine social and commerce? The blame for the failure of the first wave of F-Commerce lies with both the retailers and Facebook. Take the web, for example. Then something changed--the Web went from being a place where people were suspicious of entering their credit card numbers to a place where today most of us store our credit card numbers on e-retailing sites like Amazon. Connect: Authored by:

Brands Give Facebook F-Commerce an F By Brian Solis On February 22, 2012 With a looming $100 billion IPO on the horizon and a community that’s estimated to hit a billion users this Fall, Facebook seems unstoppable. Yet on one important front–the store front that is–Facebook has exposed an imperfection. People are not proving ready to actually buy goods and services in Facebook – at least not at the scale retailers are used to seeing through traditional e-commerce. And suddenly, many question the role Facebook actually plays in the monetization strategy of any business. F-commerce emerged only three years ago, offering the ability to buy and sell on Faceboook. While initial reports painted promising future for introducing transactional relationships, Bloomberg stuck a pin in the balloons of idealistic social commerce strategists everywhere. I mean F-commerce only makes sense right? F-Commerce is the Failed Execution of the Uninspired As in any commerce strategy, the customer journey must be defined.

5 Paradoxes Shaping the Future of Mobile Commerce Igor Faletski is the CEO of Mobify, a web platform that optimizes ecommerce and publishing sites for mobile and powers more than 20,000 sites. Remember when it took 23 clicks to find movie showtimes on your mobile phone? While that may seem like an eon ago, in reality it’s just been a few short years. The mobile evolution has been advancing at a break-neck pace. “Mobile is ramping up faster than any other technology we have seen in the past,” says Mary Meeker of Kleiner Perkins. With that growth comes a new set of user behaviors and consumer trends. 1. My company powers about 20,000 ecommerce sites. While multiple factors contribute to this data, the most important may be the power of the tablet, which has quickly emerged as the third digital screen in consumers' lives, in addition to desktops and smartphones. IPad users generally have higher education and higher income than general internet users. The moral of the story for retailers? 2. 3. 4. 5. Yes, we’re living in an app culture.

Google sugarcoated privacy policy changes to mislead users, group charges The Center for Digital Democracy sent a complaint to the Federal Trade Commission Wednesday asking it to find Google in violation of a 2011 consent order, conduct an investigation and request the search giant postpone the rollout of its new privacy policies. In the 16-page complaint, the CDD says Google failed to accurately and honestly inform users of the real reason for changes its privacy policy, which go into effect March 1. The CDD claims the changes are not designed to make a users life easier, as Google has stated, but designed to fuel competition against Facebook, incorporate social media data and to boost Google's advertising business, specifically to grow its display advertising to a $200 billion business. See also: Irreparable injury if FTC fails to police Google? "[Google] has sugarcoated its decision in a manner designed to mislead users," the CDD said. The letter was addressed to Donald Clark, secretary of the FTC, and was signed by Jeff Chester, executive director of CDD.

Joseph Turow: How Companies Are 'Defining Your Worth' Online One of the fastest-growing online businesses is the business of spying on Internet users. Using sophisticated software that tracks people's online movements through the Web, companies collect the information and sell it to advertisers. Every time you click a link, fill out a form or visit a website, advertisers are working to collect personal information about you, says Joseph Turow, a professor at the Annenberg School for Communication at the University of Pennsylvania. They then target ads to you based on that information. On Wednesday's Fresh Air, Turow — the author of the book The Daily You: How the New Advertising Industry is Defining Your Identity and Your Worth — details how companies are tracking people through their computers and cellphones in order to personalize the ads they see. Turow tells Fresh Air's Terry Gross that tracking is ubiquitous across the Internet, from search engines to online retailers and even greeting card companies. Using The Social Space To Market Ads

Amex Invests $100 Million In Its Future: Digital Ecosystem, Not The Plastic Card In its press release today American Express revealed explicitly that its new $100 million Digital Commerce Investment Initiative was destined to fund "early stage startups to facilitate the company's digital transformation." If that sounds like a firm that's aware it's got to rapidly pivot, that's because that's exactly what's going on. Amex's Dan Schulman, Group President Enterprise Growth, spoke to Fast Company to explain the move: As far as saying that the credit card is going to evolve, Schulman noted, "It goes even further than that. Where traditional credit card transactions were all about giving the merchant a secure and authenticated copy of those all-important 16 raised silver numbers on the face of your card, technological developments like NFC, smartphone payments and even innovations like Square and Google Wallet show that there's scope for a much richer interaction to go on at the moment of payment--something that's never been possible before.

Google Busted With Hand in Safari-Browser Cookie Jar | Threat Level Google intentionally circumvented the default privacy settings of Apple’s Safari browser, using a backdoor to set cookies on browsers set to reject them, in the latest privacy debacle for the search and advertising giant. Google immediately disabled the practice after the Wall Street Journal disclosed the practice Thursday night, which was discovered by Stanford researcher Jonathan Mayer and confirmed by security consultant Ashkan Soltani. Safari, which accounts for about 6% of desktop browsing and more than 50% of mobile browsing, is the only major browser to block so-called third-party cookies by default. When you visit a website, all browsers, including Safari, allow that site to put a small tracking file on your computer, which allows the site to identify a unique user, track what they’ve done and remember settings. However, many sites also have Facebook “Like” buttons, ads served by third parties, weather widgets powered by other sites or comment systems run by a third party.