YouTube. Ah, Finally, Ancient Clay Tablets for Dessert. If you spend your days amid ancient clay tablets with one of the earliest forms of written language, the thought might occur to you: Wouldn’t it be fun to bake your own tablets out of gingerbread for the office holiday party? 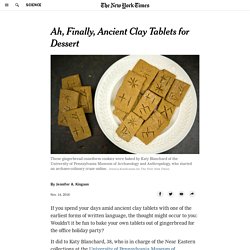 It did to Katy Blanchard, 38, who is in charge of the Near Eastern collections at the University of Pennsylvania Museum of Archaeology and Anthropology. The museum has one of the world’s largest collections of cuneiform tablets from early Mesopotamia, many of them written by ancient scribes who used a reed stylus to etch pictograms into clay. Ms. Blanchard, whose passions are archaeology and baking, used chopsticks, a fish knife and a gingerbread recipe that came packaged with a Coliseum-shaped cookie-cutter she once bought. Not only did her cuneiform cookies beguile her colleagues at the office party, they also gained some measure of internet renown after a Penn Museum publicist posted an article about how she made them. Ms. Although Ms. Inspired by Ms. 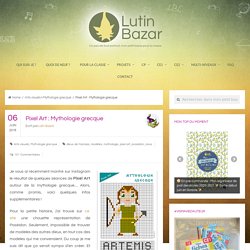 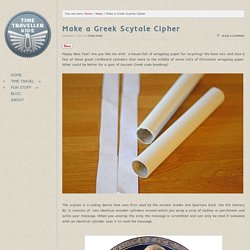 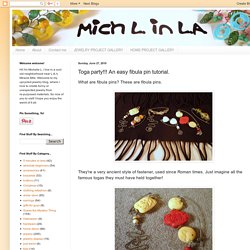 These are fibula pins. They're a very ancient style of fastener, used since Roman times. Just imagine all the famous togas they must have held together! Many jewelry-making peeps are familiar with these, but some of you may not have heard of them. There are tutorials online, but they can get complex. So today I thought I'd show you how to make a nifty simple one. Supplies you will need: just craft wire and a few beads. Next, make a small bend near the loop, like so: Then bend the long tail of wire sideways, at right angles to the bent section. Now thread on a few beads. Almost done! Keep turning until the circle goes all the way around, then a little bit more - so the long tail comes over the top and sticks out parallel to the length of the pin. Now close the pin (hook the long tail into the bent-loop end) and snip off the excess. Make a Roman Wax Tablet. Writing tablets have been used for thousands of years, long before paper was readily available. 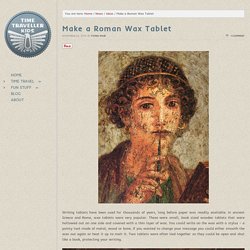 In ancient Greece and Rome, wax tablets were very popular. These were small, book sized wooden tablets that were hollowed out on one side and covered with a thin layer of wax. You could write on the wax with a stylus – a pointy tool made of metal, wood or bone. If you wanted to change your message you could either smooth the wax out again or heat it up to melt it. Two tablets were often tied together so they could be open and shut like a book, protecting your writing. The pictures above were found on walls in Pompeii. Here is how to make one of your own. You will need: Make a Roman oil lamp. We recently went on a camping holiday which made me think about how different life must have been before there was electric light. 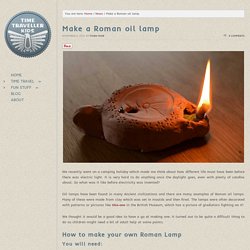 How to make armour: Making a Aspis Shield / Greek Shield + pattern. Fourni par Traduction The aspis (pl. aspides) is the Greek round shield most frequently carried by hoplites as part of the panoply. 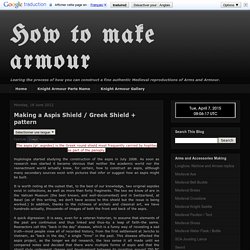 Hoplologia started studying the construction of the aspis in July 2008. As soon as research was started it became obvious that neither the academic world nor the reenactment world actually knew, for certain, how to construct an aspis, although many secondary sources exist with pictures that infer or suggest how an aspis might be built. It is worth noting at the outset that, to the best of our knowledge, two original aspides exist in collections, as well as more than forty fragments.