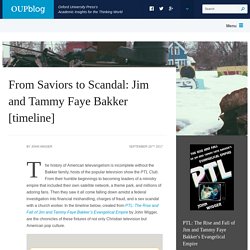 From their humble beginnings to becoming leaders of a ministry empire that included their own satellite network, a theme park, and millions of adoring fans. Then they saw it all come falling down amidst a federal investigation into financial mishandling, charges of fraud, and a sex scandal with a church worker. In the timeline below, created from PTL: The Rise and Fall of Jim and Tammy Faye Bakker’s Evangelical Empire by John Wigger, are the chronicles of these fixtures of not only Christian television but American pop culture.

Lake and Polk County deputies announced on June 2 that they had arrested 101 suspects in the operation, called "L & P" (for Lake and Polk). The New York Daily News reports that of 22 alleged child sex predators arrested, three were theme park employees. “Why do these people work at theme parks? " Polk County Sheriff Grady Judd said at a June 2 press conference, according to the Inquisitr. The Whiskey Wars That Left Brooklyn in Ruins. A Gentleman's Guide To Sex In Prison. Really enjoyed your article, Daniel.

I was a health professional in a men's prison in Australia, and people are always curious about this aspect. They never believe me about the infrequency of nonconsensual sex. I will direct people to this article.Good luck with your memoir! Russia Wants Bulgarians to Stop Vandalizing Soviet Monuments To Look Like American Superheroes. Pair jailed for Edinburgh mosque bacon attack. A teenage girl and 39-year old man, who desecrated a mosque by attacking it with strips of bacon, have both been given custodial sentences. 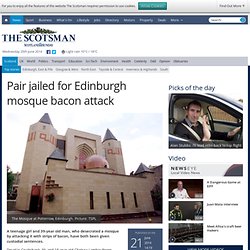 Douglas Cruikshank, 39, and 18-year-old Chelsea Lambie threw bacon at the window of Edinburgh’s Central Mosque and wrapped the meat around door handles on January 31 last year. Edinburgh Sheriff Court heard they and a third offender were associated with the Scottish Defence League, prosecutors said. Wayne Stilwel, 25, from Gorebridge, Midlothian, previously admitted his involvement and was sentenced to 10 months in September.

Releasing 1.5 Million Balloons Into The Air Is A Bad Idea. With the best of intentions, Tom Holowach set out to create a massive spectacle. 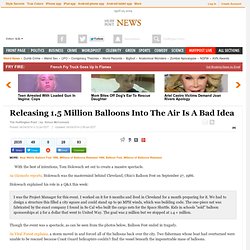 As Gizmodo reports, Holowach was the mastermind behind Cleveland, Ohio's Balloon Fest on September 27, 1986. Holowach explained his role in a Q&A this week: I was the Project Manager for this event. I worked on it for 6 months and lived in Cleveland for a month preparing for it. We had to design a structure this filled a city square and could stand up to 90 MPH winds, which was building code. China: “Violent Government Thugs” Beaten To Death By Angry Crowds After They Killed A Man Documenting Their Brutality. Www.libertycrier.com Riots in southeastern China after brutal police-inspector killed a man with a hammer in broad daylight. 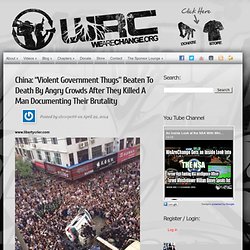 People smashed several police cars and were attacked with tear gas. At least 4 Chengguan, the most hated police-inspectors in China, were beaten to death by angry people in Cangnan County of Wenzhou City, Zhejiang Province (located in the industrial southeast), after they killed a man with a hammer. The police-inspectors hit the man with a hammer until he started to vomit blood, because he was trying to take pictures of their violence towards a woman, a street vendor. German cops hunt hypnotist robbers who entrance victims before stealing valuables. Bankers' Deaths Shine Light on Stress in Industry, Tunnel Vision  Coroners in London are preparing to investigate two apparent suicides as unexpected deaths by finance workers around the world have raised concerns about mental health and stress levels in the industry. 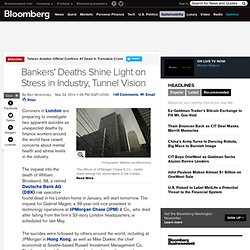 The inquest into the death of William Broeksmit, 58, a retired Deutsche Bank AG (DBK) risk executive found dead in his London home in January, will start tomorrow. The inquest for Gabriel Magee, a 39-year-old vice president in technology operations at JPMorgan Chase (JPM) & Co., who died after falling from the firm’s 33-story London headquarters, is scheduled for late May. The suicides were followed by others around the world, including at JPMorgan in Hong Kong, as well as Mike Dueker, the chief economist at Seattle-based Russell Investment Management Co. Speed trap is dirtiest little town in America. Florida lawmakers are pushing to dissolve the speed trap city of Hampton The tiny rural city was corrupted by money from speeding tickets, they sayThe mayor is in jail, accused of dealing oxycodone; the employees all quitState audit showed poor management, financial abuses, nepotism Hampton, Florida (CNN) -- How off-the-charts corrupt do you have to be to capture somebody's attention in the Sunshine State? 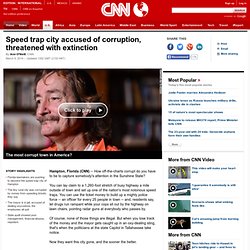 You can lay claim to a 1,260-foot stretch of busy highway a mile outside of town and set up one of the nation's most notorious speed traps. You can use the ticket money to build up a mighty police force -- an officer for every 25 people in town -- and, residents say, let drugs run rampant while your cops sit out by the highway on lawn chairs, pointing radar guns at everybody who passes by. 37-year-old JPMorgan executive may be the latest in a series of bizarre deaths in the financial world in less than a month. A 37-year-old JPMorgan Chase & Co executive director who died from unknown causes Feb. 3 appears to be the latest in a series of untimely deaths among finance workers and business leaders around the world in the past three weeks. 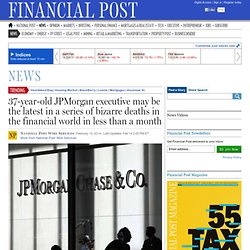 Ryan Crane, a JPMorgan Chase & Co. employee who in a 14-year career at the New York-based bank rose to executive director of a unit that trades blocks of stocks for clients, died in his Stamford, Connecticut, home, according to the website of Leo P. Gallagher & Son Funeral Home in Greenwich, Connecticut. The cause of death will be determined when a toxicology report is completed in about six weeks, a spokeswoman for the state’s chief medical examiner told Bloomberg. Crane, who left a wife and son, started at JPMorgan in equities trading after graduating from Harvard University in 1999, according to his profile on the LinkedIn Corp. website.

“He was known as the ‘Gentle Giant’ by his friends and family,” according to the funeral home’s death notice. 10 More Unsolved Mysteries of the World. Mysteries There is no doubt that some of our most popular lists are ones which revolve around mystery and intrigue. Taman Shud Case. Following a public appeal by police, the copy of the Rubaiyat from which the page had been torn was located. 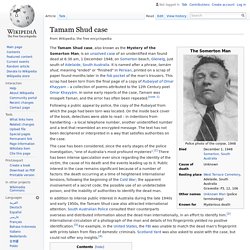 On the inside back cover of the book, detectives were able to read – in indentions from handwriting – a local telephone number, another unidentified number and a text that resembled an encrypted message. The text has not been deciphered or interpreted in a way that satisfies authorities on the case. The case has been considered, since the early stages of the police investigation, "one of Australia's most profound mysteries".[1] There has been intense speculation ever since regarding the identity of the victim, the cause of his death and the events leading up to it.

In addition to intense public interest in Australia during the late 1940s and early 1950s, the Tamam Shud case also attracted international attention. Discovery of body[edit] 10 More Mysteries That Remain Unsolved. Mysteries There can be no denying it – the unsolved mysteries lists are amongst the most popular on the site. Fortunately for us there are still millions of them to write about. The Disturbing Mystery Of Brazil's Lead Masks Case. Millennials Now Bringing Their Parents Along On Job Interviews. Russian Forces to Provide “Security” At US Events. As part of a deal signed last week in Washington DC between the Russian Emergency Situations Ministry and FEMA, Russian officials will provide “security at mass events” in the United States, a scenario that won’t sit well with Americans wary of foreign assets operating on US soil. According to a press release by the Ministry of the Russian Federation for Civil Defense and Emergencies, US and Russian officials met on June 25 at the 17th Joint U.S.

-Russia Cooperation Committee on Emergency Situations. In addition to agreeing with FEMA to “exchange experts during joint rescue operations in major disasters,” the Russian Emergency Situations Ministry will also be providing “security at mass events” in the United States. This suggests that events designated as “National Special Security Events” by the Department of Homeland Security, which include the Super Bowl, international summits such as the G8 and presidential inaugurations, will now rely partly on Russian authorities to provide security.

10 Most Haunted Objects Of All Time - Oddee.com (haunted items, haunted objects...) A haunting occurs when a ghost or other supernatural being refuses to move on after death, instead choosing to dwell among the living. Though most people associate hauntings with houses, a spirit or demon can attach themselves to just about any object, from jewelry to paintings. Read on to learn about ten of the most haunted objects ever recorded in history. Texas Deputy Sues Woman for 'Mental Anguish' After He Kills Her Son-in-Law. Growth rings from the days of the Black Death. This elevated storehouse was in continual use until the 1900s, when it was moved to an outdoor museum in Hallingdal in 1908. (Photo: Hallingdal Museum)