Gmail. Pope Francis ignites a revolt that will overthrow American capitalism. Yes folks, Pope Francis is a revolutionary destined to end up in the history books right up there with Lenin and Marx, Mao and Castro. 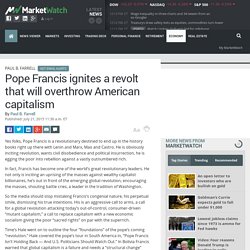 He is obviously inciting revolution, wants civil disobedience and political insurrection, he is egging the poor into rebellion against a vastly outnumbered rich. In fact, Francis has become one of the world’s great revolutionary leaders. He not only is inciting an uprising of the masses against wealthy capitalist billionaires, he’s out in front of the emerging global revolution, encouraging the masses, shouting battle cries, a leader in the tradition of Washington. So the media should stop mistaking Francis’s congenial nature, his perpetual smile, dismissing his true intentions.

His is an aggressive call to arms, a call for a global revolution attacking today’s out-of-control, consumer-driven “mutant capitalism,” a call to replace capitalism with a new economic socialism giving the poor “sacred rights” on par with the superrich. 1. 2. 3. 4. 5. After hard negotiation, historic Iran nuclear deal reached. VIENNA (AP) — After 18 days of intense and often fractious negotiation, world powers and Iran struck a landmark deal Tuesday to curb Iran's nuclear program in exchange for billions of dollars in relief from international sanctions — an agreement designed to avert the threat of a nuclear-armed Iran and another U.S. military intervention in the Muslim world. 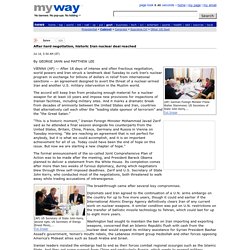 The accord will keep Iran from producing enough material for a nuclear weapon for at least 10 years and impose new provisions for inspections of Iranian facilities, including military sites. And it marks a dramatic break from decades of animosity between the United States and Iran, countries that alternatively call each other the "leading state sponsor of terrorism" and the "the Great Satan. " "This is a historic moment," Iranian Foreign Minister Mohammad Javad Zarif said as he attended a final session alongside his counterparts from the United States, Britain, China, France, Germany and Russia in Vienna on Tuesday morning. What Makes a Presidential Résumé? Nineteen former members of the American workforce are running for president—including a pastor, a horseshoer, and a documentary filmmaker. 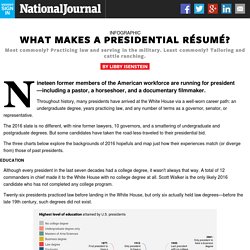 Throughout history, many presidents have arrived at the White House via a well-worn career path: an undergraduate degree, years practicing law, and any number of terms as a governor, senator, or representative. The 2016 slate is no different, with nine former lawyers, 10 governors, and a smattering of undergraduate and postgraduate degrees. But some candidates have taken the road-less-traveled to their presidential bid. The three charts below explore the backgrounds of 2016 hopefuls and map just how their experiences match (or diverge from) those of past presidents. Although every president in the last seven decades had a college degree, it wasn't always that way. 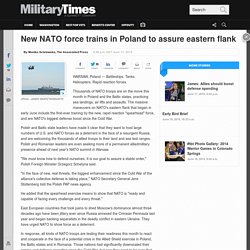 Tanks. Helicopters. Rapid reaction forces. Thousands of NATO troops are on the move this month in Poland and the Baltic states, practicing sea landings, air lifts and assaults. The massive maneuvers on NATO's eastern flank that began in early June include the first-ever training by the new, rapid reaction "spearhead" force, and are NATO's biggest defense boost since the Cold War. Polish and Baltic state leaders have made it clear that they want to host large numbers of U.S. and NATO forces as a deterrent in the face of a resurgent Russia, and are welcoming the thousands of allied troops to their land and sea test ranges.

"We must know how to defend ourselves. Paul Ryan's new partner: Obama - CNNPolitics.com. Instead, he's allied with the President he tried to defeat. As chairman of the powerful House Ways and Means Committee, he's muscling a controversial trade bill through the House that could shape President Barack Obama's legacy -- and his own. "Yeah, the irony's not necessarily lost on me. Look, I think the President on this particular issue is right and therefore I think this is good for our country, good for the people I represent. Trade is very important for America -- it's how we get more jobs," Ryan told us during an interview in his Capitol office this week. But did he ever envision working this closely with Obama? "I've done a lot of things in my career that I never envisioned in the future," replied Ryan. The bill Ryan and Obama are working on would make it easier for presidents to move big trade deals through Congress.

The Senate approved the so-called fast track authority last month, despite opposition from some members of both parties. Michael Sandel. Capitalism is killing America’s morals, our future. Paul Tudor Jones II: Why we need to rethink capitalism.