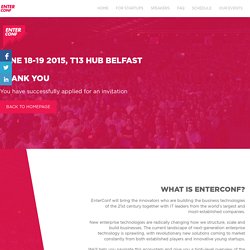 In just 4 years, we’ve built the largest technology conference in Europe. We achieved this by taking a different approach. We use data science to augment every part of our events, from the attendees’ networking, to the programme of content, to the show-floor layout. This difference works for our attendees, speakers, partners, and more, meaning our events have grown at unprecedented rates and continue to attract back the world’s elite, year in, year out. In 2015 and beyond, we’re bringing this revolutionary approach to a variety of new verticals – EnterConf being our first.

Our first event Web Summit has grown from 400 attendees to over 20,000 attendees from around the world in just 4 years. CONTACT in the DESERT. NEW HUMANITY MOVEMENT. Mother's Calling - Unity Is Change Retreat. Burning Mountain Festival. Unify. The American Student Who's Planning an Israeli-Palestinian Music Festival. Farm Fest 2014. JEWISH-PALESTINIAN DIALOGUE: Progress Report. ZAYDEL. As human beings we have a natural propensity to gather at certain times - at a festival, to form community, to engage in experiences and adventures with friends, to celebrate life… There is something about the energy of exchange between us that creates a synergetic effect when we come together. 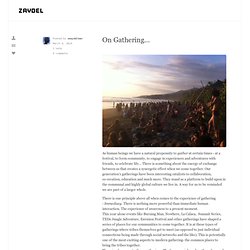 Our generation’s gatherings have been interesting catalysts to collaboration, co-creation, education and much more. They stand as a platform to build upon in the communal and highly global culture we live in. A way for us to be reminded we are part of a larger whole. There is one principle above all when comes to the experience of gathering - Immediacy. There is nothing more powerful than immediate human interaction. This year alone events like Burning Man, Nowhere, La Calaca, Summit Series, TEDx Jungle Adventure, Envision Festival and other gatherings have shaped a series of places for our communities to come together. There is a language to these gatherings. Some Israelis Go New Age - WorldWide Religious News. Asia/Pacific - Israel/Palestine - Other NRMs Some Israelis Go New AgeBy JASON KEYSER (AP, June 16, 2001) PARDES HANNA, Israel - Incense wafted through the air as vendors peddled herb tea, sushi, ceramic moons and therapeutic massages under the shade of pine trees. 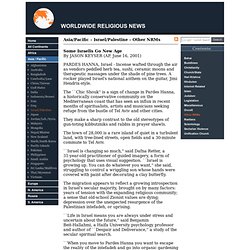 A rocker played Israel's national anthem on the guitar, Jimi Hendrix-style. The ``Chic Shouk'' is a sign of change in Pardes Hanna, a historically conservative community on the Mediterranean coast that has seen an influx in recent months of spiritualists, artists and musicians seeking refuge from the bustle of Tel Aviv and other cities. They make a sharp contrast to the old stereotypes of gun-toting kibbutzniks and rabbis in prayer shawls. The town of 28,000 is a rare island of quiet in a turbulent land, with tree-lined streets, open fields and a 30-minute commute to Tel Aviv.

``Israel is changing so much,'' said Dafna Retter, a 31-year-old practitioner of guided imagery, a form of psychology that uses visual suggestion. The American Student Who's Planning an Israeli-Palestinian Music Festival. About Us. Who We Are Together, we're changing our world - one child's life at a time. 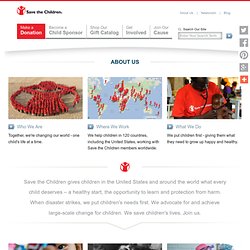 Where We Work We help children in 120 countries, including the United States, working with Save the Children members worldwide. What We Do We put children first - giving them what they need to grow up happy and healthy. Save the Children gives children in the United States and around the world what every child deserves – a healthy start, the opportunity to learn and protection from harm. Willy Brandt Center Jerusalem – English. In 2007, four influential youth movements active in Palestine and Israel, including the Arab Israeli society, chose, against all odds, to meet in order to learn from each other instead of learning about each other. 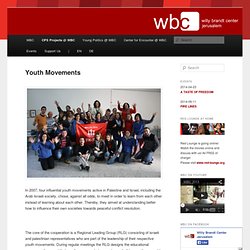 Thereby, they aimed at understanding better how to influence their own societies towards peaceful conflict resolution. The core of the cooperation is a Regional Leading Group (RLG) consisting of israeli and palestinian representatives who are part of the leadership of their respective youth movements. During regular meetings the RLG designs the educational processes they want their youth movements to experience. In this way, they are able to spread methods and contents of civil conflict resolution in the parts of the society, in which they are active. The educational cooperation has had a major impact on the persons directly involved as well as on the agenda setting within the youth movements and the messages transferred to Israeli & Palestinian youth.