The News Literacy Project. Untangling the Overlapping Conflicts in the Syrian War. A Civil War Russia, Iran, Hezbollah and local militias United States, Turkey, Arab nations A War Against ISIS Australia, Bahrain, Canada, France, Jordan, Saudi Arabia, Turkey and United Arab Emirates The two conflicts have cast the United States and Russia as enemies in one war and nominal allies in the other. 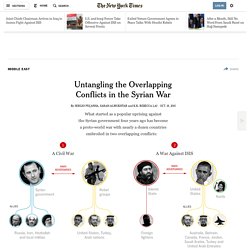 Civil War U.S., Turkey, Saudi Arabia and some Arab nations Russia, Iran, Hezbollah U.S., Turkey, Saudi Arabia and some Arab nations Rebel groups supported by the United States are focused on toppling the Syrian president, Bashar al-Assad, not rooting out the Islamic State. The United States is focused on defeating the Islamic State. Russia, Iran and the Lebanese group Hezbollah want to keep Mr. The Islamic State, meanwhile, wants to both unseat Mr. Syria’s territory has been fragmented after four years of war.The government now controls only a fraction of the country. Rebel groups made major gains in this area this year. The government lost Palmyra to ISIS in May. Control as of Oct. 9 Government Rebel Kurds. The Secular Roots of a Religious Divide in Contemporary Iraq. The Islamic State (ISIS) in Iraq, centered in the central and northern part of the country, is a place where leaders torture and kill people who do not follow a draconian interpretation of Sunni Islam. 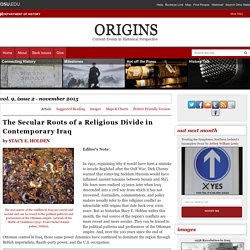 But ISIS has a particular hostility toward followers of Shi’i Islam, as three incidents from the summer of 2014 highlight. ISIS ordered the mass murder of 1,500 Shi'i militiamen in Tikrit, a Sunni stronghold and the former hometown of Saddam Hussein. When ISIS forces drove through villages surrounding Kirkuk, Shiite families played dead in the hopes that they would not be gunned down with others of their same identity. And when the Islamic State captured a prison in Mosul, its leaders ordered all Shi'is and other minority peoples into a ditch and killed them.

In Iraq, the population is approximately 60% Shi'is and 20% Arab Sunnis. When the Western media does inject pragmatic power considerations into its analysis of sectarian tensions in Iraq, they are of courte durée. Origins: Current Events in Historical Perspective. The Connected Classroom - News. Kids need the news presented to them in a manner that they can understand with the background that they may not have learned yet. 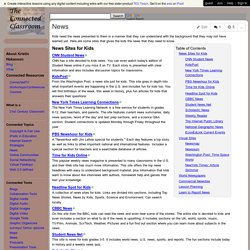 Here are some sites that gives the kids the news that they need to know. CNN Student News CNN has a site devoted to kids news. You can even watch today's edition of Student News online if you miss it on TV. Each story is presented with clear information and also includes discussion topics for classrooms. KidsPost From the Washington Post, a news site just for kids. New York Times Learning Connections The New York Times Learning Network is a free service for students in grades 6-12, their teachers, and parents. PBS Newshour for Kids A "NewsHour with Jim Lehrer special for students. " Time for Kids Online This popular weekly news magazine is presented to many classrooms in the U.S. and their Web site has much more information. Headline Spot for Kids A collection of news sites for kids. 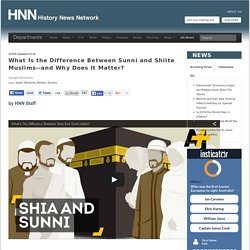 In a special 9-11 edition of the Journal of American History, Appleby explained that the Shiite outlook is far different from the Sunni's, a difference that is highly significant: Osama bin Laden was a Sunni Muslim. Syreda hunny ibrahim - 3/24/2011. AllAfrica.com: Home. Teaching Tolerance. The Seattle Times: Two Peoples, One Land. 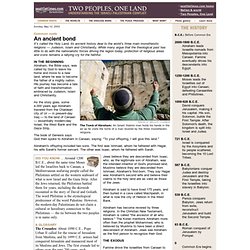 While many argue that the theological past has little to do with the nationalistic forces driving the region today, protection of religious areas and icons remains a rallying cry for the faithful. IN THE BEGINNING Abraham, the Bible says, was called by God to leave his home and move to a new land, where he was to become the father of a mighty nation. His journey has become a tale of faith and transformation embraced by Judaism, Islam and Christianity. As the story goes, some 4,000 years ago Abraham traveled from the Chaldean city of Ur — in present-day Iraq — to the land of Canaan — essentially modern-day Israel, the West Bank and the Gaza Strip. The book of Genesis says God then spoke to Abraham in Canaan, saying: "To your offspring, I will give this land. " Abraham's offspring included two sons.