Rooftop Film Club Presents The Ultimate Film Experience. Gaza war may be over but Jerusalem is still simmering. Tariq Abu Khdeir has been arrested twice this summer. 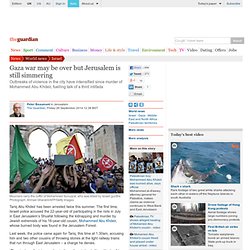 The first time, Israeli police accused the 22-year-old of participating in the riots in July in East Jerusalem’s Shuafat following the kidnapping and murder by Jewish extremists of his 16-year-old cousin, Mohammed Abu Khdeir, whose burned body was found in the Jerusalem Forest. Last week, the police came again for Tariq, this time at 1.30am, accusing him and two other cousins of throwing stones at the light railway trains that run through East Jerusalem – a charge he denies. “They took me for interrogation to the police station in Neve Yaakov,” he says. “It was full. There were young guys in there accused of everything – from throwing stones and fireworks. Tariq Abu Khdeir is one of more than 700 Palestinians from East Jerusalem, 260 of them children as young as 13, who have been arrested in the continuing crackdown on what those on both sides have tried to define as the beginnings of a “kids’ intifada”.

Occupy Central Is Not Like Previous Protest Movements. The ongoing pro-democracy protests in Hong Kong have been described in the US media through a prism of comparisons. 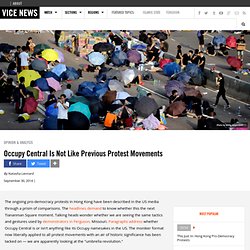 The headlines demand to know whether this the next Tiananman Square moment. Talking heads wonder whether we are seeing the same tactics and gestures used by demonstrators in Ferguson, Missouri. Paragraphs address whether Occupy Central is or isn't anything like its Occupy namesakes in the US. The moniker format now liberally applied to all protest movements with an air of historic significance has been tacked on — we are apparently looking at the "umbrella revolution.

" And comparisons are useful. But the way in which the Occupy Central demonstrations appear unique, even peculiar to Hong Kong, might tell us more about the idiosyncratic challenges facing the Special Administrative Region. Let's start with umbrellas. But I'm not sure this is the umbrella revolution, largely because it's not a revolution. Of course there are broader issues at play.

London Fashion Week - Show Schedule. August 2014 Will Be The Greatest Month Of Your Lifetime, And Here’s Why! Usually, August means back to school. 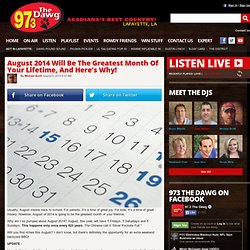 For parents, it’s a time of great joy. For kids, it’s a time of great misery. However, August of 2014 is going to be the greatest month of your lifetime. Why am I so pumped about August 2014? August, this year, will have 5 Fridays, 5 Saturdays and 5 Sundays. Will you find riches this August? Upon further investigation, it seems that maybe this isn’t as rare of an occurrence as I originally thought. “In August 2010, an item began circulating via social media sites and e-mailforwards claiming that the month was something special: An August including five Sundays, Mondays, and Tuesdays happened only once every 800+ years,and 2010 was one of those rare years. 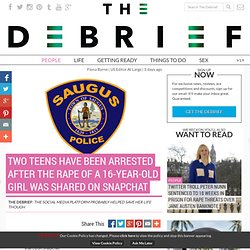 The girl was drugged, brutally assaulted, stripped naked, and left for dead behind a school in the town. She suffered injuries so serious that her mother says she may not have survived if she hadn’t been recognised in the Snapchat videos. ‘Somebody noticed who it was and called the cops, and if this person didn't call the cops my daughter wouldn't be here right now,’ she told whdh.com. A 17-year-old boy and an 18-year-old girl have been arrested, and police are looking for 19-year-old Rashad Deihim, who’s missing. Victoria Beckham Becomes UNAIDS Goodwill Ambassador. Victoria Beckham has become a UNAIDS Goodwill Ambassador, meaning she will work towards making sure that children are born without HIV and that children and women who and are living with and affected by the virus are given the medicine and care that they need. 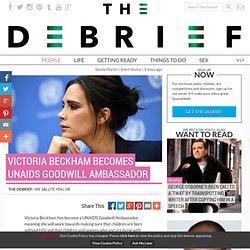 Go VB! 'This is the beginning of an important journey for me. As a woman and a mother I have a responsibility to support other women,' she said. 'I am proud and honoured to be working with UNAIDS in this new role to help to raise resources and awareness to support and empower women and children affected by HIV.' The announcement comes a couple of months after Victoria visited HIV clinics in Cape Town, where she learnt about the significance of antiretroviral therapy – a treatment which suppresses the Aids virus and stop its progression – and how children are not being given the correct medication. Like this? At work? You might want to think about the fact you're about to read something that wouldn't exactly get a PG rating.