The Rebels and the Redcoats. Rebels and Redcoats. The series was produced by WGBH Boston and Granada Television in association with BBC Wales. 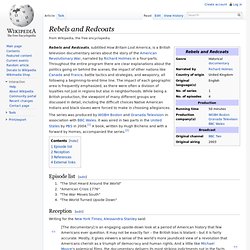 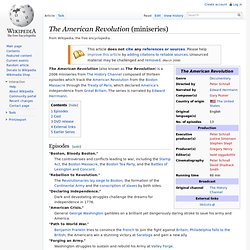 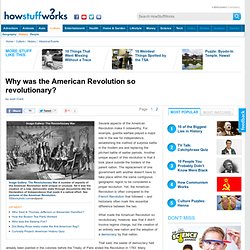 For example, guerilla warfare played a major role in the war for independence, establishing the method of surprise battle in the modern era and replacing the pitched battle of earlier periods. Another unique aspect of this revolution is that it took place outside the borders of the parent nation. The replacement of one government with another doesn't have to take place within the same contiguous geographic region to be considered a proper revolution. 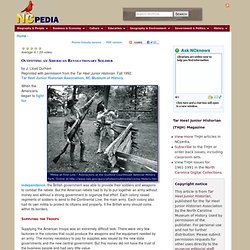 Lloyd Durham Reprinted with permission from the Tar Heel Junior Historian. Fall 1992.Tar Heel Junior Historian Association, NC Museum of History "Militia at First Line. " Reenactors at the Guilford Courthouse National Military Park. Online at the Americans began to fight for independence, the British government was able to provide their soldiers and weapons to combat the rebels. Articles of Confederation. America’s First Constitution The first constitution in our nation's history was the U.S. 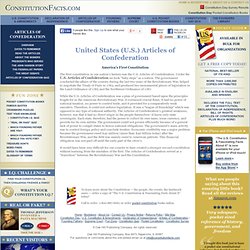 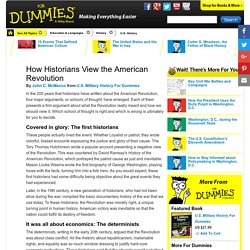 Each of them presents a firm argument about what the Revolution really meant and how we should view it. Which school of thought is right and which is wrong is ultimately for you to decide. Contrasting strengths & weaknesses. A. 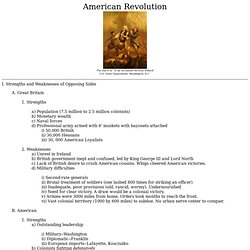 Second Continental Congress (May 1775) called Washington to head colonial army. 1) While not a military genius (he lost more battles than he won), he was trusted implicitly by his soldiers 2) He refused to be paid, though his records indicate expenses of over $100,000 3) Shrewd political choice by Congress: Virginian, wealthy, aristocratic, above reproach. B. Following Bunker Hill (costly victory for British), King George III proclaimed colonies in rebellion and hired Hessians to crush rebels. C. 1) Appealed to natural law ("an island should not rule a continent") Digital History. Printable Version In 1778, the royal army consisted of nearly 50,000 regular troops combined with over 30,000 German (Hessian) mercenaries. 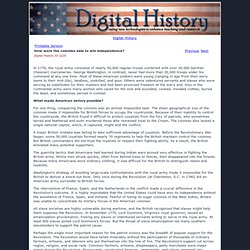 George Washington, in contrast, never had more than 20,000 troops under his command at any one time. Most of these American soldiers were young (ranging in age from their early teens to their mid-20s), landless, unskilled, and poor. Others were indentured servants and slaves who were serving as substitutes for their masters and had been promised freedom at the war's end. Why Did the British Lose the AWI? VID: The costs of the AWI. VID: British Loyalists v American Patriots. Last revised: March, 2014 Acceptance of Terms Please read this Terms of Service Agreement ("Terms of Service", "Terms of Use") carefully. 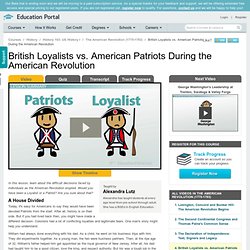 These terms apply to Education Portal and its related websites owned and operated by Remilon, LLC ("Education Portal,", "Site", "Sites", "our", "us"). Patriots. Patriots (also known as Rebels, Revolutionaries, Congress-Men, or American Whigs) were those colonists of the British Thirteen United Colonies that violently rebelled against British control during the American Revolution and in July 1776 declared the United States of America an independent nation. 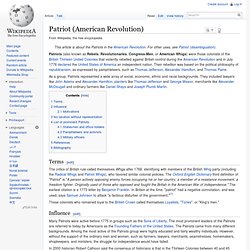 Their rebellion was based on the political philosophy of republicanism, as expressed by pamphleteers, such as Thomas Jefferson, Alexander Hamilton, and Thomas Paine. As a group, Patriots represented a wide array of social, economic, ethnic and racial backgrounds. They included lawyers like John Adams and Alexander Hamilton; planters like Thomas Jefferson and George Mason; merchants like Alexander McDougall and ordinary farmers like Daniel Shays and Joseph Plumb Martin. Loyalists. Britannia offers solace and a promise of compensation for her exiled American born Loyalists.

(Reception of the American Loyalists by Great Britain in the Year 1783. Engraving by H. Moses after Benjamin West.) AWI Key Events. Guy Carleton, 1782-83. The military and political career of his younger brother Thomas Carleton was interwoven with his own, and Thomas served under him in Canada.[2] Early career[edit] In 1751 he joined the 1st Foot Guards and in 1752 was promoted to Captain. His career received a major boost when he was chosen, at the suggestion of Wolfe, to act as a guide to the Duke of Richmond during a tour of the battlefields of the recent war.

Richmond would become an influential patron to Carleton.[6] Bergen-op-Zoom where Guy Carleton first saw action in 1747. Seven Years War[edit] Germany[edit] For some time he was unable to gain active position, until he was sent back to Germany to serve as an aide-de-camp to Duke Ferdinand of Brunswick.[7] Henry Clinton, 1778-82.

General Sir Henry Clinton, KB (16 April 1730 – 23 December 1795) was a British army officer and politician, best known for his service as a general during the American War of Independence. First arriving in Boston in May 1775, from 1778 to 1782 he was the British Commander-in-Chief in North America. William Howe, 1776-78. William Howe, 5th Viscount Howe, KB, PC (10 August 1729 – 12 July 1814) was a British army officer who rose to become Commander-in-Chief of British forces during the American War of Independence. Howe was one of three brothers who enjoyed distinguished military careers.

Howe was sent to North America in March 1775, arriving in May after the Revolutionary War broke out. Thomas Gage, 1763-75. Continental Army. Creation[edit] Nathaniel Greene. Nathanael Greene. Before the American Revolutionary war[edit] Marriage[edit] In 1774, he married Catharine Littlefield Greene, also known as "Caty," of Rhode Island. They had 5 children. Militia[edit] Charles Lee. Charles Lee. During 1776, forces under his command repulsed a British attempt to capture Charleston, which boosted his standing with the army and Congress. Later that year he was captured by British cavalry under Banastre Tarleton and held as a prisoner until exchanged in 1778.

Artemus Ward. Artemas Ward. Early life and career[edit] Artemas was born at Shrewsbury, Massachusetts, in 1727 to Nahum (1684–1754) and Martha (Howe) Ward.[1][not in citation given] He was the sixth of seven children. His father had broad and successful career interests as a sea captain, merchant, land developer, farmer, lawyer and jurist. As a child he attended the common schools and shared a tutor with his brothers and sisters. He graduated from Harvard in 1748 and taught there briefly. George Washington.