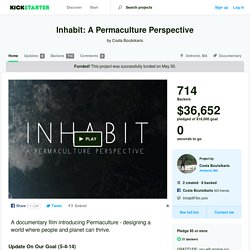 10 Dark Secrets Australia Doesn't Want You To Know. An Interview with Daniel Pinchbeck in Ever Manifesto. Recently I was profiled by Ever Manifesto, distributed in H&M stores. 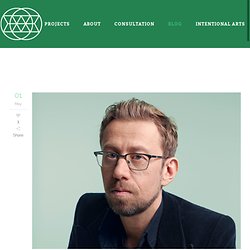 The Bigger Picture: Daniel Pinchbeckby Xerxes Cook An American philosopher and author who believes the economic systems humanity has created have the potential to act as remedies to the environmental chaos our planet is witnessing today, here, Daniel Pinchbeck discusses ideas of corporate alchemy and whether the ecological crisis is an initiatory process that will lead to the next stage of human evolution. It’s been seven years since you wrote 2012: The Return of Quetzalcoatl, in which you concluded that the end of the Mayan calendar would mark a period of transition from “ego-based materialism, alienation and individuation” towards the next stage of human evolution which recognises the inter-connected nature of life… Please could you tell us how these ideas have developed in the book you are working on now?

If cash rules everything around us, how can we redesign the financial systems we’ve created? Corporate alchemy. Www.adidam.org/Content/teaching/print-files/bright-new-age.pdf. Following the Money: Who’s in Control? Human beings are beginning to question the environment around them more so than ever before. Our capability to step outside of the box and observe events taking place on planet Earth from a neutral standpoint continues to increase at an exponential rate. Observing the entire Earth experience from an open mind has cleared the way for a change in perception, which has the potential to change our planet and the way we operate on it forever. Political, media, food, education, health, energy and financial industries are now under intense scrutiny as people continue to let go of fear, speak up and ask more questions.

Data Storage in Crystal Quartz will change Everything! Have Scientists Discovered a Way of Peering Into the Future? Deep in the basement of a dusty old library in Edinburgh lies a small black box that churns out random numbers. 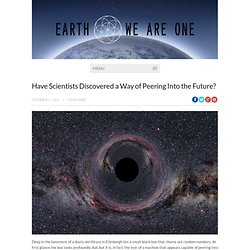 At first glance the box looks profoundly dull, but it is, in fact, the ‘eye’ of a machine that appears capable of peering into the future. The machine apparently sensed the September 11th attacks on the World Trade Centre four hours before they happened, and appeared to forewarn of the Asian Tsunami. How Biophotons Show That We Are Made Of Light. Beyond capitalism and socialism: could a new economic approach save the planet? To avoid social, environmental and economic collapse, the world needs to move beyond the standard choices of capitalism or socialism. 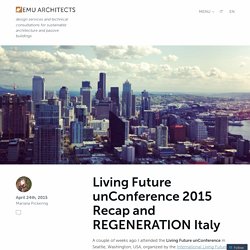 Two weeks later, I was again fortunate enough to attend the introduction of this certification here in Italy at the REGENERATION competition and conference hosted by Macro Design Studio in Rovereto, Italy. Here are my impressions from both events… Freedom Cove, B.C. Float Home, Is A Whole New Level Of Off-Grid Living. Transformational Thought: Passing Through the Bottleneck. By Jason F. 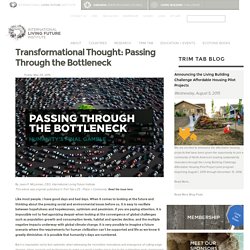 McLennan, CEO, International Living Future InstituteThis article was originall published in Trim Tab v.25 - Place + Community. Read the issue here. Like most people, I have good days and bad days. When it comes to looking at the future and thinking about the pressing social and environmental issues before us, it is easy to vacillate between hopefulness and hopelessness, optimism and pessimism. If you are paying attention, it is impossible not to feel agonizing despair when looking at the convergence of global challenges such as population growth and consumption levels, habitat and species decline, and the multiple negative impacts underway with global climate change. First man-made biological leaf will generate oxygen. The Future We Want. RSA Animate - The Empathic Civilisation. Hot Tips for Breaking Habits that Limit Your Potential. Do you know which habits don’t serve you? 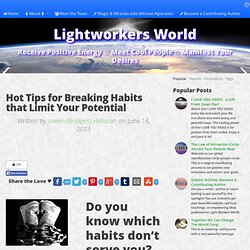 It may surprise you to learn that when it comes to living a live by design and establishing a mindset that is firmly rooted in peace, joy and abundance, that our biggest limitation is our own habits. You're human, aren't you? (Original Video) Ideas Are Social Evolution. Hacking Abundance. #postscarcity or bust! By Philip Richlin We live on a planet with finite resources, however scarcity is relative to the way we manage those resources. 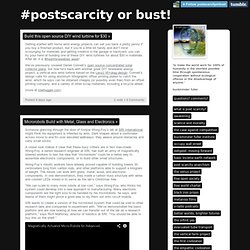 “Scarcity” as a condition is artificial in the 21st century. Scarcity is artificial in the sense that it literally has to be enforced by a socioeconomic system of structural and behavioral violence. To quote the sociologist Philip Slater “Inequality, originally a consequence of scarcity, is now a means of creating artificial scarcities.” Anti-authoritarians have traditionally defined themselves as opposed to socioeconomic hierarchy. Capitalism is an authoritarian economic system, based on private property rights (property based on the threat of violence as well as money rather than needs or use), the private ownership of the means of production, economic competition, and a network of top down organizations that people are forced into in order to survive. 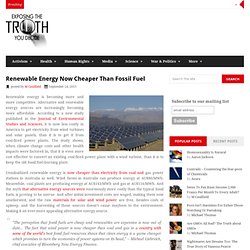 Alternative and renewable energy sources are increasingly becoming more affordable. According to a new study published in the Journal of Environmental Studies and Sciences, it is now less costly in America to get electricity from wind turbines and solar panels, than it is to get it from coal-fired power plants. The study shows, when climate change costs and other health impacts were factored in, that it is even more cost effective to convert an existing coal-fired power plant with a wind turbine, than it is to keep the old fossil fuel-burning plant.

Unsubsidized renewable energy is now cheaper than electricity from coal and gas power stations in Australia as well. Wind farms in Australia can produce energy at AU$80/MWh. Since 1990, wind-generated power has grown 26 percent per year, and solar has risen 48 percent. 10 Reasons Why EarthShips Are F!#%ing Awesome. Earthships are 100% sustainable homes that are both cheap to build and awesome to live in. 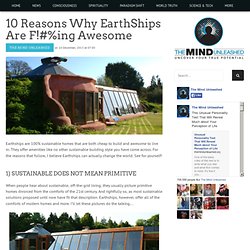