Windsor event planner re-invents local food and lifestyle events. She’s won national and provincial awards for her events and conventions, but Teanna Lindsay still worries that people won’t show up to her party. 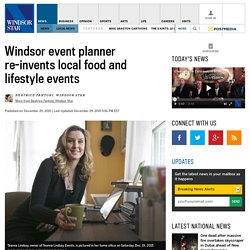 “Of course!” Said Lindsay, who is among Windsor-Essex’s prodigal children who left town to launch careers and are now returning to set up their ventures closer to home. Events don’t always go as planned, she said, and she’s still amazed when it all comes together. “That moment right there is like, ‘Awesome. This came out of my mind.'” Lindsay is the brains behind some of the region’s newest and increasingly popular events, including the Walkerville and Kingsville night markets and the restaurant-hopping Tasting Trolley.

But, the Cottam native said, she never thought she would end up in event planning. But rather than stay in Toronto, Lindsay wanted to make a go of it back in Windsor and moved back in 2013. The idea for the night market emerged over drinks with friends, Lindsay said. 7 Reasons to Love Hamilton’s Supercrawl. From Toronto, just down the QEW is a breeding ground for art and music amidst streets lined with trendy restaurants and places to rent for cheap. 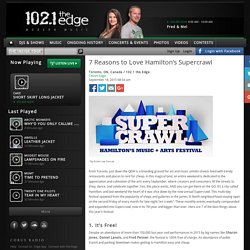 In this magical land, an entire weekend is dedicated to the appreciation and cultivation of the arts every September, where creators and consumers fill the streets to shop, dance, and celebrate together. Yes, this place exists, AND you can get there on the GO. It’s a city called Hamilton, and last weekend the heart of it was shut down by the now-annual Supercrawl. This multi-day festival spawned from the popularity of shops and galleries in the James St North neighbourhood staying open on the second Friday of every month for late-night “art crawls”. These monthly events eventually compounded and expanded into Supercrawl, now in its 7th year and bigger than ever.

Saturday May 9 - Sunday May 10, 2015. Snow Balls: Five Winter Festivals Worth the Trip - WSJ. THE CURE FOR winter’s chill is often a crackling fire or a steaming mug of hot chocolate. 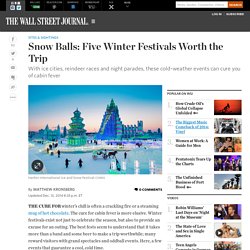 The cure for cabin fever is more elusive. Winter festivals exist not just to celebrate the season, but also to provide an excuse for an outing. The best fests seem to understand that it takes more than a band and some beer to make a trip worthwhile; many reward visitors with grand spectacles and oddball events. Here, a few events that guarantee a cool, cold time. A Capital of Cold in China The city of Harbin is closer to the Russian and Mongolian borders than it is to Beijing—and for two months a year, it turns that frosty location to its advantage. Ice Dream in New York In February, time isn’t the only thing frozen at the Hanford Mills Museum in upstate New York. A Big Chill in Canada Billed as the largest winter carnival in the world, with more than half a million visitors, Carnaval de Québec sprawls from Quebec City’s Plains of Abraham park onto the St. 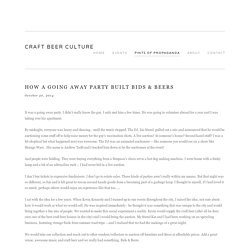 I didn’t really know the guy. I only met him a few times. He was going to volunteer abroad for a year and I was taking over his apartment. By midnight, everyone was boozy and dancing - until the music stopped. The DJ, his friend, pulled out a mic and announced that he would be auctioning some stuff off to help raise money for the guy’s vaccination shots. And people were bidding. I don’t buy tickets to expensive fundraisers. I sat with the idea for a few years. We would take our collection and reach out to other vendors/collectors to auction off furniture and décor at affordable prices. Like a lot of people I know, I’m at the point in life where hitting up a bar on Friday night has lost some of its magic.