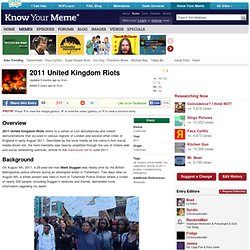 Described by the local media as the nation’s first social media-driven riot, the herd mentality was heavily amplified through the use of mobile web and social networking services, similar to the Vancouver riot in June 2011. Background On August 4th, 2011, a 29-year-old man Mark Duggan was fatally shot by the British Metropolitan police officers during an attempted arrest in Tottenham. Two days later on August 6th, a street protest was held in front of Tottenhan Police Station where a crowd of nearly 200 people, including Duggan’s relatives and friends, demanded more information regarding his death.

2011 Virginia Earthquake. Overview East Coast Earthquake refers to the seismic activity that occurred across the east coast of the United States on August 23rd, 2011. 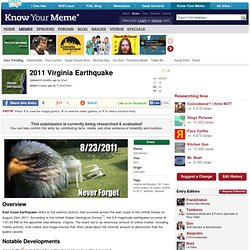 According to the United States Geological Survey, the 5.8 magnitude earthquake occurred at 1:51:04 PM at the epicenter near Mineral, Virginia. The event led to an enormous amount of online chatter, including Twitter activity, viral videos and image macros that often joked about the minimal amount of destruction that the quake caused. Notable Developments Jason Kottke posted about the earthquake nearly an hour after it occurred: This afternoon, an earthquake hit Virginia between Charlottesville and Richmond. MSNBC writer Helen A.S. On Twitter According to Trendistic, Twitter activity for “earthquake” peaked at 2:00pm on August 23rd, 9 minutes after the recorded quake activity at the Virginia epicenter. 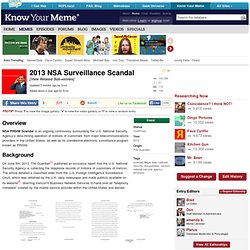 National Security Agency’s data-mining operation of millions of customers from major telecommunications providers in the United States, as well as its clandestine electronic surveillance program known as PRISM. Background On June 5th, 2013, The Guardian published an exclusive report that the U.S. 2013 Russian Meteor Explosion. Overview 2013 Russian Meteor Explosion refers to the meteorite impact event that took place over the Chelyabinsk region in Siberia, Russia on February 15th, 2013. 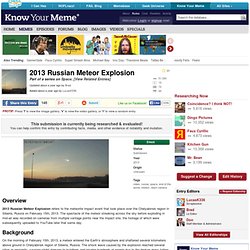 The spectacle of the meteor streaking across the sky before exploding in mid-air was recorded on cameras from multiple vantage points near the impact site, the footage of which were subsequently uploaded to YouTube later that same day. Background On the morning of February 15th, 2013, a meteor entered the Earth’s atmosphere and shattered several kilometers above ground in Chelyabinsk region of Siberia, Russia. 2013 U.S. Government Shutdown. 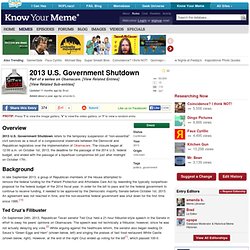 2014 Hong Kong Protests. Overview 2014 Hong Kong Protests, also known as Occupy Central With Love and Peace, refer to ongoing pro-democracy demonstrations in Hong Kong against the Chinese government’s proposed electoral reform which would require the pre-approval of political candidates by a nomination committee before proceeding to a vote by the general population. 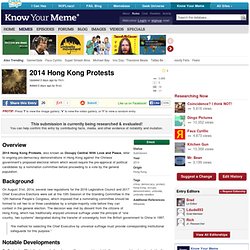 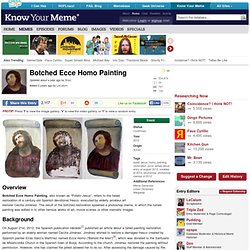 The result of the botched restoration spawned a photoshop meme, in which the ruined painting was edited in to other famous works of art, movie scenes or other memetic images. Background On August 21st, 2012, the Spanish publication Heraldo published an article about a failed painting restoration performed by an elderly woman named Cecilia Jiménez. Charles Ramsey's Interview. Overview Charles Ramsey is a Cleveland, Ohio resident who rose to internet fame in early May 2013 after assisting three women who had been missing for nearly a decade after being abducted by captor Ariel Castro. 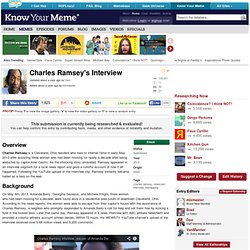 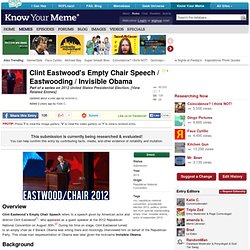 During his time on stage, Clint Eastwood turned to an empty chair as if Barack Obama was sitting there and mockingly interviewed him on behalf of the Republican Party. This straw man respresentation of Obama was later given the nickname Invisible Obama. Hawthorne Dog Police Shooting. Overview Hawthorne Dog Police Shooting refers to the fatal shooting of a 2-year-old Rottweiler dog by police officers during the roadside arrest of its owner Leon Rosby in Hawthorne, California. 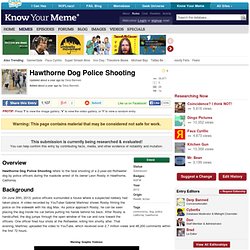 Osama Bin Laden's Death. Overview Osama bin Laden was the founder of al-Qaeda, the jihadist organization responsible for the September 11 attacks on the United States, along with many other terrorist attacks against civilian and military targets. In early May 2011, after almost ten years of manhunt in the Middle East, bin Laden was killed by the U.S. Special Forces in Pakistan. Pizza is a Vegetable. Overview. Red Bull Stratos / Felix Baumgartner's Jump. The Fappening / Celebgate. Tupac Hologram. You Didn't Build That. Overview “You Didn’t Build That” is a quote uttered by President Barack Obama during his campaign speech in Roanoke, Virginia on July 13th, 2012. Hotline Bling. About “Hotline Bling” is a 2015 single by the Canadian hip-hop and R&B artist Drake. Following the release of the song’s music video, which features the artist dancing in a color-shifting cube-like structure, it became popular among fans, spawning parodies, remixes, and reaction images.