FULL TEXT: President Duterte's 1st State of the Nation Address. The 100-minute-long speech is delivered in English, and punctuated by ad-libs in Filipino and Bisaya Rappler.com Published 7:36 PM, July 25, 2016 Updated 12:42 AM, July 26, 2016 MANILA, Philippines – Trusted by practically all Filipinos, President Rodrigo Duterte delivered on Monday, July 25, his first State of the Nation Address (SONA), making major policy pronouncements on the peace negotiations, the anti-drug war, income tax reform, and transportation, among others. 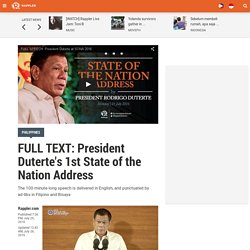 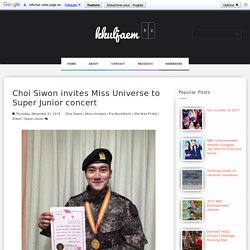 2. [+785, -10] Why did they not give him an award? ㅜㅠㅠ His performance was great though ㅠㅠㅠㅠㅠ. Saranghae Korea: The Truth Behind Old Nasty Tweets of Miss Universe 2015 for Siwon. After the controversial coronation night, Miss Universe 2015 Pia Alonzo Wurtzbach, a proud representative of the Philippines, on her first day reign as the queen, is now facing another controversy, it’s a thing she maybe did in the past that’s haunting her at present, now that she’s wearing the weight of the crown. 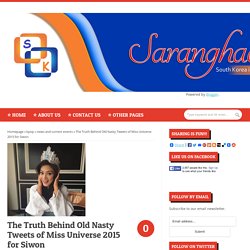 Apparently, Pia is a huge fan of Kpop. She’s a fan of Korean boy group Super Junior especially Siwon. Pia Alonzo Wurtzbach: Miss Universe 2015 Is An E.L.F. And Has A K-Pop Crush On Siwon Of Super Junior. Pia Wurtzbach’s K-pop crush Siwon invites her to tour. Photo Credit: Choi Siwon Sokor singer-actor invites Miss Universe to his band tourSuper happy Wurtzbach replies, thanks him for invitationBeauty queen is a known fan of the K-pop heartthrob MANILA, Philippines – From Simeon to Siwon. 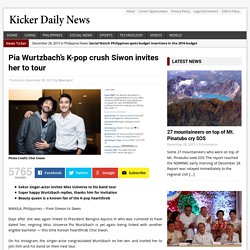 Days after she was again linked to President Benigno Aquino III who was rumored to have dated her, reigning Miss Universe Pia Wurtzbach is yet again being linked with another eligible bachelor — this time Korean heartthrob Choi Siwon. Super Junior's Siwon invites Miss Universe to the next 'Super Show!' The New Miss Universe Was a Huge Super Junior Fan (and Siwon Stan) On the Mayweather Victory and Why It Doesn’t Matter. It really wasn’t about the fight’s result in the end. 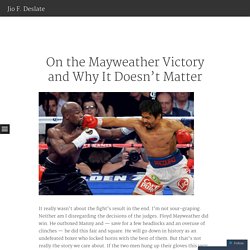 I’m not sour-graping. Neither am I disregarding the decisions of the judges. Floyd Mayweather did win. He outboxed Manny and — save for a few headlocks and an overuse of clinches — he did this fair and square. He will go down in history as an undefeated boxer who locked horns with the best of them. The great thing about boxing is that like any other sport it caters to our basest emotions in a relatively healthy way. Vegas crowd boos Mayweather after win over Pacquiao. Floyd Mayweather celebrates after defeating Manny Pacquiao via unanimous decision during their world welterweight championship bout at MGM Grand Garden Arena. 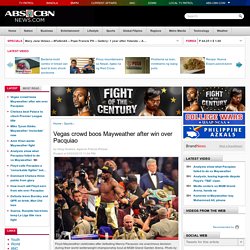 Photo by Joe Camporeale, USA TODAY/Reuters Floyd Mayweather danced his way to a unanimous decision over frustrated Manny Pacquiao here Saturday to win the richest fight in history and cement his place in the pantheon of boxing greats. Boos rang out from a pro-Pacquiao Las Vegas crowd as Mayweather's emphatic victory was confirmed by all three scorecards after 12 rounds of cat and mouse action. Pacquiao: ‘Still the people’s champ’ : The Pacquiao Files : Pacquiao vs Mayweather Jr. - INQUIRER.net. Bleacherreport. 5 Ways Filipinos Insulted the Pope in his Visit. 1. 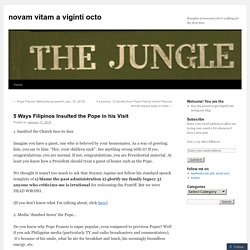 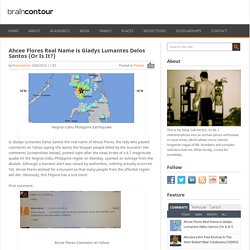 Her comments (screenshots below), posted right after the news broke of a 6.7 magnitude quake hit the Negros-Cebu Philippine region on Monday, sparked an outrage from the Bisdaks. Although a tsunami alert was raised by authorities, nothing actually occurred. Top 10 Deadliest Typhoons That Ravaged The Philippines. Brace yourselves everyone, another typhoon is coming… and always will be coming to us. 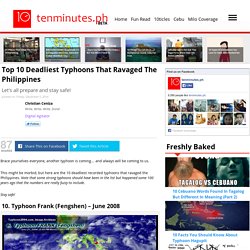 This might be morbid, but here are the 10 deadliest recorded typhoons that ravaged the Philippines. Note that some strong typhoons should have been in the list but happened some 100 years ago that the numbers are really fuzzy to include. Stay safe! 10. Typhoon Frank (Fengshen) – June 2008 www.typhoon2000.ph. Philippines: History of Public Enemy.

Nicasio Salonga, alias Asiong Salonga OCTOBER 7, 1951: “ASIONG SALONGA,” TONDO’S No.1 TOUGHIE, SHOT DEAD In the later part of the 40s and early part of the 50s, the name Asiong Salonga brought fears and chills to the residents of Tondo and its environs. 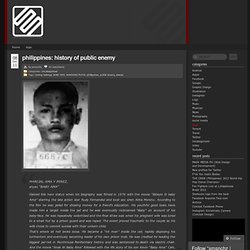 24 ORAS [FULL COMPLETE EPISODE] - 15 October 2013 Balita sa 7.2 magnitude earthquake sa Bohol & Cebu. Philippines: A country prone to natural disasters. The Philippines has suffered from an inexhaustible number of deadly typhoons, earthquakes, volcano eruptions and other natural disasters. This is due to its location along the Ring of Fire, or typhoon belt – a large Pacific Ocean region where many of Earth’s volcanic eruptions and earthquakes occur. Annually, approximately 80 typhoons develop above tropical waters, of which 19 enter the Philippine region and six to nine make landfall, according to the Joint Typhoon Warning Center (JTWC). The Philippines is in fact the country most exposed to tropical storms in the world. Violent tropical storms, such as the latest Haiyan typhoon, can generate 10 times as much energy as the Hiroshima atomic bomb.

A total of 25 tropical cyclones have entered the country this year, surpassing the average of 19 to 20 cyclones annually, the Philippine Atmospheric, Geophysical and Astronomical Services Administration (PAGASA) said. On Nov. 8, Super Typhoon Yolanda (international name Haiyan) slammed Tacloban City, Leyte, Samar and other provinces in Eastern Visayas with strong winds and storm surges as high as seven meters, killing more than 6,000 people.