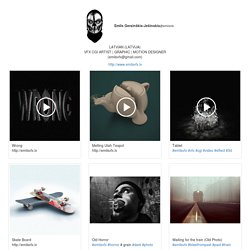 Noodly-Line Solver (Houdini VEX) So I’ve seen a lot of tests of this effect recently, and thought I’d jump in and do my own version. 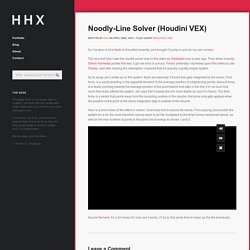 The very first time I saw the noodle solver was in this video by Deskriptiv over a year ago. Then when recently Simon Holmedal posted this test, it got me kind of curious. Finally yesterday I stumbled upon this video by Jan Fischer, and after reading the description I realized that it’s actually a pretty simple system. So to recap Jan’s write-up on the system: there are basically 3 forces that gets integrated by the solver. First force, is a vector pointing in the opposite direction to the average position of neighboring points. Here is a short video of the effect in motion. Source file here.

Houdini Video Tutorials — Arthur Yidi. ANDREAS BÖINGHOFF. Hey all there, when it comes to do fluid simulations in Houdini it is often necessary to be able to re-time the caches after the simulation. 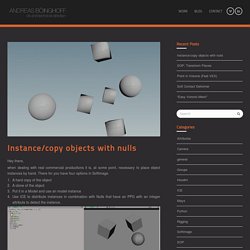 In principle that is not a big deal – just an interpolation between two frames. It gets a little harder if we have a constant emission which leads to a changing point count. In this case we have to build a setup like this. First we start with a Null that gets three float Parameters as a input (Current Frame, Frame A and Frame B). Houdini procedural building generator - CGPress. Unreal Engine 4: Procedural building generation + light... EDIT: It's old and sketchy stuff ;) Created in the days of UE 4.2. 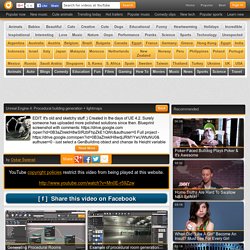 Surely someone has uploaded more polished solutions since then. Blueprint screenshot with comments: Full project - - just select a GenBuilding object and change its Height variable value. Meshes are marked as Static, so the lighting can be baked on them as normally :) It's a great feature of UE4 to have auto-generated stuff behaving like it was an imported mesh. Shop Vizy Acky — Garman Herigstad. Tutorial 49 - Controlling Particles with User Data and VOP POPs - Think Particle. This video, Watches and Golden ratio. Untitled. SideFX.

Houdini Tutorials. All the video tutorials were originally created using the XviD codec at varying resolutions, but I have since moved them to Vimeo. 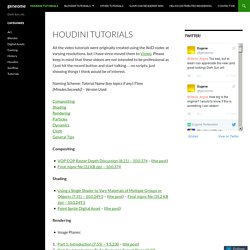 Please keep in mind that these videos are not intended to be professional as I just hit the record button and start talking… no scripts, just showing things I think would be of interest. Naming Scheme: Tutorial Name (key topics if any) (Time [Minutes:Seconds]) – Version Used. CompositingShadingRenderingParticlesDynamicsClothGeneral Tips. Houdini. Particle Sprays with Chops in Houdini [ #Houdini ]Chops provide a really robust way of visualizing your channel functions and building some really crazy complex motion quickly. 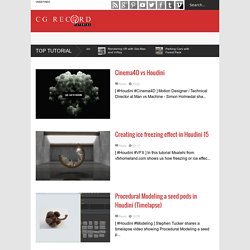 Let's check out Particle Sprays with Chops in Houdini tuto... Houdini Crowd Agent tutorial - FBX Load [ #Animation ]Learn how to import an .fbx character file and set it to the clip you want to use. Then you can make a crowd with that character and break up the uniformity of the crowd by using Rand... Houdini City destruction by LI Black‎ - CG Record TV. Онлайн тренинг по созданию VFX в Houdini. CG Fluid Effects – Fusion CI Studios. FluidFX with Houdini introduction. RealFlow Tutorials > Fundamentals of RealWave in RealFlow > Creating Ocean Spray with RW Particles Tutorial > Pluralsight. Houdini Tutorials. English. 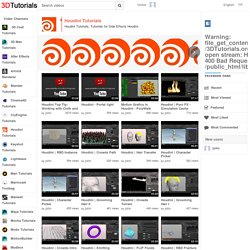 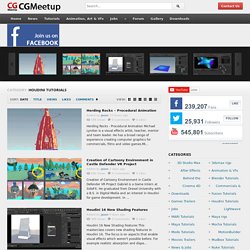 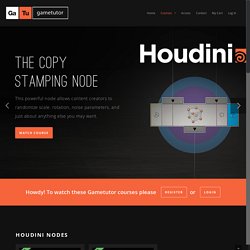 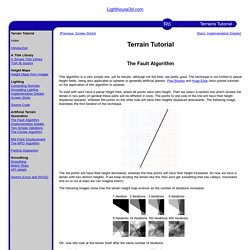 The technique is not limited to planar height fields, being also applicable to spheres to generate artificial planets. Paul Bourke and Hugo Elias have posted tutorials on the application of this algorithm to spheres. To start with we'll have a planar height field, where all points have zero height. Then we select a random line which divides the terrain in two parts (in general these parts will be different in size).

We will specifically focus on the advantages of RMS and how it can help us decrease setup time without compromising efficient render times. We will divide the training into two distinct approaches to rendering via RenderMan Studio's RIS and REYES rendering architectures. The training will cover the interactions between RMS and Maya for general rendering workflows, Mudbox and Zbrush for importing texture and displacement maps, as well as Fusion and Nuke for Compositing. With this in mind, previous experience with these applications is helpful. Bullet physics implementation and other stuff - SideFX. Untitled. Eetu's lab - Work in Progress.

HOUDINI OTL : normals on curve! Hi everyone ! Yes that’s true , we are talking about Houdini. I have been a long time Maya user , I started back in 2006! Bullet physics implementation and other stuff - SideFX. Tom O'Bready on Vimeo. March 2014 VHUG. I presented some Flip and Point Advection stuff at the March 2014 Vancouver Houdini User Group. The files are here for anybody who was there or anybody interested: VHUG file (200 something megs.

This has the hip file and also the quicktimes and one frame of geo from the rest field setup) Fliptricks hip file Pyro Point Advect / Color Volume file I have two hip files. The second is a setup that uses Gas Advect to advect points along with a high velocity pyro sim. Flip Tricks (VHUG – March 2014) from Ian Farnsworth on Vimeo. Rnd_textureflow_pt1. In our latest feature movie I have developed a lot of procedural animated water surfaces. Starting from small puddles to huge ocean surfaces - all this stuff was created using procedural custom noises, including Houdini Ocean Toolkit and 2d ripple solver. For a few close-up shots I used FLIP simulations sewed with animated plates. To enhance spatial details I used texture displacement projected with a simple planar projection.

So next I faced the task of creating large scale water simulation. After making some tests I came to conclusion that I can not avoid using texture displacement. Eetu's lab - Work in Progress. Additive and Subtractive Color Mixing. The world is full of colors. Some researchers report that humans can distinguish about 16 million different colors. But what's more interesting is that most of the colors we see around us and all the colors we see on a TV or computer monitor can be created from just three different colored lights. How are all the colors made from just three different colors? Simply by combining the light in different ratios. That's it. Additive Colors Colored lights are mixed using additive color properties.