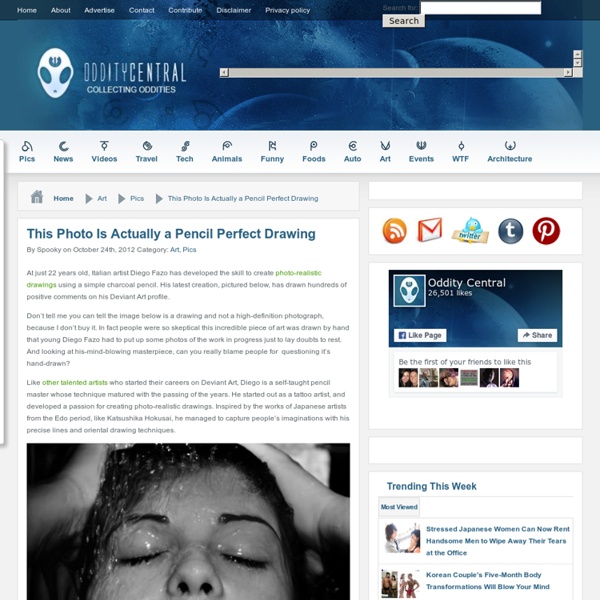 At just 22 years old, Italian artist Diego Fazo has developed the skill to create photo-realistic drawings using a simple charcoal pencil. His latest creation, pictured below, has drawn hundreds of positive comments on his Deviant Art profile. Don’t tell me you can tell the image below is a drawing and not a high-definition photograph, because I don’t buy it. In fact people were so skeptical this incredible piece of art was drawn by hand that young Diego Fazo had to put up some photos of the work in progress just to lay doubts to rest. And looking at his-mind-blowing masterpiece, can you really blame people for questioning it’s hand-drawn? Like other talented artists who started their careers on Deviant Art, Diego is a self-taught pencil master whose technique matured with the passing of the years. Scroll down for more of his awesome drawings, and check out his Deviant Art profile, as well. Reddit Stumble

Juan Francisco Casas creates realistic images using BIC Pens EmailEmail At first sight they may look like some pretty sharp blue photographs, however all those pictures are actually hand drawn with a simple Bic ballpoint pen! Spanish artist Juan Francisco Casas uses up to four 14p ballpoint pens to create his incredibly photorealistic drawings, measuring up to 10ft (3 meters) high. The use of penballs makes Juan’s drawings even more original, which certainly has played a big role in his way to success, and his works are already a sell-out at exhibitions. His source of inspiration comes from his own photographs of nights out with his friends, so you can only imagine how wild his parties are, as half of his drawings include girls that forgot to put on their clothes. Website: juanfranciscocasas.com

Gorgeous Hand Drawn Illustrations by Si Scott Here you have a series of illustrations called “animals” by Si Scott. Every design is hand drawn perfection! You can tell he has an incredible attention to detail. Enjoy! Helvetica: How did one typeface conquer the world? 28 February 2014Last updated at 20:17 ET Magazine Monitor A collection of cultural artefacts Mike Parker who helped popularise Helvetica died this week.

13 Disturbing Works of Art by Female Artists After we posted 13 Disturbing Pieces of Art from History , several readers pointed out that none of the works were created by female artists. So, here are 13 more disturbing pieces of art, and they’re all created by women. 1. Artemesia Gentileschi - Judith and her Maidservant The most remarked-upon absence from the previous list was Artemesia Gentileschi’s version of Judith Slaying Holofernes (as opposed to the Caravaggio, Judith Beheading Holofernes , that we featured). Feel free to click on each and decide which you prefer! Illustrator Michal Lisowski Michal Lisowski – artist and illustrator. Lives and works in Warsaw, Poland. His lively and original style was appreciated by companies such as Disney, B-win, MTV, Orlen, Orange, Play, Kinder, Skoda and Nescafe. www.michallisowski.com

Post-It Note Monsters by John Kenn I love how these monster drawings channel the spirits of Edward Gorey and Maurice Sendak in perfect measure. Created in artist John Kenn’s spare time (between raising twins and directing childrens shows) each of these images is very tiny: it was drawn using only office supplies on Post-It notes. Check out Kenn’s large collection of top-notch work at johnkenn.blogspot.com. Known in some circles as the most amazing man in the universe, he once saved an entire family of muskrats from a sinking, fire engulfed steamboat while recovering from two broken arms relating to a botched no-chute wingsuit landing in North Korea. When not impressing people with his humbling humility, he can be found freelance writing, finding shiny objects on the internet, enjoying the company of much-appreciated friends and living out his nomadic nature.

Pencil drawings by Kate Riley The British artist Kate Riley (Cath Riley) draws only with a pencil. Her ascetic work evaluated Nike, GQ, M & C Saatchi and The New York Times. Many of the works of Kate are in private collections of British, American and Swiss collectors. Why is Japan such an unpopular tourist destination? You would think that a country like Japan, rich as it is in both traditional culture and technical innovation, as well as plenty of weird and wacky things you’ll never see elsewhere, would be a huge hit with tourists. But as it turns out, Japan is actually not such a popular destination for people traveling abroad. Tourism from abroad brings in around 900 billion yen per year for Japan. To put it in perspective, France makes around 5 trillion, the UK 3 trillion, Germany 3.7 trillion, and America 11 trillion yen from tourism. It might look like just a matter of zeroes on paper, but that’s a significant difference. So just why is this beautiful country which has so much to offer such an unpopular holiday destination?