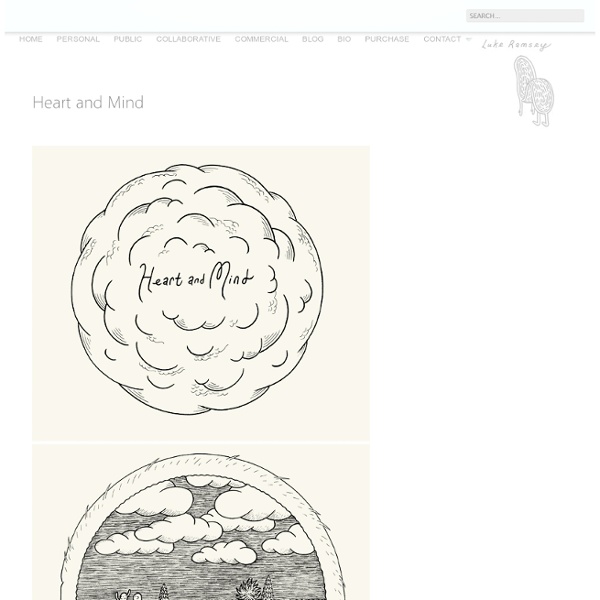 This is a story that shows the transformation of a baby to an elderly man. The baby’s mind is born with a peaceful mind, but as it grows older it’s mind becomes corrupt. The heart eventually prevails. Large print available- Buy Online ‹‹return to portfolio

Lackadaisy Expressions Boy, I didn't know what I was getting myself into when I started this. I've had requests for some sort of expressions tutorial dating back a while now, so I figured, "Sure! I can explain expression drawing...and it'll be way better than all those tutorials out there that are nothing but charts of generic expressions. Yeah! Um. Anyway, I found all I could really do was try to explain ways to teach yourself...and then add some pictures. Big Doodle Big sharpie doodle! Big Doodle - sharpie on mat board - 40" x 32" Artwork © Lawrence Yang 2009 my blog | my site | purchase inquiries Satiric Artworks by Pawel Kuczynski | Pondly Article by James Pond I am the owner of Pondly.com / art lover / electrical engineer / software developer / MBA in e-business student. I blog for pleasure and love to share my Internet findings. Incredible and creative work by the Polish Artist. Website Do you want more visual fun?

Evolution Here then is the beta version of my strip about evolution. This is a chapter of the book Science Stories which will be out from Myriad Editions next spring. I'm sure there'll be mistakes here, so do feel free to point them out, so that I can make the necessary changes. Thank you. Note Oct 2013. Hi All.

Stuff no one told you: Simple truths of life At some point in 2010, Alex Noriega, illustrator from Barcelana, was going through a crisis due to some isues at work. He decided to start a blog as a way of trying to find what he was doing wrong. He wanted to put on paper all that he had learned in life as simple as possible and try to see if what was happening around him made any sense. And it didn’t Still, his work is great and we are happy to present it to you! bedtime paradox A couple of things today! One, a sort of un-announcement? I never really announced that I would be at the Calgary Expo cus I was never sure if I could make it! Now I am sure that I will NOT be able to go. The only other show I am very sure that I will be going to this year is SPX.

Amazing drawings by Joe Fenton After studying sculpting at the Wimbledon School of Art, I went on to work for a few years in the film industry for directors such as Terry Gilliam and for companies such as Disney and Miramax as a film concept designer and sculptor in both London and Prague. I then moved to New York where I received my first publishing contract with Simon & Schuster for my children’s book as illustrator and writer of What’s under the bed? What’s under the bed? was selected by Cheerios spoonful of stories programme to be resized and placed in 1.5 million boxes of Cheerios in the USA. My second book titled Boo! Solitude Pride Tick Tock The marauders banquet Serenity Genesis Official website You might also like Comments Michael Dachstein Inspiration junkie :)

Sharpie Art - Extreme Sharpie Artwork at WomansDay.com Nowadays, Sharpie markers come in more than basic black––they’re available in every color of the rainbow, and in just about every size and shape. They’re great for everyday labeling and organizing, but did you know that they could also be used to decorate everything from guitars to fingernails? WD teamed with Sharpie to find the most unique creations from talented artists across the globe. From a Lamborghini turned objet d’art to a wall mural, check out how different artists uncapped their creativity. Rev Your Engines George Ramos spent two weeks on this intricately designed Lamborghini––he used Sharpie markers to create the design and then topped it off with a clear coat of paint to protect the pattern. Lend a Hand The talented (and patient!) Rock and Roll Peter Bragino created a custom design on his Ibanez guitar using an industrial-strength Sharpie marker––no sanding or topcoat was needed to preserve the long-lasting design. Space Out Detail Oriented Feet First Speed Racer Off the Wall

22 Sweet and Surreal Illustrations Italian illustrator Alessandro Gottardo's beautiful, open and inviting illustrations have been featured in major newspapers and magazines including The New York Times, The Wall Street Journal, TIME, The Economist and Newsweek among others. He's won numerous awards including the gold medal from The Society of Illustrators New York in 2009. Gottardo's clever illustrations show us why a minimalist approach can go a long way in telling a story. By taking out all that's unnecessary and distilling ideas down to very basic forms and shapes, Gottardo makes us believe that complicated concepts can be illustrated in surprisingly simple ways. Love the sweet and surreal nature to these. Added: After we finished this post, we got in touch with Gottardo for an interview. Alessandro Gottardo also goes by the name Shout. "One day, maybe I will say things that are truly worth listening to, I will say things that belong to me only, and there will be no other way to listen to them EXCEPT looking."

Never Be My Friend When I'm bored, I browse through my friends' Facebook images, choose my favorites, and draw them. Sometimes I take... liberties. Let's just call it artistic license. R.I.P. when I drew you looking like a corpse. I occasionally wonder why I still have friends at all.