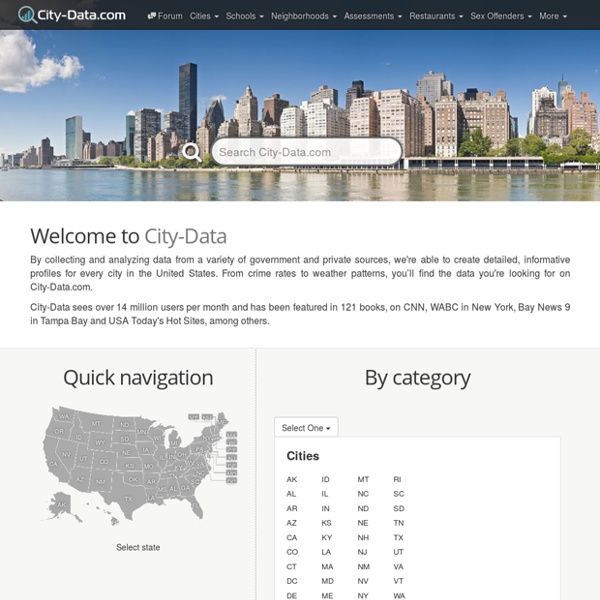 Visited by over 21 million unique visitors in March 2014, featured in 121 books, on CNN, WABC in New York, Bay News 9 in Tampa Bay, and USA Today's Hot Sites We've collected and analyzed data from numerous sources to create as complete and interesting profiles of all U.S. cities as we could.

About Us About Us Ken Brown & Sons, Inc. opened in April of 1985 with the mind set of being the best plumbing supply company in the New Orleans Metro area. We've achieved our goal and are now proudly serving many of the best plumbers this city has to offer. Our customers look to us for quality products and incredible service. North Carolina History: A Digital Textbook - LEARN NC Primary sources, multimedia, readings, and lesson plans to tell the many stories of North Carolina's past. Replace your textbook — or enhance your teaching with selections. Get started Sampler An overview with samples of the kinds of readings, primary sources, and multimedia available. Turning America into a Battlefield: A Blueprint for Locking Down the Nation Turning America into a Battlefield: A Blueprint for Locking Down the Nation By John W. Whitehead April 27, 2015 In the councils of government, we must guard against the acquisition of unwarranted influence, whether sought or unsought, by the military industrial complex. The potential for the disastrous rise of misplaced power exists and will persist. We must never let the weight of this combination endanger our liberties or democratic processes.

What is Placemaking? What if we built our communities around places? As both an overarching idea and a hands-on approach for improving a neighborhood, city, or region, Placemaking inspires people to collectively reimagine and reinvent public spaces as the heart of every community. Strengthening the connection between people and the places they share, Placemaking refers to a collaborative process by which we can shape our public realm in order to maximize shared value. The Open Data 500: Putting Research Into Action - Open Data Now The Open Data Compass: Exploring the Open Data 500 Follow this site on Twitter and subscribe to biweekly Open Data Now Insights This post originally appeared on the GovLab blog On April 8, the GovLab at NYU, where I am senior advisor, made two significant announcements.

Transatlantic Trade and Investment Partnership This article is about the regulation and trade agreement. For the chemical compound abbreviated as TTIP, see Titanium isopropoxide. The Transatlantic Trade and Investment Partnership (TTIP) is a proposed free trade agreement between the European Union and the United States, with the aim of promoting multilateral economic growth.[1] The American government considers the TTIP a companion agreement to the Trans-Pacific Partnership (TPP).[2] After a proposed draft was leaked in March 2014,[3] the European Commission launched a public consultation on a limited set of clauses and in January 2015 published parts of an overview.[4] If an agreement is to be made, it is not expected to be finalized before 2016.[5] European Citizens' Initiative against TTIP and CETA, named "Stop TTIP", has been established, acquiring over 3.2 million signatures within a year.[6][7] Background[edit] Proposed contents[edit]

The World Factbook The Office of Public Affairs (OPA) is the single point of contact for all inquiries about the Central Intelligence Agency (CIA). We read every letter, fax, or e-mail we receive, and we will convey your comments to CIA officials outside OPA as appropriate. However, with limited staff and resources, we simply cannot respond to all who write to us. Contact Information Submit questions or comments online United States of Newspeak – Obama Calls Executive Orders “Presidential Memoranda” to Avoid Scrutiny and Issues Most in History If there’s one thing we have learned about Barack Obama, it’s that he is a master of deception and absolutely loves to lie to the public. He seems to enjoy conning the plebs to such a degree, I think he actually receives blasts of dopamine every time he does it. The bigger the lie, the better the rush. The latest example relates to his issuance of executive orders, or lack thereof, something that Obama Inc. has actively attempted to portray as evidence of his restraint when it comes to executive power.

The Public Realm Creates the City It would not be unfair to characterize the growth we are experiencing as “astronomical,” even in light of the current, apparent, slow down. Some believe we are experiencing a seismic shift; the very fabric of the city is being redefined with every newly approved application, and it’s tempting to question whether the “centre will hold.” I was at a conference recently in the American Midwest where Toronto was identified as “the fastest growing city in the world,” and the comment rang in my ears. What does this mean? At the very least, it means we are experiencing change at a rate that most of us - and our policy frameworks – did not fathom. The future will be fundamentally different from the present; if we do not consider and attempt to anticipate the implications of this growth, we face unintended consequences.

How Bilderberg Will Use Technology to Rule by 2050 Aaron DykesActivist Post Are you ready, or do you have any idea what the future has in store? Bilderberg 2014 focused on technology – with mass surveillance and Big Data putting an “end to privacy” and initiating dominance from an “Internet of Things” where we live in public, and under the thumb of digital control. Watch this special video report: The End of Privacy, the Era of Big Data and the Rise of the Internet of Things (IoT) are all milestones in an ongoing plan for social control – taking shape and updating annually at the elitist Bilderberg conferences. 2014 only amplified that trajectory… The lure of the infinite possibilities of the Internet, the convenience of “smart” gadgets, endless entertainment and various environmental pretexts are letting “them” take control of a world where they monitor your lives and steer it via digital authorizations and a digital global currency.

This Big City - ideas for sustainable cities March 9, 2010 by Joe Peach Yesterday, eVolo magazine announced the winners of their 2010 Skyscraper Competition, an award that aims to ‘discover young talents whose ideas will change the way we understand architecture and its relationship with the natural and built environments.’ The nine jurors selected 3 prizes and 27 special mentions out of 430 entries from 42 countries, and considered factors such as globalisation, sustainability, flexibility, adaptability, and the digital revolution when making their considerations. The First Prize went to Malaysian Architecture students Chow Khoon Toong, Ong Tien Yee, and Beh Ssi Cze, for their prison in the sky, pictured above. Inmates would live in a free and productive society with farming and factories supporting the world below.