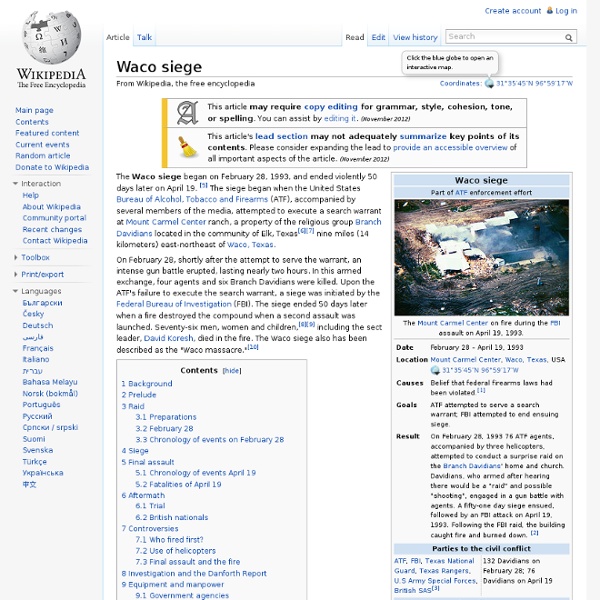 Oklahoma City bombing The Oklahoma City bombing was a domestic terrorist bomb attack on the Alfred P. Murrah Federal Building in downtown Oklahoma City on April 19, 1995. It remained the most destructive act of terrorism committed in the United States until the September 11 attacks of 2001. The bombing killed 168 people[1] and injured more than 680 others.[2] The blast destroyed or damaged 324 buildings within a 16-block radius, destroyed or burned 86 cars, and shattered glass in 258 nearby buildings,[3][4] causing at least an estimated $652 million worth of damage.[5] Extensive rescue efforts were undertaken by local, state, federal, and worldwide agencies in the wake of the bombing, and substantial donations were received from across the country. The Federal Emergency Management Agency (FEMA) activated eleven of its Urban Search and Rescue Task Forces, consisting of 665 rescue workers who assisted in rescue and recovery operations.[6][7] Planning[edit] Motivation[edit] Target selection[edit] Alfred P.

Ruby Ridge Ruby Ridge was the site of a deadly confrontation and siege in northern Idaho in 1992 between Randy Weaver, his family, and his friend Kevin Harris and agents of the United States Marshals Service (USMS) and Federal Bureau of Investigation (FBI). The events resulted in the death of Weaver's son Sammy, his wife Vicki, and Deputy U.S. Marshal William Francis Degan. At the subsequent federal criminal trial of Weaver and Harris, Weaver's attorney Gerry Spence made accusations of "criminal wrongdoing" against every agency involved in the incident: the FBI, the USMS, the Bureau of Alcohol, Tobacco, and Firearms (ATF), and the United States Attorney's Office (USAO) for Idaho. At the completion of the trial, the Department of Justice's Office of Professional Responsibility formed a Ruby Ridge Task Force to investigate Spence's charges. The 1994 task force report was released in redacted form by Lexis Counsel Connect, an information service for attorneys. Development[edit] ATF involvement[edit]

Faubion, J.: The Shadows and Lights of Waco: Millennialism Today (Paperback and Ebook) When James Faubion visited the site of the Branch Davidian compound after its conflagration, what he found surprised him. Though the popular imagination had relegated the site's millennialist denizens to the radical fringe, Faubion found not psychopathology but a sturdy and comprehensive system for understanding the world. He also found, in the person of Amo Paul Bishop Roden, a fascinating spokeswoman for that system. Based on more than five years of fieldwork, including extensive life-history interviews with Roden, Faubion interprets millennialism as a ''master-pedagogy.'' He reveals it as simultaneously a poetics, a rhetoric, a physics, an approach to history, a course of training, a gnosis, and an ethics. This disjunction prompts Faubion to investigate how the mainstream came to confine religion to an inner and other-worldly faith--an inquiry that allows him to account for the irrationalization of millennialism. James D.

Caffeinated 'Vomit Drink' Nauseated North America's First City Caffeine-loaded black drinks apparently dominated the heartland of America earlier than once thought — a beverage neither coffee nor cola, but instead brewed from holly leaves, researchers say. The ancient people may have downed the brew before ritual vomiting as part of purification ceremonies, the scientists added. The discovery was made after investigating artifacts from Cahokia, "North America's first city," researcher Thomas Emerson, the director of the Illinois State Archaeological Survey, told LiveScience. Cahokia existed near the confluence of the Missouri and Mississippi Rivers from about 1050 to 1350 in what is now in St. Louis, East St. Louis and the surrounding five counties, and inspired short-lived settlements as far away as Wisconsin. The pre-Columbian settlement at Cahokia was the largest city in North America north of Mexico, with as many as 20,000 people living there at its peak. Brew beakers "We're not sure when Native Americans stopped using black drink," Emerson said.

Customer reviews: Waco : The Big Lie Oklahoma City bombing conspiracy theories A variety of conspiracy theories have been proposed regarding the Oklahoma City bombing. These theories reject all or part of the official government report. Some of these theories focus on the possibility of additional, unindicted co-conspirators or additional explosives planted inside the Murrah Federal building. Other theories allege that government employees and officials, including US President Bill Clinton, knew of the impending bombing and intentionally failed to act on that knowledge. Government investigations have been opened at various times to look into the theories. Oklahoma City Bombing[edit] At 9:02 a.m. Although the indictment against McVeigh and Nichols alleged that they conspired with "others unknown to the grand jury", prosecutors, and later McVeigh himself, said the bombing was solely the work of McVeigh and Nichols. Additional conspirators[edit] Additional explosives[edit] US federal government involvement[edit] Investigations[edit] See also[edit] References[edit]

Scientists Peg Anthropocene to First Farmers 99 Shares Share Tweet Email A new analysis of the fossil record shows that a deep pattern in nature remained the same for 300 million years. “When early humans started farming and became dominant in the terrestrial landscape, we see this dramatic restructuring of plant and animal communities,” said University of Vermont biologist Nicholas Gotelli, an expert on statistics and the senior author on the new study. In the hunt for the beginning of the much-debated “Anthropocene” — a supposed new geologic era defined by human influence of the planet — the new research suggests a need to look back farther in time than the arrival of human-caused climate change, atomic weapons, urbanization or the industrial revolution. “This tells us that humans have been having a massive effect on the environment for a very long time,” said S. Examining thousands of pairs of species, the scientists looked to see how often a particular pair of plant or animal species was found within the same community.

Ashes of Waco Selections from journalist Dick Reavis’ research into the raid, siege and burning of the Branch Davidians’ Mount Carmel Center near Waco, Texas by the Bureau of Alcohol, Tobacco and Firearms (BATF) and the FBI, as well as background on the Branch Davidian religious sect who lived there. The main purpose of the investigation was for his book, The Ashes of Waco although Reavis’ research went beyond the book’s publication as his role as an investigator/expert expanded. For example, included are audio tapes from Reavis’ research for his “Politics of Armageddon” article. The "Ashes of Waco" digital collection provides a sample of the documents, cassette tapes, video tapes, and images in the Waco Investigation portion of the Dick Reavis Papers. There are additional materials cataloged here which were not digitized; please contact the Wittliff Collections for access to these materials.

Iraq War Prior to the war, the governments of the United States and the United Kingdom claimed that Iraq's alleged possession of weapons of mass destruction (WMD) posed a threat to their security and that of their coalition/regional allies.[49][50][51] In 2002, the United Nations Security Council passed Resolution 1441 which called for Iraq to completely cooperate with UN weapon inspectors to verify that Iraq was not in possession of WMD and cruise missiles. Prior to the attack, the United Nations Monitoring, Verification and Inspection Commission (UNMOVIC) found no evidence of WMD, but could not yet verify the accuracy of Iraq's declarations regarding what weapons it possessed, as their work was still unfinished. The leader of the inspectors, Hans Blix, estimated the time remaining for disarmament being verified through inspections to be "months".[nb 2][52][53][54][55] Background[edit] Iraq disarmament and pre-war intelligence[edit] UN weapons inspections resume[edit] Yellowcake uranium[edit]

Reaganism and the rise of the carceral state In the moment of Black Lives Matter, with public awareness of mass incarceration and lethal force by police reaching new heights, it’s important to look back on the racial dimension of what I call “the Reagan era” and how that politics led us to where we are now. Today’s carceral state has its roots in the “war on crime” that took hold in America in the 1980s. That “war” was led by the political forces that I associate with Reaganism, a conservative political formation that generally favored a rollback of state power. All those who care about racial equality of a certain age are likely to remember the 1980s as a bleak time for people of color and for African Americans especially. While African American political power was growing in the city, at least by some measures, Ronald Reagan and the broader conservative movement he led were often openly hostile to urban America and African Americans. Amid this political context, the “war on crime” took hold.

Why Waco?: Cults and the Battle for Religious Freedom in America - James D. Tabor, Eugene V. Gallagher War in Afghanistan (2001–present) U.S. President George W. Bush demanded that the Taliban hand over Osama bin Laden and expel al-Qaeda. The Taliban requested that bin Laden leave the country, but declined to extradite him without evidence of his involvement in the 9/11 attacks. The United States refused to negotiate and launched Operation Enduring Freedom on 7 October 2001 with the United Kingdom. The two were later joined by other forces, including the Northern Alliance.[23][24] The U.S. and allies drove the Taliban from power and built military bases near major cities across the country. In 2003, NATO assumed leadership of ISAF, with troops from 43 countries. Though vastly outgunned and outnumbered, the Taliban insurgents, most notably the Haqqani Network and Hezb-e-Islami Gulbuddin, have waged asymmetric warfare with guerilla raids and ambushes in the countryside, suicide attacks against urban targets and turncoat killings against coalition forces. Historical background Origins of Afghanistan's civil war Al-Qaeda

Stranger than Strangelove: how the US planned for nuclear war in the 1950s Those who have written about the nuclear Cold War remain grateful to Stanley Kubrick for giving us the satirical 1964 film Dr Strangelove which captures the madness that swept the world for 40 years. The name Strangelove may be overused but the United States has now released a secret file that really does justify the sobriquet: “Stranger than Strangelove”. Almost anodyne in title, Atomic Weapons Requirements Study for 1959 is a truly shocking document, revealing the scale of the holocaust that would have been unleashed in a nuclear war. But a little context first. Back in 2006, the journalist Michael Dobbs filed requests for the declassification of many Pentagon Cold War documents. Meanwhile, Strategic Air Command (SAC) wanted a 60-megaton bomb – a weapon with the equivalent destructive power of over 4,000 Hiroshima devices. Nightmare scenario According to Burr, as far as can be told, no comparable document has ever been declassified for any period of Cold War history. Overkill