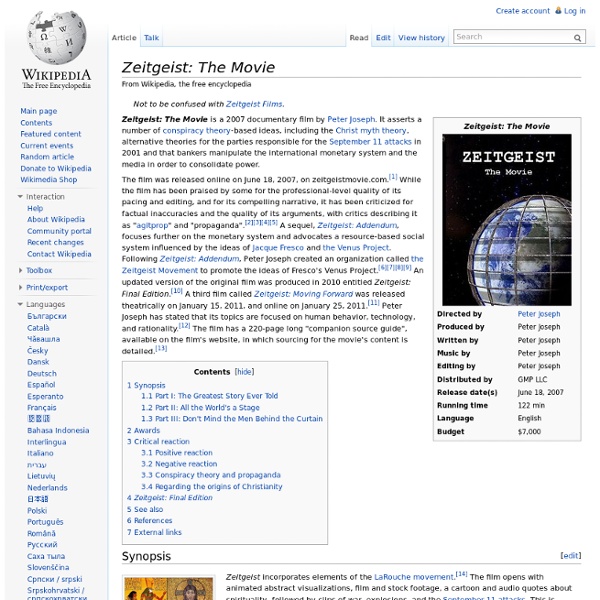 Zeitgeist: The Movie is a 2007 documentary-style film by Peter Joseph. It presents a number of conspiracy theory-based ideas, such as the Christ myth theory, conspiracy theories about the 9/11 attacks in 2001, and argues that bankers manipulate the media and international monetary system.[citation needed] Released online on June 18, 2007, at zeitgeistmovie.com, it became popular among conspiracy theorists.[1][2][3] Some critics have questioned the accuracy of its claims and the quality of its arguments, describing it as "agitprop" and "propaganda. Production history[edit] Zeitgeist: The Movie originated as an art project. Synopsis[edit] Horusleft and Jesus right, both presented in the film as "solar messiahs." The film opens with animated abstract visualizations, film and stock footage, a cartoon and audio quotes about spirituality by Chögyam Trungpa Rinpoche, followed by clips of war, explosions, and the September 11 attacks. Part I: The Greatest Story Ever Told[edit] Reception[edit] Related:  Conspiracy Theories • Art_and_More

Wild Animal (The Simple Dog Goes for a Joy Ride) My simple-minded dog recently went on an unplanned adventure. Because the simple dog is so very simple, her adventure was alarming and horrible for everyone involved. Even in her normal, familiar environment, the simple dog exists in a state of almost constant confusion. She also appears to have very little control over what she is doing or why she is doing it. For example, the other day, she was standing in the middle of the room just staring vacantly. But instead of completing a few rotations and then lying down like a normal dog, she got stuck in the repetitive motion and couldn't stop turning slowly in place. She is definitely not the type of animal that would thrive in the wild. Unfortunately, she managed to escape one day while we were out walking, and she very nearly became a wild animal. In the park where we were walking, there is a large horse statue. I chased her all the way across the park and into an adjacent neighborhood. She had forgotten who I was.

John Perkins (author) John Perkins (born January 28, 1945) is an American author. His best known book is Confessions of an Economic Hit Man (2004), in which Perkins claims to have played a role in an alleged process of economic colonization of Third World countries on behalf of what he portrays as a cabal of corporations, banks, and the United States government. Perkins has also written about mystical aspects of indigenous cultures, including shamanism. Perkins graduated from the Tilton School in 1963. He subsequently attended Middlebury College for two years before dropping out due to lackluster grades. He later earned a Bachelor of Science degree in business administration from Boston University in 1968. Perkins's time at Chas T. In the 1980s Perkins left Main and founded and directed an independent energy company. Perkins's books on mystical aspects of indigenous cultures, including shamanism, include:

2011 Lite-On Award 設計‧蛻變 Design for Change 人類自第一次工業革命開始，到近代雲端時代來臨，人類生活型態有了躍進式的變革，科技的發展亦大幅影響生活各個層面。因此，2014光寶創新獎強調設計必須與時蛻變，鼓勵設計師考量當下社會、文化與環境等要素去思考如何以設計作為介質，用科技改變世界，讓地球永續生存，開創人類美好生活。 2014光寶創新獎活動網站( Design For Change "Design for Change" is the theme of 2014 Lite-On Award which aims to spread the idea that design should change correspondingly to the trends. The registration of 2014 Lite-On Award will open soon in middle February ( Jacque Fresco Fresco writes and lectures his views on sustainable cities, energy efficiency, natural-resource management, cybernetic technology, automation, and the role of science in society. Fresco directs The Venus Project.[3] Fresco advocates global implementation of a socioeconomic system which he refers to as a "resource-based economy."[4][5] Early life Born March 13, 1916,[6] Jacque Fresco grew up in a Sephardi Jewish[7] home in Bensonhurst in the Brooklyn borough of New York City.[8]Fresco grew up during the Great Depression period. Fresco spent time with friends discussing Darwin, Einstein, science, and the future.[9] Fresco attended the Young Communist League. Career Aircraft Industry Fresco worked at Douglas Aircraft Company in California during the late 1930s.[10][11] Fresco presented designs including a flying wing[12] and a disk-shaped aircraft. Trend Home Fresco was commissioned by Earl Muntz, to design housing that was low cost. Scientific Research Laboratories Midlife Looking Forward Works

Tangled Up In Blue U.G Krishnamurti-Thought is Your Enemy GlobalGiving: donate to projects in the developing world supporting education, health, women and children, and more Jordan Maxwell's Home Page The Chronology of Hercule Poirot The Chronology of Hercule Poirot by Brad Mengel based on the biography by Anne Hart All cases are by Agatha Christie, unless stated otherwise. "Cases in Commas" denote a short story CASES IN CAPS denote novels 1864 Hercule Poirot and his twin bother Achille are born (Two points here: 1) There is some debate as to whether Achille is real or not, I am in favour of him being real; 2) A number of dates have been put forward for the birth of Poirot 1839 - 44, 1849- 54, 1864, 1884. 1864 The Holmes Family on their second continental tour visit the Poirots, who may be related through the Vernets (Suggested by the passage in THE LABOURS OF HERCULES where Poirot's friend Dr Burton is wondering how Poirot got his name "Thinking of an imaginary conversation. Circa 1893 Poirot Joins either the French or Belgian Secret Service 1901 "Did Sherlock Holmes Meet Hercule-?" 1904 Hercule Poirot joins the Belgian Police and immediately becomes involved in the Abercrombie Case with Inspector Japp. 1939 "Yellow Iris"