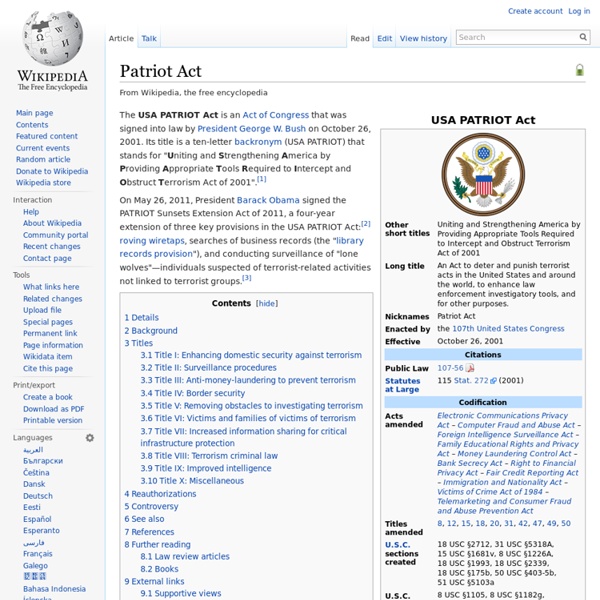 The USA PATRIOT Act is an Act of Congress that was signed into law by President George W. Bush on October 26, 2001. Its title is a ten-letter backronym (USA PATRIOT) that stands for "Uniting and Strengthening America by Providing Appropriate Tools Required to Intercept and Obstruct Terrorism Act of 2001".[1] On May 26, 2011, President Barack Obama signed the PATRIOT Sunsets Extension Act of 2011, a four-year extension of three key provisions in the USA PATRIOT Act:[2] roving wiretaps, searches of business records (the "library records provision"), and conducting surveillance of "lone wolves"—individuals suspected of terrorist-related activities not linked to terrorist groups.[3] Details[edit] From broad concern felt among Americans from both the September 11 attacks and the 2001 anthrax attacks, Congress rushed to pass legislation to strengthen security controls. Many provisions of the act were to sunset beginning December 31, 2005, approximately 4 years after its passage. Titles[edit] Related:  Educational Websites

Patient Protection and Affordable Care Act The ACA was enacted with the goals of increasing the quality and affordability of health insurance, lowering the uninsured rate by expanding public and private insurance coverage, and reducing the costs of healthcare for individuals and the government. It introduced a number of mechanisms—including mandates, subsidies, and insurance exchanges—meant to increase coverage and affordability.[6][7] The law also requires insurance companies to cover all applicants within new minimum standards and offer the same rates regardless of pre-existing conditions or sex.[8] Additional reforms aimed to reduce costs and improve healthcare outcomes by shifting the system towards quality over quantity through increased competition, regulation, and incentives to streamline the delivery of healthcare. The Congressional Budget Office projected that the ACA will lower both future deficits[9] and Medicare spending.[10] Overview of provisions Legislative history Background John Chafee Healthcare debate, 2008–10

Fourth Amendment to the United States Constitution Because the Bill of Rights did not initially apply to the states, and federal criminal investigations were less common in the first century of the nation's history, there is little significant case law for the Fourth Amendment before the 20th century. The amendment was held to apply to the states in Mapp v. Ohio (1961). Under the Fourth Amendment, search and seizure (including arrest) should be limited in scope according to specific information supplied to the issuing court, usually by a law enforcement officer who has sworn by it. The exclusionary rule is one way the amendment is enforced. Text[edit] The right of the people to be secure in their persons, houses, papers, and effects, against unreasonable searches and seizures, shall not be violated, and no Warrants shall issue, but upon probable cause, supported by Oath or affirmation, and particularly describing the place to be searched, and the persons or things to be seized.[1] Background[edit] English law[edit] Colonial America[edit]

PATRIOT Act clouds picture for tech - POLITICO.com Print View Cloud computing is a gold mine for the U.S. tech industry, but American firms are encountering resistance from an unexpected enemy overseas: the PATRIOT Act. The Sept. 11-era law was supposed to help the intelligence community gather data on suspected terrorists. But competitors overseas are using it as a way to discourage foreign countries from signing on with U.S. cloud computing providers like Google and Microsoft: Put your data on a U.S.-based cloud, they warn, and you may just put it in the hands of the U.S. government. Continue Reading “The PATRIOT Act has come to be a kind of label for this set of concerns,” Ambassador Philip Verveer, U.S. coordinator for International Communications and Information Policy at the State Department, told POLITICO. While no foreign governments have moved to block U.S. tech companies, authorities in the Netherlands as recently as September floated the idea of banning U.S.

War on Terror The War on Terror, also known as the Global War on Terrorism (GWOT) is a term which has been applied to an international military campaign that started after the 11 September 2001 terrorist attacks on the United States. This resulted in an international military campaign to eliminate al-Qaeda and other militant organizations. The United States and many other NATO and non-NATO nations such as Pakistan participate in the conflict.[1] The phrase 'War on Terror' was first used by U.S. President George W. Etymology[edit] Letter from Barack Obama indicating appropriation of Congressional funds for "Overseas Contingency Operations/Global War on Terrorism" The phrase "War on Terror" has been used to specifically refer to the ongoing military campaign led by the US, UK and their allies against organizations and regimes identified by them as terrorist, and excludes other independent counter-terrorist operations and campaigns such as those by Russia and India. History of the name[edit] The George W.

Medicare (United States) A sample Medicare card. There are separate lines for basic Part A and Part B's supplementary medical coverage, each with its own date. There are no lines for Part C or D, which are additional supplemental policies for which a separate card is issued. In the United States, Medicare is a national social insurance program, administered by the U.S. federal government since 1966, that guarantees access to health insurance for Americans aged 65 and older who have worked and paid into the system, and younger people with disabilities as well as people with end stage renal disease (Medicare.gov, 2012) and persons with amyotrophic lateral sclerosis. In 2010, Medicare provided health insurance to 48 million Americans—40 million people age 65 and older and eight million younger people with disabilities. Medicare has been in operation for over forty years and, during that time, has undergone several changes. Medicare has several sources of financing. or Some beneficiaries are dual-eligible. U.S.

Unmanned aerial vehicle A group photo of aerial demonstrators at the 2005 Naval Unmanned Aerial Vehicle Air Demo. An unmanned aerial vehicle (UAV), commonly known as drone, is an aircraft without a human pilot aboard. Its flight is controlled either autonomously by onboard computers or by the remote control of a pilot on the ground or in another vehicle. They are usually deployed for military and special operation applications, but also used in a small but growing number of civil applications, such as policing and firefighting, and nonmilitary security work, such as surveillance of pipelines. History[edit] The birth of U.S. There are two prominent UAV programs within the United States: that of the military and that of the Central Intelligence Agency (CIA). The Israeli Tadiran Mastiff, which first flew in 1973, is seen as the first modern battlefield UAV, due to its data-link system, endurance-loitering, and live video streaming.[13] FAA designation [edit] In the United States, shortly after,[when?] U.S.