Wave of cybersecurity breaches is no surprise to expert exposing online crime. Brian Krebs does not use heroin, but sometimes people send it to him anyway. 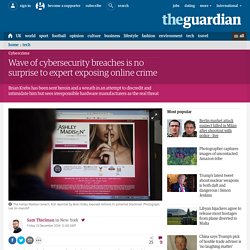 The 43-year-old Alabama native writes Krebs on Security, a one-man operation focused on digital crime. His encyclopedic knowledge of the subject and his network of contacts has made his blog essential reading for anyone interested in cybercrime and a coveted lecturer at some of the biggest companies in the world. It has also made him some dangerous enemies – hence the heroin, meant as a sinister, silencing message. Looking back on a year in which Russian cyber-spies have been accused of meddling in the US election, Yahoo announced that 1bn email accounts were compromised and hackers used internet-connected devices including baby monitors, webcams and thermostats, to take down some of the world’s biggest websites, what surprise Krebs the most is that people are surprised at all. The problem is cybercrime is easy, Krebs says. The Data Breach Landscape in 2017. Experian Data Breach Resolution released its fourth annual Data Breach Industry Forecast white paper to highlight the risk landscape in 2017. 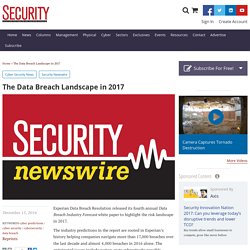 The industry predictions in the report are rooted in Experian’s history helping companies navigate more than 17,000 breaches over the last decade and almost 4,000 breaches in 2016 alone. The anticipated issues include nation-state cyberattacks possibly moving from espionage to full-scale cyber conflicts and new attacks targeting the healthcare industry. TalkTalk's wi-fi hack advice is 'astonishing' Image copyright Getty Images TalkTalk's handling of a wi-fi password breach is being criticised by several cyber-security experts. 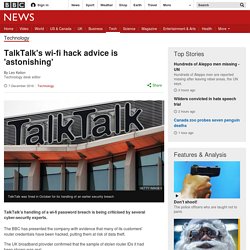 Latest Technology Security News. Axiom Cyber Intelligence are leaders in Cyber Security and they have put together a short film in the hope of reducing confusion and increasing awareness. 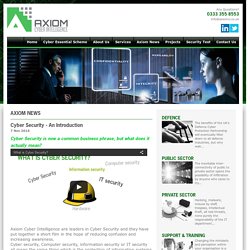 Cyber security, Computer security, information security or IT security all mean the same thing which is the protection of information systems from theft or damage to the hardware, the software, and to the information on them. recent events. ThyssenKrupp hit by hackers and trade secrets stolen in massive data breach. ThyssenKrupp, one of the largest global steel manufacturers, has confirmed that it was hit by hackers and that sensitive trade secrets have been stolen as part of a "massive" cyberattack. 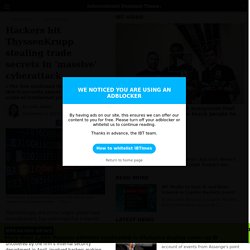 The data breach, which was uncovered by the firm's internal security department in April, involved hackers making away with project data from ThyssenKrupp's plant engineering division and possibly other areas, according to reports. BlackBerry unveils new platform for cyber security threats. BlackBerry Ltd. has unveiled a device management software platform it calls a safeguard against cyber security threats in a mobile and hyper-connected corporate environment. 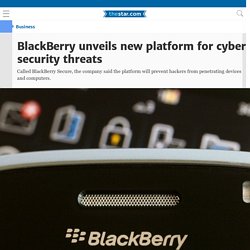 “Businesses must be able to confidentially and reliably transmit sensitive data between end points to keep people, information and goods safe,” BlackBerry CEO John Chen said in a statement. “BlackBerry is uniquely qualified to address this emerging market now because of our deep experience, industry leadership and ongoing product innovation that addresses future business needs.” Called BlackBerry Secure, the platform builds on BlackBerry’s enterprise management software suites with enhancements, more integration and added scalability to help business and government clients manage and secure mobile and other devices. IBM to use AI to help banks with cybersecurity. BI Intelligence DisclaimerMore US4592001014 on Markets Insider » This story was delivered to BI Intelligence "Fintech Briefing" subscribers. 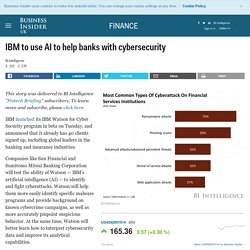 To learn more and subscribe, please click here. IBM launched its IBM Watson for Cyber Security program in beta on Tuesday, and announced that it already has 40 clients signed up, including global leaders in the banking and insurance industries. Companies like Sun Financial and Sumitomo Mitsui Banking Corporation will test the ability of Watson — IBM's artificial intelligence (AI) — to identify and fight cyberattacks. One problem the program aims to solve is a lack of accessible information on past cyberattacks. Cybersecurity is a persistent and growing problem for financial services institutions, in particular. Forbes Welcome. Massive Malvertising Campaign Hits MSN, Yahoo. Anti-Malware , Technology Analyst: 'One of the Most Advanced Malvertising Attacks that I've Ever Witnessed' Jeremy Kirk (jeremy_kirk) • December 8, 2016 0 Comments A massive malicious advertising campaign has resurfaced on major publishing websites, including Yahoo and MSN, just a few months after researchers thought they'd nipped it in the bud. 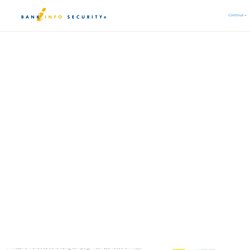 Forbes Welcome. The Department of Defense Is about to Enhance Its Deep Web Search Engine. Hacker Holiday Havoc. It’s that time of year again...when consumers, retailers and manufacturers need to understand and be alert to the latest cyber attacks that threaten to dampen the spirit and excitement of the holidays. 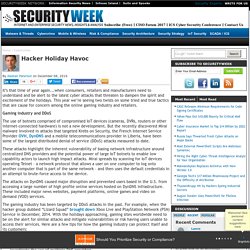 This year we’re seeing two twists on some tried and true tactics that are cause for concern among the online gaming industry and retailers. Gaming industry and DDoS The use of botnets comprised of compromised IoT devices (cameras, DVRs, routers or other internet-connected hardware) is not a new development. But the recently discovered Mirai malware involved in attacks that targeted Krebs on Security, the French Internet Service Provider OVH, DynDNS and a mobile telecommunications provider in Liberia, have been some of the largest distributed denial of service (DDoS) attacks measured to date. Carbanak Gang: Global hospitality industry hit by hackers with highly sophisticated stealth malware. The infamous Carbanak Gang has resurfaced with renewed vigour. 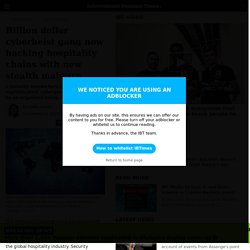 The cybergang, which first made headlines after pulling off a billion dollar cyberheist in 2015, is now going after the global hospitality industry. Security researchers have uncovered a new active and ongoing campaign, which is aimed at harvesting credit card and other personal and sensitive data of customers of the hospitality industry across the globe. Security firm TrustWave's global director of incident response, Brian Hussey told IBTimes UK that the Carbanak Gang is using a new, customised variant of its original malware to conduct cyberattacks. Although Hussey refrained from mentioning the names of the organisations already affected by the ongoing campaign, he confirmed that the attacks have grown in proportion since they were first detected in October.

“They are ours, even after reboot. They will not accept any new firmware from [Internet Service Provider] or anyone, and connect back to us every time :),” BestBuy told the publication in an online chat. The hacker also shared a URL which appeared to show the live stats of the Access Control Server (ACS) used to push out the malicious updates. TalkTalk and Post Office routers hit by cyber-attack.

Image copyright TalkTalk Thousands of TalkTalk and Post Office customers have had their internet access cut by an attack targeting certain types of internet routers. A spokeswoman for the Post Office told the BBC that the problem began on Sunday and had affected about 100,000 of its customers. Talk Talk also confirmed that some of its customers had been affected, and it was working on a fix. It is not yet known who is responsible for the attack.

Earlier in the week, Germany's Deutsche Telekom revealed that up to 900,000 of its customers had lost their internet connection as a result of the attack. Image copyright Getty Images It involves the use of a modified form of the Mirai worm - a type of malware that is spread via hijacked computers, which causes damage to equipment powered by Linux-based operating systems. Over 1 Million Google Accounts Hacked by 'Gooligan' Android Malware. If you own an Android smartphone, Beware! A new Android malware that has already breached more than 1 Million Google accounts is infecting around 13,000 devices every day. Dubbed Gooligan, the malware roots vulnerable Android devices to steal email addresses and authentication tokens stored on them. With this information in hands, the attackers are able to hijack your Google account and access your sensitive information from Google apps including Gmail, Google Photos, Google Docs, Google Play, Google Drive, and G Suite.

Researchers found traces of Gooligan code in dozens of legitimate-looking Android apps on 3rd-party app stores, which if downloaded and installed by an Android user, malware starts sending your device’s information and stolen data to its Command and Control (C&C) server. Now Appearing: Year-Long Hack at Madison Square Garden. As NYC readies for the big Thanksgiving Day parade, a breach affecting some of the city’s most famous venues, including Madison Square Garden and Radio City Music Hall, has been disclosed. Madison Square Garden Co. said that a hack of the payment processing system, which also affects the Beacon Theater, Chicago Theater and the Theatre at Madison Square Garden, lasted approximately a year, from November 9, 2015 and October 24, 2016.

Hackers gained access to data contained in the magnetic stripe on the back of payment cards swiped in person to purchase merchandise and food and beverage items at Madison Square Garden, the Theater at Madison Square Garden, Radio City Music Hall, Beacon Theater, and Chicago Theater, including credit card numbers, cardholder names, expiration dates and internal verification codes. FBI forced to clarify 'thousands' of National Security Letters after Internet Archive disclosure. For well over a decade, the FBI has issued secretive compel notices on communications providers to request data about users suspected of criminal activity.

Dubbed National Security Letters (NSLs), they come with an everlasting gag order and do not need to be approved by a judge. Yet now, after spreading inaccurate legal advice for roughly a year, the US law enforcement agency is reportedly being forced to re-issue thousands of these letters because it failed to inform firms served with an order the law around challenging them had changed. The news came to light following a landmark appeal by the Internet Archive, which was on the receiving end of an NSL back in August. Upon analysis, the website found the notice contained significant misinformation about how to contest the order. As explained by the Electronic Freedom Foundation (EFF) in a blog post, the NSL failed to explain changes to the law that discarded old rules saying firms could only make one challenge a year. What Trump Can Do About Cybersecurity - Bloomberg View. China: Tech Giants Push Back Against Beijing's New Cyber Security Bill. Trump adds congressional cybersecurity leadership to transition team.