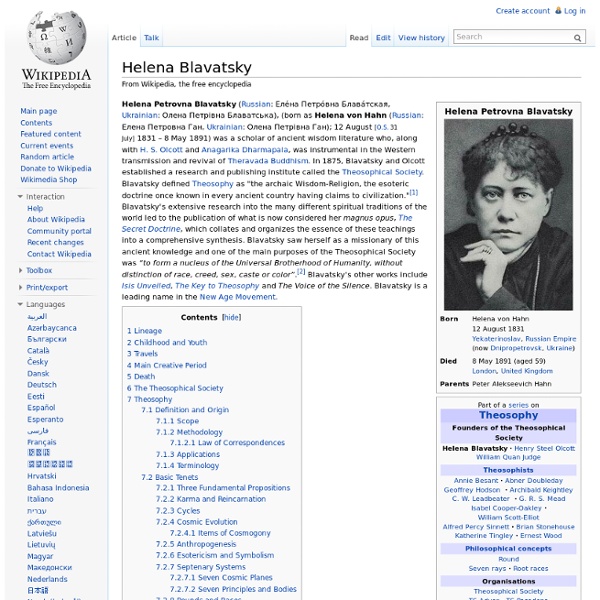 Helena Petrovna Blavatsky (Russian: Еле́на Петро́вна Блава́тская, Ukrainian: Олена Петрівна Блаватська), born as Helena von Hahn (Russian: Елена Петровна Ган, Ukrainian: Олена Петрівна Ган; 12 August [O.S. 31 July] 1831 – 8 May 1891), was a Russian occultist.[1] In 1875, Blavatsky, Henry Steel Olcott, and William Quan Judge established a research and publishing institute called the Theosophical Society. Blavatsky defined Theosophy as "the archaic Wisdom-Religion, the esoteric doctrine once known in every ancient country having claims to civilization."[2] One of the main purposes of the Theosophical Society was "to form a nucleus of the Universal Brotherhood of Humanity, without distinction of race, creed, sex, caste or color".[3] Blavatsky saw herself as a missionary of this ancient knowledge. The Theosophical Society had a major influence on Buddhist modernism and Hindu reform movements, and the spread of those modernised versions in the west. Biography[edit] Genealogy[edit] H.P.

Battle of Thermopylae The Battle of Thermopylae (/θərˈmɒpɨliː/ thər-MOP-i-lee; Greek: Μάχη τῶν Θερμοπυλῶν, Machē tōn Thermopylōn) was fought between an alliance of Greek city-states, led by King Leonidas of Sparta, and the Persian Empire of Xerxes I over the course of three days, during the second Persian invasion of Greece. It took place simultaneously with the naval battle at Artemisium, in August or September 480 BC, at the narrow coastal pass of Thermopylae ('The Hot Gates'). The Persian invasion was a delayed response to the defeat of the first Persian invasion of Greece, which had been ended by the Athenian victory at the Battle of Marathon in 490 BC. A Greek force of approximately 7,000 men marched north to block the pass in the summer of 480 BC. After this engagement the Greek navy, under the command of the Athenian politician Themistocles, at Artemisium received news of the defeat at Thermopylae. Sources[edit] The primary source for the Greco-Persian Wars is the Greek historian Herodotus. Notes:

Ram Dass Youth and education[edit] Richard Alpert was born to a Jewish family in Newton, Massachusetts. His father, George Alpert, was a lawyer in Boston. Alpert attended the Williston Northampton School, graduating in 1948 as a part of the Cum Laude Association.[6] He then went on to receive a Bachelor of Arts degree from Tufts University, a master's degree from Wesleyan University, and a doctorate (all in psychology) from Stanford University.[5] His father had wanted him to go to medical school, but while at Tufts he decided he wanted to study psychology instead.[5] Alpert's mentor at Wesleyan, David McClelland, then recommended Alpert to Stanford, where he began his PhD studies in the early 1950s.[5] Alpert wrote his doctoral thesis on "achievement anxiety Harvard professorship and research[edit] Millbrook and psychedelic counterculture (1963–1967)[edit] In 1967 Alpert gave talks at the League for Spiritual Discovery's center in Greenwich Village.[19] Spiritual search and name change[edit]

Marilyn Ferguson Marilyn Ferguson, circa 1980. Marilyn Ferguson (April 5, 1938 in Grand Junction, Colorado – October 19, 2008) was an American author, editor and public speaker, best known for her 1980 book The Aquarian Conspiracy and its affiliation with the New Age Movement in popular culture. A founding member of the Association of Humanistic Psychology,[citation needed] Ferguson published and edited the well-regarded science newsletter Brain/Mind Bulletin from 1975 to 1996. She eventually earned numerous honorary degrees, served on the board of directors of the Institute of Noetic Sciences, and befriended such diverse figures of influence as inventor and theorist Buckminster Fuller, spiritual author Ram Dass, Nobel Prize-winning chemist Ilya Prigogine and billionaire Ted Turner. Ferguson's work also influenced Vice President Al Gore, who participated in her informal network while a senator and later met with her in the White House. Youth and early writing career[edit] The Aquarian Conspiracy[edit]

Fenwicke Holmes Fenwicke Lindsay Holmes (1883-1973) was an American author, former Congregational minister, and Religious Science leader. The brother of Ernest Holmes, Fenwicke is widely recognized for being an important factor in the establishment of Religious Science and the founding of the United Centers for Spiritual Living. Fenwicke is recognized as an important figure in the development of the New Thought movement in Japan in particular Seicho-no-ie. Throughout his career Holmes served as a Congregational Church minister and as the pastor of a Divine Science Church. He and his brother Ernest created Uplift Magazine, which he served as the editor, and later, he was the president of the Inter­national College of Mental Science. Holmes wrote more than twenty books, lectured for fifty years around the world, and frequently spoke on radio and television. Biography[edit] Born on a farm near Lincoln, Maine in 1883, Fenwicke was one of nine boys. Career[edit] In the 1950s, Holmes collaborated with Dr.

Ramana Maharshi Ramana Maharshi /ˈrʌmənə məˈhɑrʃi/ (1879–1950) is widely acknowledged as one of the outstanding Indian gurus of modern times. He was born as Venkataraman Iyer, in Tiruchuli, Tamil Nadu [note 1] Tamil Nadu (South India). His first years were spent in solitude, but his stillness and his appearance as a sanyassin soon attracted devotees. In later years, he responded to questions, but always insisted that silence was the purest teaching. Venkataraman was renamed Bhagavan Sri Ramana Maharshi by one of his earliest followers, Ganapati Muni. Biography[edit] Early years (1879–1896)[edit] Temple of Tiruchuli, Tamil Nadu Family background[edit] Ramana was born on 30 December 1879[note 6] in a village called Tiruchuli (Tiruchuzhi) near Aruppukkottai, Madurai in Tamil Nadu, South India on Arudra Darshanam day, the day of the `Sight of Siva'. He was born into an orthodox Hindu Brahmin (Iyer) family, the second of four children of Sundaram Iyer (1848–1890), from the lineage of Parashara, and Azhagammal (?

Samarth Ramdas Ramdas was a noted 17th century saint and spiritual poet of Maharashtra. He is most remembered for his Advaita Vedanta (Non-dualism) text Dasbodh.[1] Samarth Ramdas was a devotee of Lord Hanuman and Lord Rama. Early life and background[edit] The birth name of Samartha Ramdas Swami was Narayan Suryaji Thosar. During childhood Narayan was fond of all games that involved vigorous physical activity. Residences[edit] Ramdas moved around quite a lot, and in the process, used several Ghal (Marathi: घळ), which are small caves used for meditation. Ramghal, on SajjangadMorghal, at Morbag village near SajjangadTondoshi Ghal, North of ChaphalTaakli, near NashikChandragiri, opposite Vasantgad, near KaradHelwak, near Helwak villageShiganwadi, near ChandragiriShivthar Ghal, near Mahad[3] Spiritual Development[edit] Hanuman At the age of 11, he attained enlightenment. To satisfy his mother’s wishes, Narayan agreed to marry. He followed this routine continuously for a period of 12 years. Writings[edit]

Wei Wu Wei Terence James Stannus Gray (14 September 1895 – 5 January 1986), better known by the pen name Wei Wu Wei, was a 20th-century Taoist philosopher and writer. Background[edit] Between the years 1958 and 1974 eight books and articles in various periodicals appeared under the pseudonym "Wei Wu Wei" (Wu wei, a Taoist term which translates as "action that is non-action"). The identity of the author was not revealed at the time of publication for reasons outlined in the Preface to the first book, Fingers Pointing Towards the Moon (Routledge and Kegan Paul, 1958). Eventually it was revealed that the author had been Terence Gray. Terence James Stannus Gray was born in Felixstowe, Suffolk, England on 14 September 1895, the son of Harold Stannus Gray and a member of a well-established Irish family. Wei Wu Wei's influence, while never widespread, has been profound upon many of those who knew him personally, upon those with whom he corresponded, among them British mathematician and author G.

Periya Puranam The Periya Puranam (Tamil:பெரிய‌ புராண‌ம்), that is, the great purana or epic, sometimes called Tiruttontarpuranam ("Tiru-Thondar-Puranam", the Purana of the Holy Devotees) is a Tamil poetic account depicting the legendary lives of the sixty-three Nayanars, the canonical poets of Tamil Shaivism. It was compiled during the 12th century by Sekkizhar. It provides evidence of trade with West Asia[1] The Periya Puranam is part of the corpus of Shaiva canonical works. Sekkizhar compiled and wrote the Periya Puranam or the Great Purana, (the life stories of the sixty-three Shaiva Nayanars, poets of the God Shiva) who composed the liturgical poems of the Tirumurai, and was later himself canonised and the work became part of the sacred canon.[2] Among all the hagiographic Puranas in Tamil, Sekkizhar's Tiruttondar Puranam or Periyapuranam, composed during the rule of Kullottonga Chola II (1133-1150) stands first.[3] Background[edit] Periyapuranam[edit] Significance[edit] See also[edit]