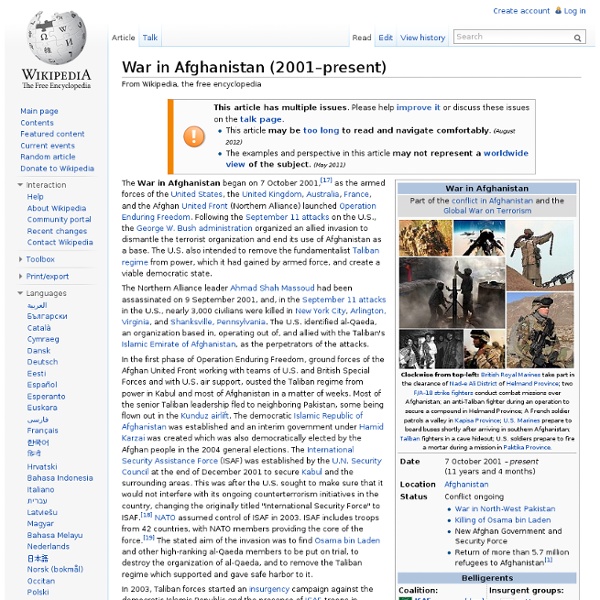 U.S. President George W. Bush demanded that the Taliban hand over Osama bin Laden and expel al-Qaeda. The Taliban requested that bin Laden leave the country, but declined to extradite him without evidence of his involvement in the 9/11 attacks. In 2003, NATO assumed leadership of ISAF, with troops from 43 countries. Though vastly outgunned and outnumbered, the Taliban insurgents, most notably the Haqqani Network and Hezb-e-Islami Gulbuddin, have waged asymmetric warfare with guerilla raids and ambushes in the countryside, suicide attacks against urban targets and turncoat killings against coalition forces. While ISAF continued to battle the Taliban insurgency, fighting crossed into neighboring North-West Pakistan.[31] In 2004, the Pakistani Army began to clash with local tribes hosting al-Qaeda and Taliban militants. Historical background Origins of Afghanistan's civil war Warlord rule (1992–1996) Taliban fighters Taliban Emirate vs Northern Alliance The conflict was brutal. Al-Qaeda

Al Qaeda vs. the United States: Bad News, Worse News Declaring that "the buck stops with me," President Obama announced a set of new directives in response to the foiled bombing of Northwest Flight 253 by the now-infamous "underpants bomber." The list of presidential orders is mostly unexceptionable, and may even make a repeat performance less likely. Of course, if al Qaeda is even remotely strategic, trying an exact repeat of this attempt would be silly. Instead, they'll study the new procedures, look for holes in them, and try some new variation. The good news is that air travel will still be incredibly safe, and no sensible person should alter their normal travel plans because they are worried about the "terrorist threat." What's missing from Obama's list of new initiatives is any sense that U.S. foreign policy might need some rethinking too. One more thing. Al-Balawi 'started to change,' says his wife, after the American-led invasion of Iraq in 2003. By itself, that mere fact does not mean that U.S. foreign policy is wrong.

Timeline of United States military operations This is a timeline of United States government military operations. The list through 1975 is based on Committee on International Relations (now known as the Committee on Foreign Affairs). Dates show the years in which U.S. government military units participated. The bolded items are the U.S. government wars most often considered to be major conflicts by historians and the general public. Note that instances where the U.S. government gave aid alone, with no military personnel involvement, are excluded, as are Central Intelligence Agency operations. Extraterritorial and major domestic deployments[edit] Portions of this list are from the Congressional Research Service report RL30172.[1] 1775–1799[edit] 1775–83 – American Revolutionary War: an armed struggle for secession from the British Empire by the Thirteen Colonies that would subsequently become the United States. 1785–95 – Northwest Indian War: a series of battles with various native tribes in present-day Ohio. 1800–1809[edit]

Iraq War Prior to the war, the governments of the United States and the United Kingdom claimed that Iraq's alleged possession of weapons of mass destruction (WMD) posed a threat to their security and that of their coalition/regional allies.[49][50][51] In 2002, the United Nations Security Council passed Resolution 1441 which called for Iraq to completely cooperate with UN weapon inspectors to verify that Iraq was not in possession of WMD and cruise missiles. Prior to the attack, the United Nations Monitoring, Verification and Inspection Commission (UNMOVIC) found no evidence of WMD, but could not yet verify the accuracy of Iraq's declarations regarding what weapons it possessed, as their work was still unfinished. The leader of the inspectors, Hans Blix, estimated the time remaining for disarmament being verified through inspections to be "months". Background[edit] Iraq disarmament and pre-war intelligence[edit] UN weapons inspections resume[edit] Weapons of mass destruction[edit] Poison gas[edit]

9/11: Why Did Al Qaeda Attack the United States? « Rich McSheehy's Weblog I would guess that most of us can recall exactly where we were and what we were doing when we first heard about the horrific attacks on the Twin Towers and the subsequent attack on the Pentagon. There aren’t many moments in your life, no matter how long you live, that you will recall as vividly as the moment you learned about it. The assassination of John F. Kennedy was also like that for me. I don’t think anyone really feels that they have heard a satisfactory explanation of why Lee Harvey Oswald killed him. That was over forty years ago, and there are still many people who don’t believe the results of the official U.S. government investigation. The U.S. government’s 9/11 Commission Report has also failed to gain unanimous support. The World Trade Center could be described as the financial capital of the multinational businesses of the United States. Toward the end of World War II the Nazis in Germany also planned to develop a suicide bomber squadron called the Leonidas Squadron.

2003 invasion of Iraq Four countries participated with troops during the initial invasion phase, which lasted from 19 March to 9 April 2003. These were the United States (148,000), United Kingdom (45,000), Australia (2,000), and Poland (194). 36 other countries were involved in its aftermath. In preparation for the invasion, 100,000 U.S. troops were assembled in Kuwait by 18 February.[20] The coalition forces also received support from Kurdish irregulars in Iraqi Kurdistan. According to U.S. President George W. Bush and British Prime Minister Tony Blair, the coalition mission was "to disarm Iraq of weapons of mass destruction, to end Saddam Hussein's support for terrorism, and to free the Iraqi people The invasion was preceded by an air strike on the Presidential Palace in Baghdad on 19 March 2003. The main body of coalition forces continued their drive into the heart of Iraq and met with little resistance. Prelude to the invasion[edit] A UN weapons inspector in Iraq, 2002. Preparations for war[edit]

rporal Doug Grant: NZ Soldier Killed In Afghanistan Last updated 19:24 22/08/2011 The Chief of the New Zealand Defence Force today revealed the identity and the circumstances surrounding the death of SAS soldier Corporal Doug Grant. Another New Zealand SAS soldier is reportedly on the way to Afghanistan to replace Corporal Doug Grant. Grant was killed in the country's capital, Kabul, helping save the lives of three British civilians and two Gurkha security guards. The 41-year-old SAS soldier from Linton known as "Dougie" died on Friday in a helicopter on the way to a military hospital after an attack by the Taleban at the British Council diplomatic offices. He leaves behind his wife Tina, their seven-year-old daughter and their five-year-old son. TVNZ reported that another SAS soldier had been sent to take Grant's place. The Defence Force today described the events leading up to his death. "Therefore most of the city, counter-terrorists as well as police and wider military were on standby for some action to occur. - © Fairfax NZ News Comments

Korean War The Korean War (25 June 1950 – 27 July 1953)[29][a][31] was a war between the Republic of Korea (South Korea), supported by the United Nations, and the Democratic People's Republic of Korea (North Korea), at one time supported by China and the Soviet Union. It was primarily the result of the political division of Korea by an agreement of the victorious Allies at the conclusion of the Pacific War at the end of World War II. The Korean Peninsula was ruled by the Empire of Japan from 1910 until the end of World War II. Following the surrender of the Empire of Japan in September 1945, American administrators divided the peninsula along the 38th parallel, with U.S. military forces occupying the southern half and Soviet military forces occupying the northern half.[32] The failure to hold free elections throughout the Korean Peninsula in 1948 deepened the division between the two sides; the North established a communist government, while the South established a right-wing government. Names