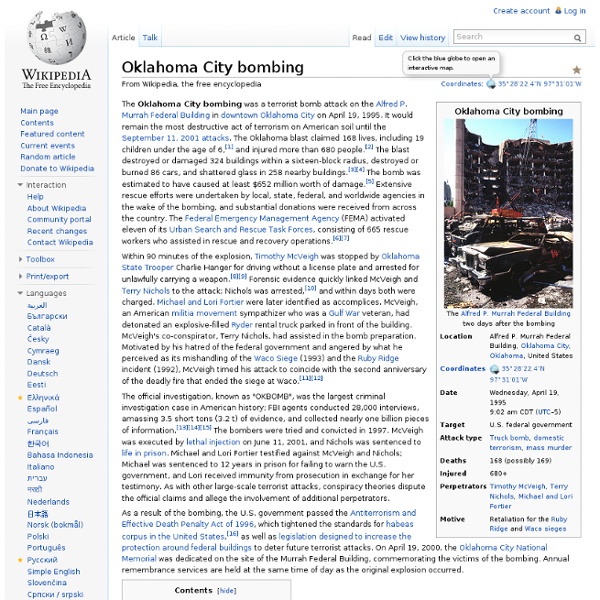 The Oklahoma City bombing was a domestic terrorist bomb attack on the Alfred P. Murrah Federal Building in downtown Oklahoma City on April 19, 1995. It remained the most destructive act of terrorism committed in the United States until the September 11 attacks of 2001. The bombing killed 168 people[1] and injured more than 680 others.[2] The blast destroyed or damaged 324 buildings within a 16-block radius, destroyed or burned 86 cars, and shattered glass in 258 nearby buildings,[3][4] causing at least an estimated $652 million worth of damage.[5] Extensive rescue efforts were undertaken by local, state, federal, and worldwide agencies in the wake of the bombing, and substantial donations were received from across the country. The Federal Emergency Management Agency (FEMA) activated eleven of its Urban Search and Rescue Task Forces, consisting of 665 rescue workers who assisted in rescue and recovery operations.[6][7] Planning[edit] Motivation[edit] Target selection[edit] Alfred P.

Noble lie Plato's Republic[edit] Plato presented the Noble Lie (γενναῖον ψεῦδος, gennaion pseudos) in a fictional tale, wherein Socrates provides the origin of the three social classes who compose the republic proposed by Plato; Socrates speaks of a socially stratified society, wherein the populace are told "a sort of Phoenician tale": . . . the earth, as being their mother, delivered them, and now, as if their land were their mother and their nurse, they ought to take thought for her and defend her against any attack, and regard the other citizens as their brothers and children of the self-same earth. . . While all of you, in the city, are brothers, we will say in our tale, yet god, in fashioning those of you who are fitted to hold rule, mingled gold in their generation, for which reason they are the most precious — but in the helpers, silver, and iron and brass in the farmers and other craftsmen. Socrates proposes and claims that if the people believed "this myth . . . Karl Popper[edit]

Oklahoma City bombing conspiracy theories A variety of conspiracy theories have been proposed regarding the Oklahoma City bombing. These theories reject all or part of the official government report. Some of these theories focus on the possibility of additional, unindicted co-conspirators or additional explosives planted inside the Murrah Federal building. Other theories allege that government employees and officials, including US President Bill Clinton, knew of the impending bombing and intentionally failed to act on that knowledge. Government investigations have been opened at various times to look into the theories. Oklahoma City Bombing[edit] At 9:02 a.m. Although the indictment against McVeigh and Nichols alleged that they conspired with "others unknown to the grand jury", prosecutors, and later McVeigh himself, said the bombing was solely the work of McVeigh and Nichols. Additional conspirators[edit] Additional explosives[edit] US federal government involvement[edit] Investigations[edit] See also[edit] References[edit]

A Noble Lie: Oklahoma City 1995 (2011 NKVD prisoner massacres Process[edit] With the invasion of Russia by German forces, the NKVD was responsible for evacuating prisons in the occupied regions. More than 140,000 prisoners were successfully evacuated by the NKVD. More than 9,800 were reportedly executed in the prisons, 1,443 were executed in the process of evacuation, 59 were killed for attempting to escape, 23 were killed by German bombs, and 1057 died from other causes.[6] The massacres[edit] The NKVD and the Red Army killed prisoners in many places from Poland (e.g. Entrance to memorial in Piatykhatky Katyn-Kharkiv memorial Belarus[edit] Hrodna (Grodno): on June 22, the NKVD executed several dozen people at the local prison. Estonia[edit] Tartu: on July 9, 1941, almost 250 detainees were shot in Tartu prison and the Gray House courtyard; their bodies were dumped in makeshift graves and in the prison well.[17]Kautla massacre: on July 24, 1941 the Red Army killed more than 20 civilians and burnt their farms. Latvia[edit] Lithuania[edit] Poland[edit]

Iraq War Prior to the war, the governments of the United States and the United Kingdom claimed that Iraq's alleged possession of weapons of mass destruction (WMD) posed a threat to their security and that of their coalition/regional allies.[49][50][51] In 2002, the United Nations Security Council passed Resolution 1441 which called for Iraq to completely cooperate with UN weapon inspectors to verify that Iraq was not in possession of WMD and cruise missiles. Prior to the attack, the United Nations Monitoring, Verification and Inspection Commission (UNMOVIC) found no evidence of WMD, but could not yet verify the accuracy of Iraq's declarations regarding what weapons it possessed, as their work was still unfinished. The leader of the inspectors, Hans Blix, estimated the time remaining for disarmament being verified through inspections to be "months".[nb 2][52][53][54][55] Background[edit] Iraq disarmament and pre-war intelligence[edit] UN weapons inspections resume[edit] Yellowcake uranium[edit]

Oklahoma City Bombing Families Believe FBI Knew; Evans-Pritchard. In his new book The Secret Life of Bill Clinton: The Unreported Stories, just published by Regnery, renowned investigative reported Ambrose Evans-Pritchard alleges massive corruption and cover-ups in the Clinton Administration in connection with many incidents, including the death of Vincent Foster, drug dealing in Arkansas, and the Paula Jones case. He also raises, as the Terry Nichols trial begins, some very serious questions about the tragic 1995 bombing of the federal building in Oklahoma City. There is no doubt that Timothy McVeigh was guilty, says Evans-Pritchard, but he believes that nothing like the full story has ever come out. Why? He discloses what he calls "the smoking gun of the Oklahoma bombing," a memo written only two days after the bombing. The searing destruction of the Alfred P. Clinton seized the moment. He did not name the Republicans as co-conspirators; he did not have to. The Republicans were dumbstruck. Valuable Witnesses Never Called to Trial It did not happen.

Atomic bombings of Hiroshima and Nagasaki In August 1945, during the final stage of the Second World War, the United States dropped atomic bombs on the Japanese cities of Hiroshima and Nagasaki. The two bombings, which killed at least 129,000 people, remain the only use of nuclear weapons for warfare in human history. Background Pacific War Main article: Pacific War As the Allied advance moved inexorably towards Japan, conditions became steadily worse for the Japanese people. Preparations to invade Japan Even before the surrender of Nazi Germany on May 8, 1945, plans were underway for the largest operation of the Pacific War, Operation Downfall, the invasion of Japan. U.S. Japan's geography made this invasion plan obvious to the Japanese; they were able to predict the Allied invasion plans accurately and thus adjust their defensive plan, Operation Ketsugō, accordingly. The Americans were alarmed by the Japanese buildup, which was accurately tracked through Ultra intelligence. Air raids on Japan A B-29 over Osaka on June 1, 1945

The bombing attack on the Alfred P. Murrah Federal Building in downtown Oklahoma city was a terrorist attack that claimed 168 lives and injured 680 more people. This tragic event can be linked to Mrs. Dwyer in Sweet Grass Basket because in the bombing, one person managed to change the life of so many others in a negative way. Mrs. Dwyer changes the life of all the students attending the school by punishing them, yelling at them and beating them in some cases. This scars the kids and forever changes their lives just like the suicide bomber did hundreds. by mateidima Oct 30