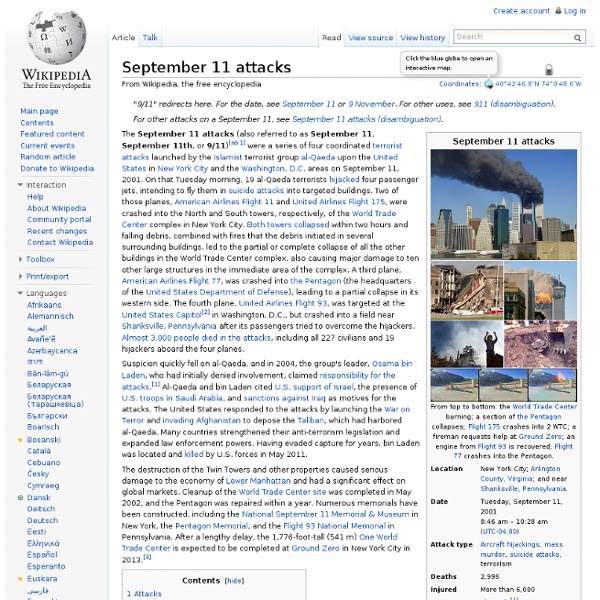 The September 11 attacks (also referred to as September 11, September 11th, or 9/11)[nb 1] were a series of four coordinated terrorist attacks launched by the Islamic terrorist group al-Qaeda upon the United States in New York City and the Washington, D.C. metropolitan area on Tuesday, September 11, 2001. Four passenger airliners were hijacked by 19 al-Qaeda terrorists so they could be flown into buildings in suicide attacks. Two of those planes, American Airlines Flight 11 and United Airlines Flight 175, were crashed into the North and South towers, respectively, of the World Trade Center complex in New York City. Within two hours, both towers collapsed with debris and the resulting fires causing partial or complete collapse of all other buildings in the WTC complex, as well as significant damage to ten other large surrounding structures. Background Attackers al-Qaeda The origins of al-Qaeda can be traced to 1979 when the Soviet Union invaded Afghanistan. Osama bin Laden Motives Attacks

Top 10 U.S. Government Changes Since 9/11 Ten years have passed since the United States was attacked by Al-Qaeda terrorists on September 11, 2001. The event was a defining moment in U.S. history. After it was discovered that the attacks were orchestrated by Al-Qaeda, the information sparked intense debate in the political world. Former President George W. Bush decided to pass a large amount of U.S. legislation to strengthen U.S. Operation Gladio B Operation Gladio B was an FBI codename adopted in 1997 for relations between US intelligence, the Pentagon, and Al Qaeda. The name refers to the original Operation Gladio, in which US intelligence had relations with anti-communist groups in Europe. According to Sibel Edmonds, Gladio B identified, among other things, meetings between US intelligence and Ayman al-Zawahiri in Azerbaijan between 1997 and 2001, with al-Zawahiri and other mujahideen being transported by NATO aircraft to Central Asia and the Balkans. These and related allegations were seemingly confirmed by Sunday Times journalists in 2008 by speaking to Pentagon and MI6 sources; however the journalists were prevented from publishing these allegations when the second half of their 4-part series was dropped.[1][2] References[edit] See also[edit]

Oklahoma City bombing The Oklahoma City bombing was a domestic terrorist bomb attack on the Alfred P. Murrah Federal Building in downtown Oklahoma City on April 19, 1995. It remained the most destructive act of terrorism committed in the United States until the September 11 attacks of 2001. The bombing killed 168 people[1] and injured more than 680 others.[2] The blast destroyed or damaged 324 buildings within a 16-block radius, destroyed or burned 86 cars, and shattered glass in 258 nearby buildings,[3][4] causing at least an estimated $652 million worth of damage.[5] Extensive rescue efforts were undertaken by local, state, federal, and worldwide agencies in the wake of the bombing, and substantial donations were received from across the country. The Federal Emergency Management Agency (FEMA) activated eleven of its Urban Search and Rescue Task Forces, consisting of 665 rescue workers who assisted in rescue and recovery operations.[6][7] Planning[edit]

Photographer behind 9/11 "Falling Man" retraces steps, recalls "unknown soldier" Richard Drew.Richard Drew put down his camera bag and looked up at the colossal skyscraper that seemed to be racing toward the clouds at an accelerated clip. "I'm really surprised how fast this building's gone up," he said of the rising edifice at 1 World Trade Center, peering at the monolith from beneath the brim of a tan baseball cap. "I just hope it isn't another target."

Operation Paperclip Operation Paperclip was the Office of Strategic Services (OSS) program used to recruit the scientists of Nazi Germany for employment by the United States in the aftermath of World War II. It was conducted by the Joint Intelligence Objectives Agency (JIOA), and in the context of the burgeoning Cold War. One purpose of Operation Paperclip was to deny German scientific expertise and knowledge to the Soviet Union[1] and the United Kingdom,[2] as well as inhibiting post-war Germany from redeveloping its military research capabilities. Although the JIOA's recruitment of German scientists began after the Allied victory in Europe on May 8, 1945, U.S.

Oklahoma City bombing conspiracy theories A variety of conspiracy theories have been proposed regarding the Oklahoma City bombing. These theories reject all or part of the official government report. Some of these theories focus on the possibility of additional, unindicted co-conspirators or additional explosives planted inside the Murrah Federal building. Other theories allege that government employees and officials, including US President Bill Clinton, knew of the impending bombing and intentionally failed to act on that knowledge. Government investigations have been opened at various times to look into the theories. Oklahoma City Bombing[edit]

The Falling Man - Tom Junod - 9/11 Suicide Photograph Follow Tom Junod on Twitter Originally appeared in the September 2003 issue In the picture, he departs from this earth like an arrow. Operation Gladio Emblem of "Gladio", Italian branch of the NATO "stay-behind" paramilitary organizations. The motto, "Silendo Libertatem Servo", means "In being silent, I save freedom". Operation Gladio (Italian: Operazione Gladio) is the codename for a clandestine North Atlantic Treaty Organisation (NATO) "stay-behind" operation in Italy during the Cold War. Its purpose was to continue armed resistance in the event of a Warsaw Pact invasion and conquest. Although Gladio specifically refers to the Italian branch of the NATO stay-behind organizations, "Operation Gladio" is used as an informal name for all of them. The name Gladio is the Italian form of gladius, a type of Roman shortsword.

Iraq War Prior to the war, the governments of the United States and the United Kingdom claimed that Iraq's alleged possession of weapons of mass destruction (WMD) posed a threat to their security and that of their coalition/regional allies.[49][50][51] In 2002, the United Nations Security Council passed Resolution 1441 which called for Iraq to completely cooperate with UN weapon inspectors to verify that Iraq was not in possession of WMD and cruise missiles. Prior to the attack, the United Nations Monitoring, Verification and Inspection Commission (UNMOVIC) found no evidence of WMD, but could not yet verify the accuracy of Iraq's declarations regarding what weapons it possessed, as their work was still unfinished. The leader of the inspectors, Hans Blix, estimated the time remaining for disarmament being verified through inspections to be "months".[nb 2][52][53][54][55] Background[edit]

Engineering Ground Zero Engineering Ground Zero PBS Airdate: September 7, 2011 NARRATOR: It will be the tallest building in America, a decade-long project to transform tragedy into triumph. Operation Paperclip Operation Paperclip (originally Operation Overcast) (1949–1990) was the Office of Strategic Services (OSS) program in which over 1,500 German scientists, engineers, and technicians from Nazi Germany and other foreign countries were brought to the United States for employment in the aftermath of World War II.[1] It was conducted by the Joint Intelligence Objectives Agency (JIOA), and in the context of the burgeoning Cold War. One purpose of Operation Paperclip was to deny German scientific expertise and knowledge to the Soviet Union[1] and the United Kingdom,[2] as well as inhibiting post-war Germany from redeveloping its military research capabilities. The Soviet Union had competing extraction programs known as "trophy brigades" and Operation Osoaviakhim.[3] Although the JIOA's recruitment of German scientists began after the Allied victory in Europe on May 8, 1945, U.S. President Harry Truman did not formally order the execution of Operation Paperclip until August 1945. Rocketry