» 33 Conspiracy Theories That Turned Out To Be True, What Every Person Should Know… Alex Jones 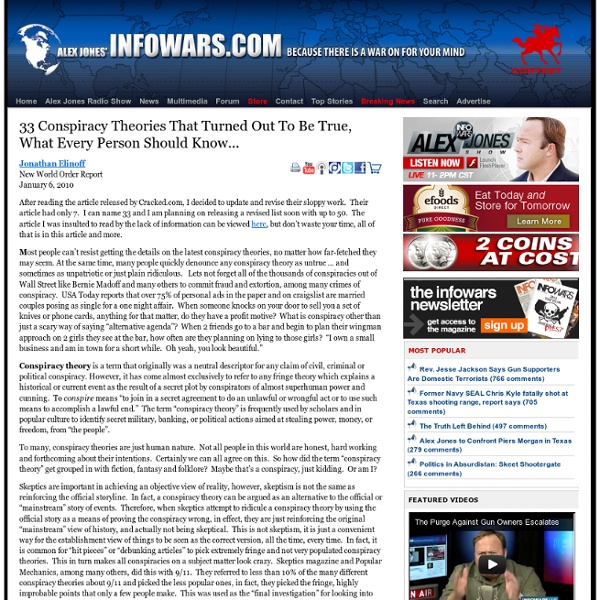 New World Order Report January 6, 2010 After reading the article released by Cracked.com, I decided to update and revise their sloppy work. ost people can’t resist getting the details on the latest conspiracy theories, no matter how far-fetched they may seem. is a term that originally was a neutral descriptor for any claim of civil, criminal or political conspiracy. To many, conspiracy theories are just human nature. Skeptics are important in achieving an objective view of reality, however, skeptism is not the same as reinforcing the official storyline. In fact, if one were to look into conspiracy theories, they will largely find that thinking about a conspiracy is associated with lunacy and paranoia. I find it extremely odd that the assumption is on thousands of participants in a conspiracy. A d v e r t i s e m e n t What follows are some of these most shocking modern conspiracy theories that turned out true after thorough investigation by our society.

Scientific Speed Reading: How to Read 300% Faster in 20 Minutes (Photo: Dustin Diaz) How much more could you get done if you completed all of your required reading in 1/3 or 1/5 the time? Increasing reading speed is a process of controlling fine motor movement—period. This post is a condensed overview of principles I taught to undergraduates at Princeton University in 1998 at a seminar called the “PX Project”. The below was written several years ago, so it’s worded like Ivy-Leaguer pompous-ass prose, but the results are substantial. I have never seen the method fail. The PX Project The PX Project, a single 3-hour cognitive experiment, produced an average increase in reading speed of 386%. It was tested with speakers of five languages, and even dyslexics were conditioned to read technical material at more than 3,000 words-per-minute (wpm), or 10 pages per minute. If you understand several basic principles of the human visual system, you can eliminate inefficiencies and increase speed while improving retention. The Protocol First – Determining Baseline