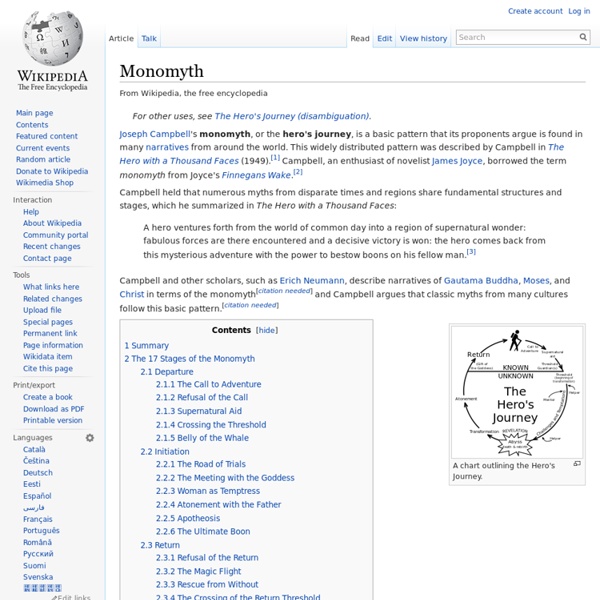 Joseph Campbell's monomyth, or the hero's journey, is a basic pattern that its proponents argue is found in many narratives from around the world. This widely distributed pattern was described by Campbell in The Hero with a Thousand Faces (1949).[1] Campbell, an enthusiast of novelist James Joyce, borrowed the term monomyth from Joyce's Finnegans Wake.[2] Campbell held that numerous myths from disparate times and regions share fundamental structures and stages, which he summarized in The Hero with a Thousand Faces: A hero ventures forth from the world of common day into a region of supernatural wonder: fabulous forces are there encountered and a decisive victory is won: the hero comes back from this mysterious adventure with the power to bestow boons on his fellow man.[3] A chart outlining the Hero's Journey. Summary[edit] In a monomyth, the hero begins in the ordinary world, and receives a call to enter an unknown world of strange powers and events. The 17 Stages of the Monomyth[edit]

Gilgamesh, Epic of From New World Encyclopedia The Epic of Gilgamesh is an epic poem from Babylonia and arguably the oldest known work of literature. The story includes a series of legends and poems integrated into a longer Akkadian epic about the hero-king Gilgamesh of Uruk (Erech, in the Bible), a ruler of the third millennium B.C.E. Several versions have survived, the most complete being preserved on eleven clay tablets in the library of the seventh-century B.C.E. Assyrian king Ashurbanipal. 8 ½ Character Archetypes You Should Be Writing Here’s the thing about character archetypes: everybody’s got his own take. Do you run with Joseph Campbell’s gazillion and one Jungian archetypes? How about Dramatica’s double quad of eight archetypes? Or maybe screenwriter Michael Hauge’s simple offering of four main players? Nothing wrong with running with all of them.

hero's journey "A Practical Guide to Joseph Cambell’s The Hero with a Thousand Faces" by Christopher Vogler © 1985 “There are only two or three human stories, and they go on repeating themselves as fiercely as if they had never happened before.” In the long run, one of the most influential books of the 20th century may turn out to be Joseph Campbell’s THE HERO WITH A THOUSAND FACES. The book and the ideas in it are having a major impact on writing and story-telling, but above all on movie-making.

Three-act structure Three- act structure Plot Line Graph by Wendell Wellman The three-act structure is a model used in writing, including screenwriting, and in evaluating modern storytelling that divides a fictional narrative into three parts, often called the Setup, the Confrontation and the Resolution.

Deep Underground Poetry : Welcome Siharyvani - Deep Underground Poetry Community Any questions? Help Advanced Search a place to share your original poetry, prose and lyrics Recent Discussions COMPETITIONS Eternal Darkness - 6 words per line, 3 lines - Today at 2:52pm by Tony Pena (Quill-in-Heart) ( 1 ... 56 57 58 59 60 ) COMPETITIONS Who has the most sinister mind, spirt, and soul? What does a game “producer” do, exactly? (exclusive) Editor’s Note: Reaction to our first exclusive TERA dev diary and massive TERA art exhibit was positive, and the game itself seems to be doing well now that launch woes have been stifled, so I’m happy to present the next entry from En Masse Entertainment Producer Chris Hager. If you have any specific games or aspects of game development you’d like to know more about, shout them out in the comments and I’ll see what I can do. Enjoy!

postmodernism in poetry To repeat a previous simplification: whereas Classicism, Realism and Romanticism all deal with the outside world, contemporary literature, by contrast, is commonly a retreat into the writer's consciousness — to make autonomous creations that incorporate diverse aspects of modern life (Modernism), or free-wheeling creations constructed of a language that largely points to itself (Postmodernism). Postmodernism began in the sixties, when there developed on both sides of the Atlantic a feeling that poetry had become too ossified, backward-looking and restrained. {1} The old avant garde had become respectable, replacing one orthodoxy by another. The poetry commended by the New Criticism — and indeed written by its teachers — was self-contained, coherent and paradoxical. Certainly it was clever, with striking imagery, symbolism and structural economy, but it was also far too predictable.

Ponce de Leon and the Fountain of Youth Myth The Fountain of Youth myth is one that has been told for thousands of years all around the world. It is a mystical story of a spring that restores youth to all who drink from it or bathe in its waters. The myth is so pervasive that different cultures across the world have their own versions and tales. 4 Signs You Might Be Confusing, Not Intriguing, in Your Opening Scene By Janice Hardy, @Janice_Hardy The opening scene of a novel walks a fine line between piquing curiosity and confusing the reader. Opening scenes are under a lot of pressure—they need to pique reader interest, set the scene, introduce characters, and give just enough information to intrigue, but not overload or confuse. That’s a lot to ask of 250 words. In our efforts to hook readers and not give everything away, it’s common for an opening scene to be less than forthcoming with information. We hold back details to sound mysterious, we hide clues we worry will reveal too much, we keep our narrative distance, and sometimes, we even bend over backward not to provide the exact details readers need to become hooked.

Celtic Myths We can see this anthropomorphization clearly with the god Lugh, who gives his name to the Irish summer festival of Lughnasadh. In the earliest Irish myths he is clearly a deity. As such, he offers himself as the saviour of the Tuatha dé Danann, the predecessors of the Milesians or Gaels. Seeking entry at the palace of King Nuada of the Silver Hand, at Tara, he announces each of his skills in turn – ‘Blacksmith, warrior, musician, poet, scholar …’. Each time he is refused entry, until he points out that no one else combines all these skills in one person, as he does.