Get Out: A Bizarre French Animation with a Twist 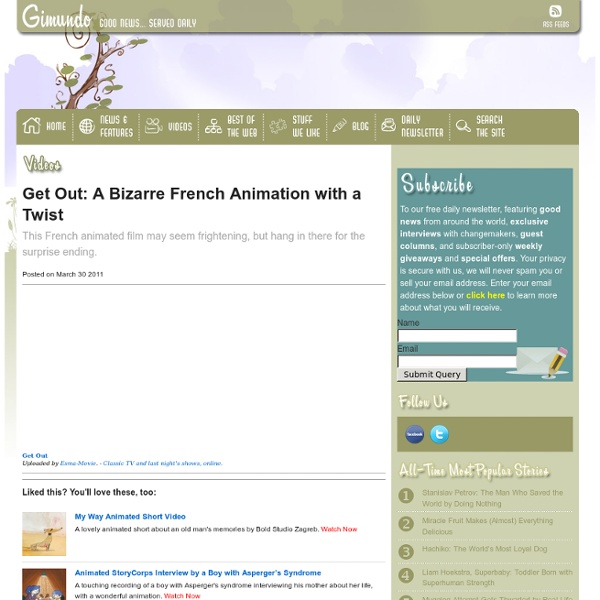 How a Futuristic Environmental Design Idea Became a Reality | GreenBiz.com - StumbleUpon What vehicle architecture is most appropriate for global markets in the 21st century? Jim Kor, designer of the futuristic Urbee car shares his One Great Idea for changing the future of automotive transport. Kor presented his vision at the State of Green Business Forum in Chicago, laying out how sustainable design for transport can change the world. According to Kor, the solution resides in sustainable design, which is why he designed Urbee in 1996. My favorites Les Dangereux - A Ninja Love Story Extreme Pogo Sticking Is Surprisingly Badass : Discovery Channel - StumbleUpon Who knew that pogo sticks were good for more than seeing how many times you could jump up and down without falling off? (World record: 206,864.) Or that you could use them to grind rails, jump off buildings, do flips and other moves usually reserved for the craziest bikers and most daring skateboarders? Thanks to the good folks at XPOGO, we have this mind-blowing video that proves that the sport of extreme pogo is thriving, having hosted its 8th annual world championships, Pogopalooza, this summer. The jumpers featured in the video are Fred Gryzbowski, Nick McClintock, Tone Staubs, Dalton Smith, Curt Markwardt, Michale Mena, Chadd Deitz, Steve Bennett and Earl Pote.

En Tus Brazos The Hobbit Movie – Peter Jackson Production Blog + Official Trailer Cameos and Special Extras I had some spare time, so I fiddled with the trilogy, looking for all the cameos and trivias. Legenda:LoTR: The Lord of The RingsFoTR: The Fellowship of The RingTTT: The Two TowersRoTK: The Return of The King Director, screenplay writer and producer, his cameos are in all the three movies. In FoTR, he's a soaken walkby in Bree, while the hobbits are looking for the Prancing Pony. In TTT, he's a Rohan soldier, throwing a spear towards the orcs, who are assaulting the Fortress at Helm's Deep. In RoTK, finally, he shows up as a corsar, with other members of the crew. Producer. His cameo is in TTT, as a Rohan soldier, throwing rocks at the orcs while they're trying to smash down the Fortress' door with a battering-ram. Two conceptual designers and an Art Director for the set decoration. Howe and Lee are two of the Kings of the Men who received one of the rings, in FoTR's Prologue. Lee shows up also in TTT, at Helm's Deep, with Hennah. Designer and sculptor for Weta Workshop. Unlucky Cameo, here.