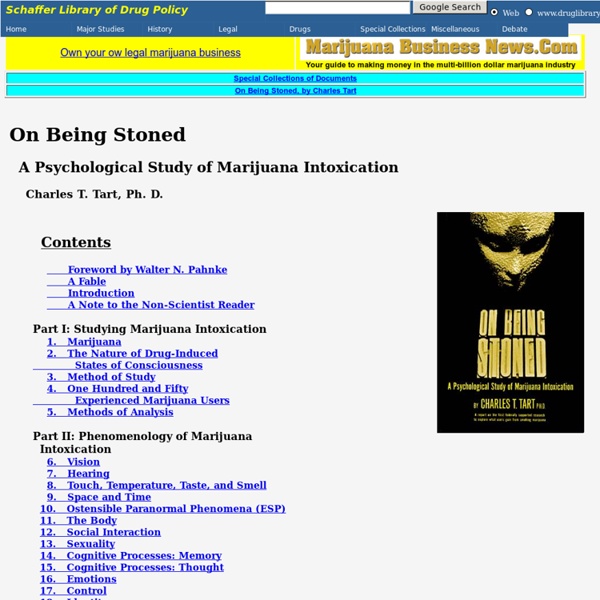 Cannabis-enhancing plant to be marketed worldwide as new drug South African Bushmen have been chewing kanna (Sceletium tortuosum) for hundreds of years to reduce stress, relieve hunger and elevate their moods. Now there are plans to market the exotic plant worldwide as a new over-the-counter drug, according to PhysOrg.com. The first license ever issued to market kanna was given to the South African company HGH Pharmaceutical, who intend to sell it as a dietary supplement.

TakePart - News, Culture, Videos and Photos That Make the World Better Breathe easy, tokers. Smoking marijuana in moderate amounts may not be so bad for your lungs, after all. A new study, published in this month's Journal of the American Medical Association, tested the lung function of over 5,000 young adults between 18 and 30 to determine marijuana's effect on lungs.

Cannabis Vault : Spiritual Use #2 The following is the text of a pamphlet entitled "Marijuana and The Bible" published by the Ethiopian Zion Coptic Church. With offerings of devotion, ships from the isles will meet to pour the wealth of the nations and bring tribute to his feet. The Coptic Church believes fully the teachings of the Bible, and as such we have our daily obligations, and offer our sacrifices, made by fire unto our God with chants and Psalms and spiritual hymns, lifting up holy hands and making melody in our hearts.

Cigar Psychology Could you ever imagine how much you can learn about smoker from Cigars? The way people hold their cigars can tell a lot about their moods and characters. An issue of the Italian almanac, II Tabacco, that appeared in the early nineteen twenties contained a curious article headed "Sigaromanzia" describing twelve positions of the hand holding the cigar with captions about corresponding psychological characteristics of the smoker. Evidently the Italian psychologists of the last century were correct. A similar experiment has been conducted recently by a team of modern experts and the results were almost the same. Boulder pot enforcement costs less than anticipated Much of the money that Boulder budgeted for enforcement of the new recreational marijuana industry has not been spent and likely won't be spent this year as the rush of conversions and new applications the city expected never materialized. In a supplemental budget appropriation made in early 2014, the City Council approved $75,000 for outside legal assistance, $100,000 for forensic accounting services, $20,000 for police overtime, $12,000 for overtime for fire inspections, $96,500 for two new licensing clerks, $85,000 for a new position to review building plans and $85,000 for a new position to do building inspections. Those expected costs were to be paid out of an estimated $2 million in tax revenue from new recreational marijuana businesses. Projections for marijuana revenue are closer to $1.5 million by year's end, but in addition to a significant contingency built into the city's budget, much of the appropriated money has not been spent. 'More of a steady, staggered approach'

And Their Fascinating History February 9, 2012 | Like this article? Join our email list: Stay up to date with the latest headlines via email. Want to get the latest on America's drug & rehab culture? Former surgeon general calls for marijuana legalization By the CNN Wire Staff October 18, 2010 1:11 a.m. EDT Ex-surgeon general: Legalize marijuana Joycelyn Elders tells CNN resources can be better spentShe says the drug's illegality is criminalizing young people "It's not a toxic substance," she saysCalifornia's Proposition 19 would legalize marijuana use in the state (CNN) -- Former U.S. The Effects Of Cannabis On A Web-Based Lifestyle web of a spider on LSD web of a spider on mescaline web of a spider on hashish web of a spider on caffeine Just Say No: web of a drug-naïve spider