Marijuana sales banned in far more places than they're allowed. Yesterday marked the deadline for Colorado's 271 cities and towns and 64 counties to decide whether they want to ban recreational cannabis businesses and sales -- and it is starting to look like Denver will be ganja ground zero. 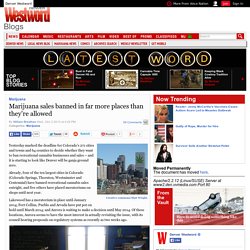 Already, four of the ten largest cities in Colorado (Colorado Springs, Thornton, Westminster and Centennial) have banned recreational cannabis sales outright, and five others have placed moratoriums on shops until next year. Lakewood has a moratorium in place until January 2014; Fort Collins, Pueblo and Arvada have put pot on hold until March 2014; and Aurora is waiting to make a decision until May 2014.

Of these locations, Aurora seems to have the most interest in actually revisiting the issue, with its council hearing proposals on regulatory systems as recently as two weeks ago. But unless and until Aurora gives the okay, Denver will be the lone big city in Colorado that is allowing recreational cannabis sales made legal by the passage of Amendment 64. Clearing the air on pot differences in Huerfano County. WALSENBURG— The Huerfano County planning commission held a joint meeting (no pun intended) Wednesday night, March 12, on whether to allow a moratorium in the county against the growing or selling of marijuana to expire at the end of the month. 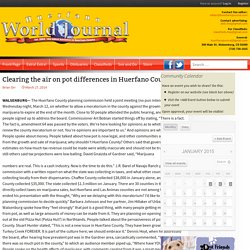 Close to 50 people attended the public hearing, and about 15 people signed up to address the board. Commissioner Art Bobian started things off by stating, “There is a fact. The fact is, amendment 64 was passed by the voters. County hears marijuana concerns, drafting regs. By Matie Belle Lakish Saguache County Commissioners held their official Public Hearing on the proposed Retail Amendment to the county’s existing Medical Marijuana Ordinance on February 18. 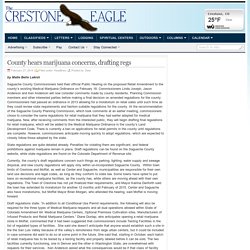 Commissioners Linda Joseph, Jason Anderson and Ken Anderson will now consider comments made by county residents, Planning Commission members and other interested parties before making a final decision on amended regulations for the county. Commissioners had passed an ordinance in 2013 allowing for a moratorium on retail sales until such time as they could review state requirements and fashion suitable regulations for the county. At the recommendation of the Saguache County Planning Commission, which took comments at an earlier meeting, commissioners chose to consider the same regulations for retail marijuana that they had earlier adopted for medical marijuana. 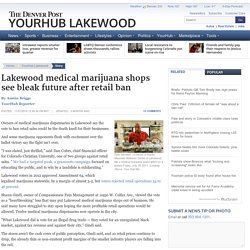 (Lindsay Pierce, Your Hub file) Owners of medical marijuana dispensaries in Lakewood say the vote to ban retail sales could be the death knell for their businesses. And some marijuana opponents flush with excitement over the ballot victory say the fight isn't over. "I was elated, just thrilled," said Dan Cohrs, chief financial officer for Colorado Christian University, one of two groups against retail sales. " We had a targeted push, a grassroots campaign focused on educating the public, and to win by a landslide is exhilarating. " Lakewood voters in 2012 approved Amendment 64, which legalized marijuana statewide, by a margin of almost 3-2, but voters rejected retail operations 54 to 46 percent.

Shaun Gindi, owner of Compassionate Pain Management at 11950 W. Marijuana: Check out Ten New Towns Getting Shops With Recreational Licenses. The marijuana business in Colorado keeps growing -- like a weed, as a matter of fact. 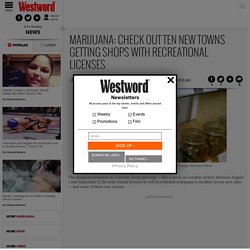 Between August 1 and September 2, the state issued licenses to sell recreational marijuana to facilities in ten new cities -- and none of them was Aurora. See also: Marijuana: Three Colorado communities to get their first recreational pot shops Roots Rx, 165 Southside Drive, is the first dispensary to be licensed for recreational sales in Basalt. No word on when the dispensary will open. Town of Lyons. Analysis of State Medical Marijuana Laws As you know, the Board of Trustees directed staff to prepare a draft ordinance establishing zoning standards for medical marijuana dispensaries in the Town of Lyons, for review by the Planning and Community Development Commission. 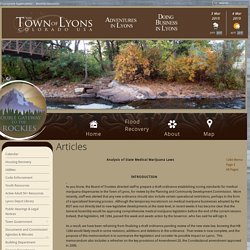 More recently, staff was alerted that any new ordinance should also include certain operational restrictions, perhaps in the form of a specialized licensing process. Although the temporary moratorium on medical marijuana businesses adopted by the BOT was not directly tied to new legislative developments at the state level, in recent weeks it has become clear that the General Assembly would be approving comprehensive medical marijuana legislation before the end of the current session. Indeed, that legislation, HB 1284, passed this week and awaits action by the Governor, who has said he will sign it. La Veta. Colorado Municipal League: Outcome on pot, taxes and other issues.

Telluride Daily Planet > Archives > News > Ophir to discuss town-run dispensary. The Ophir general assembly will consider Tuesday whether it wants to explore the possibility of a town-run medical marijuana dispensary as a means to create some new revenue. 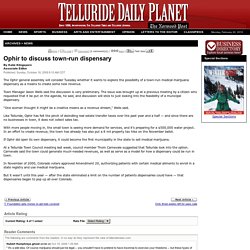 Town Manager Jason Wells said the discussion is very preliminary. The issue was brought up at a previous meeting by a citizen who requested that it be put on the agenda, he said, and discussion will stick to just looking into the feasibility of a municipal dispensary. “One woman thought it might be a creative means as a revenue stream,” Wells said. Like Telluride, Ophir has felt the pinch of dwindling real estate transfer taxes over the past year and a half — and since there are no businesses in town, it does not collect sales tax. With more people moving in, the small town is seeing more demand for services, and it’s preparing for a $500,000 water project. Snowmass Village not ready to go to marijuana. Estes Park moratorium on medical marijuana dispensaries won't change in 2013 - Estes Park Trail-Gazette. Granby moves to block marijuana shop. Kremmling bans medical marijuana dispensaries. Town of Red Cliff Marijuana Retail Ban, Question 2G (November 2014) - Ballotpedia.

Marijuana: City of Fort Collins. This site is intended to be an informational overview of marijuana laws in Fort Collins but it is up to each individual to understand and follow the law. 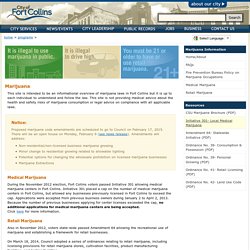 This site is not providing medical advice about the health and safety risks of marijuana consumption or legal advice on compliance with all applicable laws. Federal Heights voters approve medical marijuana, reject retail pot shops. By Megan MitchellYourHub Reporter Posted: 11/05/2014 11:49:13 AM MST|Updated: 4 months ago. 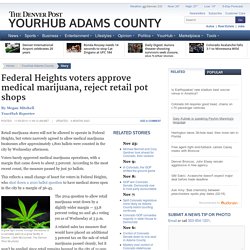 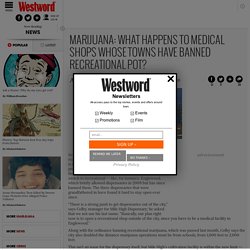 This is not a surprise, since most already had an ordinance prohibiting medical marijuana stores. But what about those that have MMJ shops that now won't be able to switch to recreational -- like, for instance, Englewood, which briefly allowed dispensaries in 2009 but has since banned them. The three dispensaries that were grandfathered in have found it hard to stay open ever since. "There is a strong push to get dispensaries out of the city," says Colby, manager for Mile High Dispensary; he asked that we not use his last name. "Basically, our plan right now is to open a recreational shop outside of the city, since you have to be a medical facility in Englewood. " Along with the ordinance banning recreational marijuana, which was passed last month, Colby says the city also doubled the distance marijuana operations must be from schools, from 1,000 feet to 2,000 feet. Eagle, CO - Official Website - Town Marijuana Regulations.

1. Medical Marijuana Businesses The Town of Eagle has adopted local regulations for Medical Marijuana Businesses through both a Medical Marijuana Business License required through Title 5 of the Municipal Code and a Special Use Permit required through the Title 4 of the Municipal Code (aka Land Use and Development Code). Basalt eases up on medical pot rules. The Basalt Town Council decided to chill out when it came to finalizing regulations on medical marijuana operations Tuesday night. The council voted 6-0 to approve a second and final reading of an ordinance that establishes rules for medical marijuana dispensaries and ends a moratorium on them. After a discussion with representatives of the medical marijuana industry, the board also eased restrictions on the days and times of operation for dispensaries, lifted a ban on advertising signs and changed the permitting requirement.

The town’s proposed regulations allowed medical marijuana dispensaries to operate only from 9 a.m. to 4 p.m. on Monday through Friday. Lauren Maytin, an Aspen attorney who represents clients in the medical marijuana industry, told the council the hours would penalize patients who have an ailment flare up during their workday. Broomfield bans marijuana businesses until 2015. By Megan Quinn Camera Staff Writer Posted: 02/26/2013 09:53:22 PM MST | Updated: about a year ago BROOMFIELD -- The City Council on Tuesday night passed the final reading of an ordinance that will temporarily ban marijuana-related businesses until 2015, then allow residents to vote on the issue. Pot shops in Denver's suburbs fewer and farther between than in city.

By John AguilarThe Denver Post Posted: 06/01/2014 12:01:00 AM MDT|Updated: 8 months ago No one can dispute that Denver is the king of cannabis in Colorado. With 75 recreational marijuana stores for the city's 650,000 residents, the hub of the metro area is well-defined as the epicenter. Seventeen vie for single FH pot retail license; lottery pick in store. Marijuana Regulation and Licensing. Archuleta County, CO - Official Website - Marijuana Business Establishments.

TRINIDAD, Colo. . - First of Aurora's 21 Rec Dispensaries Set to Open Next Week, More to Follow. It was all over the news when Aurora decided to allow recreational dispensaries within city limits -- but October 1, the date when those dispensaries could theoretically open doors, came and went without a puff of smoke. So what's the status with these 21 new recreational dispensaries? Marijuana questions pepper voter ballots along Front Range. (Denver Post file) Several marijuana measures, mostly tax questions, are on ballots across the state this election season, including whether Lakewood will allow recreational shops in the city of 145,000 residents.

The Lakewood City Council voted to put the recreational marijuana question on the ballot in July after a public hearing on the subject. Here's what Colorado has decided on Amendment 64. It angered thousands when Colorado Springs decided not to plunge into recreational-marijuana sales, but this city's found plenty of company on the sidelines. It's the rare Colorado municipality with the intestinal fortitude to go where it's never gone before. Still, it's being done in big cities (Denver) and small (Oak Creek), giving us all the chance to see democracy in action (somewhere else).

Here's an account of who's doing what; let us know of anything we missed by writing bryce@csindy.com, or commenting online. Recreational Marijuana Sales Banned In More Than Two Dozen Colorado Cities.