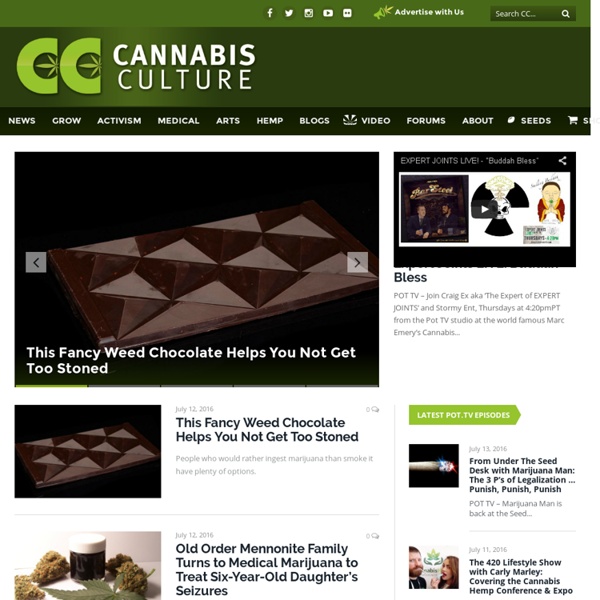 Mike Rita performing at Vapor Central tonight as the Host of STONER SUNDAYS! Toke up & Tune In Webcast starts around 9pm, 667 Yonge Street !! Be There !! Or Here on POTTV Peace, As you all know it is yet the end of another year.Time to leave behind the bad omens and focus on the path that lies ahead. To start the year off Iron Wind Hip Hop is what's about to go down at Vapor Central Jan.12,2014 on Stoner Sundays Hosted by comedian Mike Rita.

Marijuana Fights Cancer and Helps Manage Side Effects, Researchers Find Mounting evidence shows ‘cannabinoids’ in marijuana slow cancer growth, inhibit formation of new blood cells that feed a tumor, and help manage pain, fatigue, nausea, and other side effects. Cristina Sanchez, a young biologist at Complutense University in Madrid, was studying cell metabolism when she noticed something peculiar. She had been screening brain cancer cells because they grow faster than normal cell lines and thus are useful for research purposes. Hemp.Org, Campaign for the Restoration and Regulation of Hemp, CRRH, The Hemp and Cannabis Foundation, THCF, THCF Medical Clinics, Medical Marijuana Clinics, Medical Marijuana Doctors, Medical Marijuana Referrals, Cannabis Common Sense, Cannabis Videos, H Help End Marijuana Prohibition in Oregon in 2014 Donate to Help End Marijuana Prohibition in Oregon in 2014 Cannabis Amendment I-21, the Oregon Cannabis Amendment, is a constitutional amendment that would end criminal penalties for marijuana and give adult Oregonians permission to grow and use cannabis for recreational purposes. ...

5 New Cannabis Discoveries That You Won’t Hear About in the Corporate Media Scientific discoveries are published almost daily in regard to the healing properties of the cannabis. But most of these findings appear solely in subscription-only peer-reviewed journals and, therefore, go largely unnoticed by the mainstream media and by the public. Here are five just-published cannabis-centric studies that warrant attention. Investigators at the Kaiser Permanente Los Angeles Medical Center, Department of Neurology assessed the association of cannabis use and tobacco smoking on the risk of bladder cancer in a multiethnic cohort of more than 80,000 men aged 45 to 69 years old over an 11-year period. The results? While men who smoked cigarettes possessed a 1.5-fold increased risk of cancer, those who only smoked pot possessed a 45 percent reduced risk of being diagnosed with the disease.

Cannabis Extract Fights 'Incurable Form' of Leukemia Sayer Ji, Green Med InfoWaking Times A remarkable case report documents a 14-year old girl who, after 34-months of chemo, radiation and bone marrow transplant treatments, was given up for dead. Her family discovered research on cannabis extract, and before she died of a secondary complication of her original treatment, used it successfully to put her leukemia into remission. There are plenty of anecdotal reports of the successful use of cannabis in treating cancer, but few cases occur under conventional medical supervision, and virtually none make it into a peer-reviewed biomedical journal as a case report. Remarkably, however, just such a case was reported in Case Reports in Oncology last year, and involved a 14-year girl diagnosed with a form of cancer of the white blood cells known as acute lymphoblastic leukemia (ALL).

Marijuana Medical Handbook: A Guide to Therapeutic Use - Cannabis Career Institute Marijuana Medical Handbook: A Guide to Therapeutic Use By Ed Rosenthal, Dale Gieringer, and Tod Mikuriya, MD Marijuana Medical Handbook is the only book written for people who have little or no experience with marijuana, but want an honest and informative account of its medical value, especially concerning symptoms related to cancer, AIDS/HIV, glaucoma, and many more ailments and illnesses. Marijuana is an invaluable and safe medical resource when used properly. Buy Cannabis Seeds + Marijuana Seeds Welcome to Seedsman.com. We have been selling cannabis seeds online since 2003 and are considered one of the most trustworthy and reliable online seedbanks in the world. Our company has evolved significantly over the past decade.