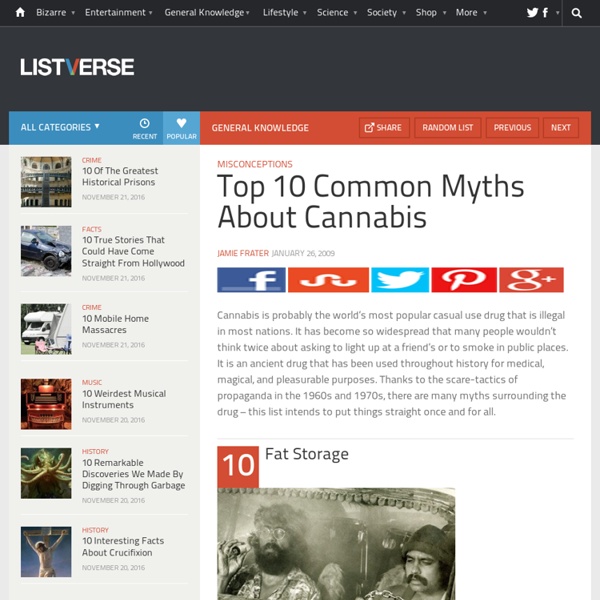 Misconceptions Cannabis is probably the world’s most popular casual use drug that is illegal in most nations. It has become so widespread that many people wouldn’t think twice about asking to light up at a friend’s or to smoke in public places. It is an ancient drug that has been used throughout history for medical, magical, and pleasurable purposes. Thanks to the scare-tactics of propaganda in the 1960s and 1970s, there are many myths surrounding the drug – this list intends to put things straight once and for all. Myth: Cannabis’ active ingredient THC gets stored in body fat and its effects can last days or even weeks Fact: It is true that cannabis (like many other drugs) enters the body’s fat stores, and it is for this reason that it can be detected long after use, but that is the only part of this myth which is true. Myth: Cannabis use causes memory loss and a general reduction in logic and intelligence Myth: Cannabis has been scientifically proven to be harmful Sources:1. Jamie Frater

Mistaken Identity In 1903, a prisoner named Will West arrived at Leavenworth. The record clerk took the photographs above and, thinking he remembered West, asked whether he had been there before. West said no. The clerk took some measurements, went to the file, and produced this record, bearing the name William West: Amazed, the prisoner said, “That’s my picture, but I don’t know where you got it, for I know I have never been here before.” Incredibly, this was true. The case became a strong argument in favor of the new science of fingerprinting.

Legal Advice For Stoners How Dya Smoke Pot and Stay Out of Jail?"Be cool, be careful, and keep your mouth shut." This one caused quite a stir. (See The Strangers Letters to the Editor: 12/6/01 and 12/13/01.) (2 pages) Top 10 Places You Don’t Want To Visit Travel In previous lists we have looked at amazing holiday destinations – today we are looking at the bottom ten; these are ten places you don’t want to visit! Having said that, maybe the curious would get a thrill from visiting some of these strange and dangerous places, but for most of us, reading about it is quite enough. Feel free to mention any other contenders for the list in the comments. Great Pacific Garbage Patch Pacific Ocean The Great Pacific Garbage Patch, also described as the Pacific Trash Vortex, is a gyre of marine litter in the central North Pacific Ocean located roughly between 135° to 155°W and 35° to 42°N. The Izu Islands are a group of volcanic islands stretching south and east from the Izu Peninsula of Honsh? The Door to Hell Turkmenistan Address: Derweze, Turkmenistan This has featured on listverse before, but it would be remiss of us to exclude it from this list. Alnwick Poison Gardens England Address: Denwick Lane, Alnwick, NE66 1YU, England Mud Volcanoes of Azerbaijan

4/20 Pot Protesters 4/20 is not a random date. It’s almost ‘420′ – insider shorthand for cannabis consumption. So on April the 20th thousands of people around the USA protested for legalization of marijuana. Places to Visit in the USA This Summer (10 pics) For Rent : Necker Island For Only $53K Per Night (37 pics) Hanging Tents (19 pics) Desert in Japan (17 pics) Artists City in China (11 pics) Badass Taiwanese Soldiers (15 pics) Winter At The History’s Largest Nuclear Disaster (30 pics) Brisbane : Before And After The Devastation Of The Flood (40 pics) 18 Hacked Digital Road Signs Road signs are pretty boring, albeit important. They tell us where to go, what to do and what we should avoid on the road. Road signs don't usually make us laugh -- until people figured out that they could be altered in a number of ways. Pasting a sign over another sign is a simple idea, but hacking into the digital road signs that warn us about traffic delays and road hazards is a whole new level of dedication to mishievous shenanigans. Here are 19 of the funniest hacked digital road signs. "You'll Never Get to Work on Time, Haha!!" "Take Your SUV Back to Detroit" "Trapped in Sign Factory" "Sorry Mario -- The Princess Is in Another Castle" "This Sign Has Been Hacked" "Drive Drunk" "Prepare to Be Annoyed" Zombies are a favorite for these sign-hackers. "Nobody Has Ever Loved You" "Extreme Fire Hazard -- Don't Even Fart in the Forest" "OMG The British Are Coming" "Raptors Ahead, Caution" "New York Is Dying" "There May Be Trouble Ahead" "Party At Julia's 2nite" "Klaatu Barada Nikto" "UFO Crossing Ahead"

Stoner Games Top 10 Funny Pictures of June 2010 In June 2010 there were number of pictures posted on popular social media site like Reddit, Digg, Stumbleupon etc. From those huge collection of images we have selected the most funny pictures of June 2010, I hope you may like our selection. Let us know if you have any other picture that could be in this list, in comments below. There are few Gif files towards the end, and they may take a little while to load. He ruined this kid’s life Laziness The Controller You Wish You Were Playing With At E3 Yellow Card I fixed the iPhone 4 “holding” problem I have you Now Luckiest Day of His Life The best stunt of the century Now This Is A Great Roommate!

And I Am Not Lying » Blog Archive » Excuse Me, Waiter…? There’s a Large Bird of Prey in My Soup. Hey, how was your lunch today? Yeah? Good. Oh, mine was fine. Well… there was this one part where A F***ING HAWK FLEW INTO THE RESTAURANT WHERE I WAS EATING, AND LANDED ON MY FOOD. Yeah. really. I was sitting at a window seat next to the open door, and my food had just been brought out. The guy working the counter came out, and we were both (slowly and carefully) snapping pictures with our phones. “Man, you inna wrong place, bird! But after few more calm seconds, once we were just standing there trying to figure out what the hell to do next, the hawk leapt up and made a beeline through the air directly at yours truly. The hawk just sat there for a little while, getting jerk BBQ sauce all over its talons and looking all emo, until it was spooked by the restaurant’s delivery guy walking in, whereupon it shot past all of us into the kitchen. “What restaurant was this?” I am so glad that you asked. The place is called, I kid you not… “BIRDIE’S”. * drops the mic *