Cannabis and Cannabinoids for Cancer. New Report Blasts DEA For Spending 4 Decades Obstructing Marijuana Science. The Drug Enforcement Administration has been impeding and ignoring the science on marijuana and other drugs for more than four decades, according to a report released this week by the Drug Policy Alliance, a drug policy reform group, and the Multidisciplinary Association for Psychedelic Studies, a marijuana research organization. 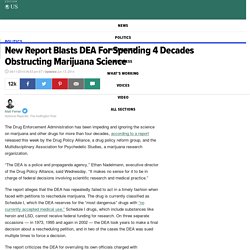 “The DEA is a police and propaganda agency,” Ethan Nadelmann, executive director of the Drug Policy Alliance, said Wednesday. “It makes no sense for it to be in charge of federal decisions involving scientific research and medical practice.” The report alleges that the DEA has repeatedly failed to act in a timely fashion when faced with petitions to reschedule marijuana. The drug is currently classified as Schedule I, which the DEA reserves for the “most dangerous” drugs with “no currently accepted medical use.”

Schedule I drugs, which include substances like heroin and LSD, cannot receive federal funding for research. 27 Reasons Why U.S. The Truth About Driving While Stoned. In under a decade, it’s become America’s most recognizable autism advocacy organization. 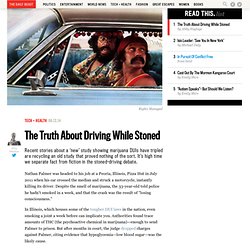 But some opponents say its research tactics and spending habits are more hurtful than helpful. From the iconic puzzle-piece decals on minivans to the Empire State Building lit up in blue, Autism Speaks has entered mainstream America. For many, the organization is synonymous with the autism advocacy movement—an incredible feat for an organization that’s been around for less than a decade. Seeing the logo at Major League Baseball games and local walkathons is a sign that a disorder once only associated with Rain Man is getting the mainstream attention and care it deserves.

How WE Quit Smoking Pot. 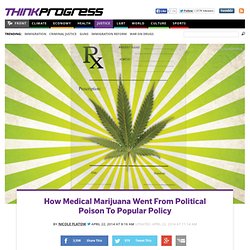 Like many in the medical marijuana community, Grinspoon started out as a skeptic intent on researching marijuana’s harms. But his perspective shifted after a personal experience: He had a son with leukemia who found relief only after he started using marijuana before his chemotherapy treatments. Once he started researching marijuana, Grinspoon found that existing information about marijuana was based on propaganda rather than rigorous scientific study. “I came to realize that I was the one who was misinformed — that despite my training in science and medicine, I had been brainwashed like just about every other citizen of this country,” Grinspoon said in a 2001 interview.

In February, Missouri Gov. A month earlier, when Louisiana Gov. 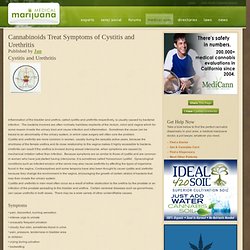 The bacteria involved are often normally harmless residents of the rectum, colon and vagina which for some reason invade the urinary tract and cause infection and inflammation. Sometimes the cause can be traced to an abnormality of the urinary system, in which case surgery will often cure the problem. Cystitis and urethritis are more common in women, usually during the sexually active years, because the shortness of the female urethra and its close relationship to the vagina makes it highly accessible to bacteria. Urethritis can result if the urethra is bruised during sexual intercourse, when symptoms are caused by mechanical irritation rather than infection. 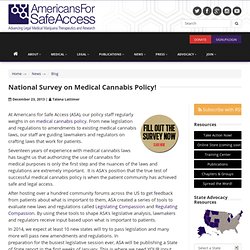 From new legislation and regulations to amendments to existing medical cannabis laws, our staff are guiding lawmakers and regulators on crafting laws that work for patients. Are Hemp Seeds The Newest Superfood? : The 420 Times. Not da’ kind bud, but it is beneficial to mankind. 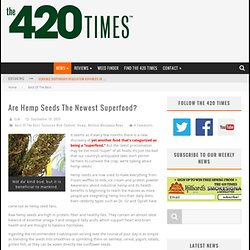 It seems as if every few months there is a new discovery of yet another food that’s categorized as being a “superfood.” But the latest proclamation may be the most “super” of all foods, it’s just too bad that our country’s antiquated laws don’t permit farmers to cultivate the crop; we’re talking about hemp seeds! Hemp seeds are now used to make everything from frozen waffles to milk, ice cream and protein powder. Awareness about industrial hemp and its health benefits is beginning to reach the masses as more people are integrating hemp into their daily diets.

Even celebrity types such as Dr. Raw hemp seeds are high in protein, fiber and healthy fats. Ingesting the recommended 3-tablespoon serving over the course of your day is as simple as blending the seeds into smoothies or sprinkling them on oatmeal, cereal, yogurt, salads, grilled fish, or they can be eaten directly like sunflower seeds. Related post: How To: Make Your Own Hemp Milk. Magic Mushrooms.