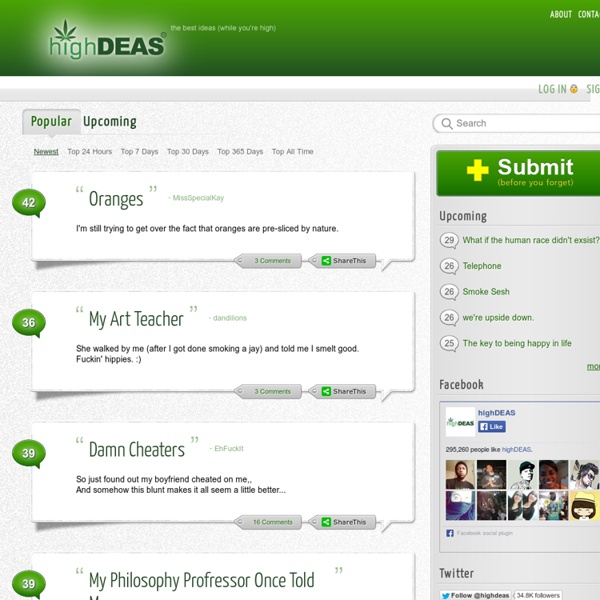 Super High Me Determined to find out the true effects of marijuana on the human body, stand-up comedian and former Stoner of the Year Doug Benson documents his experience avoiding pot for 30 days and then consuming massive amounts of the drug for 30 days. More than just an amusing story of one man's quest to get super high, this documentary also examines the hotly contested debate over medical marijuana use. Although the film is inspired by a joke which was inspired by Super Size Me, don’t expect to see the same dramatic reactions. Morgan Spurlock’s documentary about the dangers of excessive unhealthy eating was shockingly unhealthy for the filmmaker.

Cannabidiol helps neuropathy pain Cannabidiol—a compound derived from marijuana—may be a promising new treatment to prevent the development of painful neuropathy in patients receiving the chemotherapy drug paclitaxel, according to animal experiments reported in the October issue of Anesthesia & Analgesia, official journal of the International Anesthesia Research Society (IARS). "Our preliminary findings…indicate that cannabidiol may prevent the development of paclitaxel-induced allodynia in mice and therefore be effective at preventing dose-limiting paclitaxel-induced peripheral neuropathy in humans," according to the report by Sara Jane Ward, Ph.D., and colleagues of Temple University School of Pharmacy, Philadelphia. In Female Mice, Cannabidiol Reduces Paclitaxel-Induced Neuropathy Paclitaxel—commonly used in the treatment of advanced breast or ovarian cancer—can cause nerve damage (neuropathy), leading to symptoms like pain, numbness, or tingling.

"The egg" - Page 11 You were on your way home when you died. It was a car accident. Nothing particularly remarkable, but fatal nonetheless. You left behind a wife and two children. It was a painless death. Welcome Since it first went online in 1998, Drug War Facts provides reliable information with applicable citations on important public health and criminal justice issues. It is updated continuously by its current Editor, Doug McVay. Most charts, facts and figures are from government sources, government-sponsored sources, peer reviewed journals and occasionally newspapers. In all cases the source is cited so that journalists, scholars and students can verify, check context and obtain additional information. Our mission is to offer useful facts, cited from authoritative sources, to a debate that is often characterized by myths, error, emotion and dissembling.

The Best of Kravin Glass Pipes Kravin Glass, located in Colorado, creates some of the most unique and intricate glass pipes on the market. The examples we’ve featured below are some of their finest, but you can find several more examples on their homepage, including videos of their creation. Unique glass pipes with evolving shapes and styles. Image credits: Kravin Glass Hemp Is the Far Bigger Economic Issue Hiding Behind Legal Marijuana From Alternet.org If the upcoming pot legalization ballot in California were decided by hemp farmers like George Washington and Thomas Jefferson, it would be no contest. For purely economic reasons, if you told the Constitutional Convention in 1787 that the nation they were founding would someday make hemp illegal, they would have laughed you out of the room. If California legalizes pot, it will save the state millions in avoided legal and imprisonment costs, while raising it millions in taxes. But with legal marijuana will come legal hemp.

SCHOPENHAUER'S 38 STRATAGEMS, OR 38 WAYS TO WIN AN ARGUMENT Arthur Schopenhauer (1788-1860), was a brilliant German philosopher. These 38 Stratagems are excerpts from "The Art of Controversy", first translated into English and published in 1896. Carry your opponent's proposition beyond its natural limits; exaggerate it. The more general your opponent's statement becomes, the more objections you can find against it. raising awareness of the consequences of prohibition Special to Drug War Chronicle by Houston-based investigative journalist Clarence Walker, cwalkerinvestigate@gmail.com. Part 9 of his continuing series on Prosecutorial Misconduct and Police Corruption in Drug Cases Across America. Camden, New Jersey.