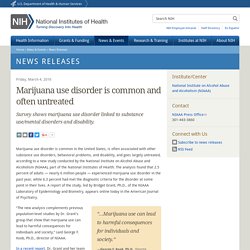 Marijuana use disorder is common in the United States, is often associated with other substance use disorders, behavioral problems, and disability, and goes largely untreated, according to a new study conducted by the National Institute on Alcohol Abuse and Alcoholism (NIAAA), part of the National Institutes of Health. Bill would legalize recreational marijuana use in Michigan. LANSING — A state lawmaker has introduced legislation to legalize recreational use of marijuana in Michigan, a move he says will free up police to “focus on violent and property crimes.’’ 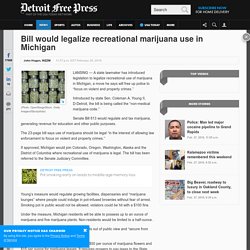 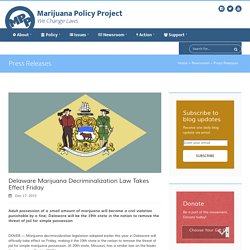 (A 20th state, Missouri, has a similar law on the books that goes into effect in 2017.) Report: Synthetic marijuana caused Chandler Jones’ hospitalization. Getty Images A little more light has come to the curious case of Patriots defensive end Chandler Jones. 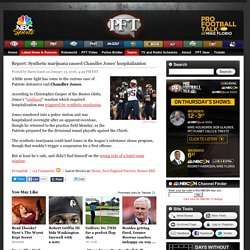 According to Christopher Gasper of the Boston Globe, Jones’s “confused” reaction which required hospitalization was triggered by synthetic marijuana. Jones wandered into a police station and was hospitalized overnight after an apparent overdose, though he returned to the practice field Monday, as the Patriots prepared for the divisional round playoffs against the Chiefs. 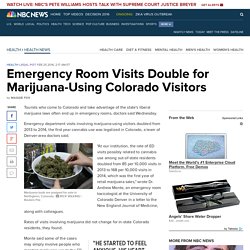 Emergency department visits involving marijuana-using visitors doubled from 2013 to 2014, the first year cannabis use was legalized in Colorado, a team of Denver-area doctors said. "At our institution, the rate of ED visits possibly related to cannabis use among out-of-state residents doubled from 85 per 10,000 visits in 2013 to 168 per 10,000 visits in 2014, which was the first year of retail marijuana sales," wrote Dr. Andrew Monte, an emergency room toxicologist at the University of Colorado Denver in a letter to the New England Journal of Medicine, along with colleagues. Marijuana in Colorado: Know the facts. Learn the laws. Why Elizabeth Warren thinks legalizing marijuana could help end America’s opioid addiction crisis. Sen. 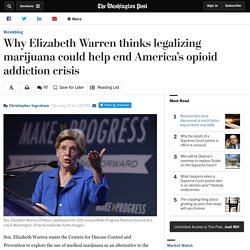 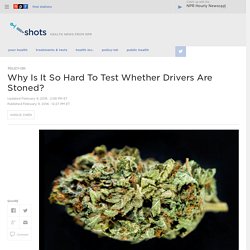 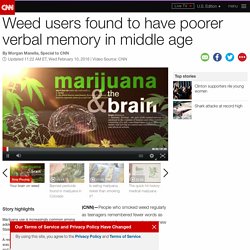 In fact, a recent survey of high school students found more teens use marijuana than tobacco. One reason: a perception that it's not harmful For this study, researchers randomly selected more than 5,000 young adults from 18 and 30 and followed up with them at varying points over 25 years. Australia Commits to Legal Growing of Medicinal Marijuana. CANBERRA, Australia — Australian lawmakers committed on Wednesday to legalize the growing of marijuana for medical use within a part of the world renowned for zero-tolerance and harsh penalties for illegal drugs. 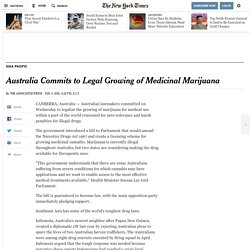 The government introduced a bill to Parliament that would amend the Narcotics Drugs Act 1967 and create a licensing scheme for growing medicinal cannabis. Marijuana is currently illegal throughout Australia, but two states are considering making the drug available for therapeutic uses. "This government understands that there are some Australians suffering from severe conditions for which cannabis may have applications and we want to enable access to the most effective medical treatments available," Health Minister Sussan Ley told Parliament. Are new laws leading more teens to smoke marijuana? Marijuana use is becoming more acceptable to Americans in general – and that includes teenagers. 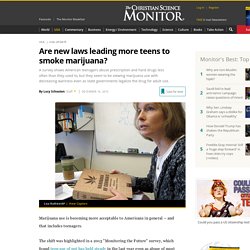 The shift was highlighted in a 2015 "Monitoring the Future" survey, which found teen use of pot has held steady in the last year even as abuse of most other drugs has declined among teens. Legal Marijuana Sales Hit $5.4 Billion in 2015, Report Says. Photo It’s not just heat lamps in closets and nickel bags anymore: Marijuana is getting some respect as legal sales take off.

This week two marijuana analysis and investment firms released a summary of a report that appeared to confirm that the industry has become a gold rush. National legal sales of cannabis grew to $5.4 billion in 2015, up from $4.6 billion in 2014, according to the firms, the ArcView Group, based in San Francisco, and New Frontier, based in Washington.

Demand is expected to remain strong this year, with a forecast of $6.7 billion in legal sales, the report said. Canada's new Liberal government repeats promise to legalize marijuana. Canada’s new Liberal government has repeated its pledge to legalize marijuana in a speech outlining its agenda as parliament resumes after the 19 October election. A speech delivered by governor general David Johnston reiterated new prime minister Justin Trudeau’s plan to legalize and regulate the recreational use of marijuana. It is a position Trudeau has held since becoming leader of the Liberal party in 2013. However, for the first time, the government said it will restrict access to marijuana but did not elaborate. Trudeau has said that legalizing marijuana would fix a “failed system” and help remove the “criminal element” linked to the drug.

He also has said Canadians would benefit from analyzing the experiences of Colorado and Washington state, which recently legalized pot. The speech also expanded on five themes that were central to the Liberals’ election victory, which ended the near-decade-long Conservation party’s reign. Trudeau’s Canada, Again. On Tuesday, Nov. 10, six days after Justin Trudeau, leader of the Liberal Party, was sworn in as prime minister of Canada, I was shown into his office on the third floor of the Parliament building in Ottawa.

A dark oak-paneled room, it contained a jumble of outsize furniture chosen by the previous occupant, Stephen Harper, whose Conservative Party was in power for a decade. The office had the air of a recently abandoned bunker — shelves bare, curtains drawn, personal effects hastily removed. Trudeau’s father, Pierre, occupied the same office for 16 years during the 1960s, ’70s and ’80s, and the new prime minister would shortly install his father’s old desk, a symbol of restoration but also an emphatic rejection of his predecessor. The squat, bulldoglike bureau left by the departing prime minister, Trudeau implied, was a reflection of Harper’s autocratic manner.

‘‘We’re going to move this place around,’’ Trudeau said. Mexico issues first permits for growing and possessing marijuana. MEXICO CITY -- The Mexican government granted the first permits allowing growing and possession of marijuana for personal use on Friday. The government's medical protection agency said the permits will apply only to the four plaintiffs who won a November Supreme Court ruling. The permits won't allow smoking marijuana in the presence of children or anyone who hasn't given consent.

The permits also don't allow the sale or distribution of the drug. The court's ruling doesn't imply a general legalization. But if the court rules the same way on five similar petitions, it would then establish the precedent to change the law and allow general recreational use. Dozens of people have since filed similar appeals to get such permits. Why Mexico's Supreme Court Declared Marijuana Use a Human Right. Last week, just a day after voters in Ohio rejected a constitutional amendment to legalize the recreational and medical use of marijuana, Mexico’s Supreme Court headed in a different direction: The country’s top justices concluded that national laws making it illegal to personally produce, possess, and consume marijuana violated the rights of Mexicans.

The ruling itself has received considerable attention, but the rationale behind it less so. The high court’s decision was based not on marijuana’s effects on public health or impact on incarceration rates, but on fundamental human rights. In that respect, it’s pretty precedent-setting globally. This particular case was brought by four members of the Mexican Society for Responsible and Tolerant Consumption (or SMART, in Spanish). Denver marijuana company recalls product, 13th recall in city in 13 weeks. Bernie Sanders Proposes Ending Federal Marijuana Ban. Marijuana breathalyzer test could be coming soon.

CBSNEWS - A new invention may soon make it easier for police who pull over risky drivers to test them for marijuana impairment on the spot, in addition to the usual alcohol breath test. A marijuana breathalyzer will begin clinical trials early next year, the Oakland, California-based Hound Labs Inc. announced this week. "The idea is that law enforcement will have one device out on the road to test for both THC [a marijuana component] and alcohol," said Hound Labs CEO and founder Dr. Mike Lynn, an emergency room physician at Highland Hospital, in Oakland. Typically, measuring the level of tetrahydrocannabinol (THC) -- the psychoactive component in cannabis that gives users a "high" -- is done using urine, blood, or saliva tests.

The results can show if marijuana has been used in recent days or weeks, but they are not a very accurate way to measure real-time impairment, said Lynn. Hound Labs has been collaborating with scientists at UC Berkeley to develop the technology. Marijuana momentum in Senate? Joint effort for reform adds GOPer. Nevada Republican Sen. Ohio Marijuana Legalization amendment certified. Senate Bill Would Effectively End The Federal War On Medical Marijuana. Colorado Supreme Court upholds firing of medical marijuana-smoking Dish employee.

DENVER — The Colorado Supreme Court affirmed Monday a lower courts’ rulings to uphold the firing of an employee for using medical marijuana while not on duty. The case involved Dish Network employee Brandon Coats, a quadriplegic who smoked marijuana at home to control seizures. Coats failed a random drug test in 2010 and Dish, citing its zero-tolerance policy of drug use, fired him. “If we’re going to allow people to smoke marijuana are we just not going to allow them to work?” Coats said. Medscape: Medscape Access. What is marijuana wax? 7 things you may not know about dabs, shatter and honey oil. Police and health officials warned last month about the dangers of marijuana wax, also known as honey oil, shatter and dabs. Legal Marijuana Sales Hit $5.4 Billion in 2015, Report Says. The academic consequences of marijuana use during college.

Smoking high-strength cannabis may damage nerve fibres in brain. High-strength cannabis may damage nerve fibres that handle the flow of messages across the two halves of the brain, scientists claim. Brain scans of people who regularly smoked strong skunk-like cannabis revealed subtle differences in the white matter that connects the left and right hemispheres and carries signals from one side of the brain to the other. The changes were not seen in those who never used cannabis or smoked only the less potent forms of the drug, the researchers found.

The study is thought to be the first to look at the effects of cannabis potency on brain structure, and suggests that greater use of skunk may cause more damage to the corpus callosum, making communications across the brain’s hemispheres less efficient. Paola Dazzan, a neurobiologist at the Institute of Psychiatry at King’s College London, said the effects appeared to be linked to the level of active ingredient, tetrahydrocannabinol (THC), in cannabis. Marijuana use doesn’t lower IQs of teens, study says. This is your brain — it looks just like your brain on weed. Marijuana doesn’t seem to have an effect on teenagers’ IQs, according to a new study. Twins study finds no evidence that marijuana lowers IQ in teens. NORML.org - Working to Reform Marijuana Laws. Afroman - Because I Got High.

Medical Use of Marijuana Doesn’t Increase Youths’ Use, Study Finds. Marijuana vs. Alcohol: Which Is Really Worse for Your Health? 20111027_MarijuanaLegalization-PR.pdf. Exclusive: Obama talks about pot - CNN Video. What marijuana really does to your brain. Delawareonline.com. Anti-Legalization Group Calls For Medical Marijuana Research Overhaul. Nancy Grace interview with Rapper "2 Chainz" #Pot2Blame. Smoking marijuana may cause early puberty and stunts growth in boys. Why Is It Called 4/20 Anyway? Charas Scientific -

Whole Town Gets High After Police Burn 1,000 Pounds of Seized Marijuana. Montevideo girl whose parents pushed for medical marijuana dies at age 8. HEALTH Marijuana Notes. A Photographer Addicted to Telling the Story of Marijuana. How does marijuana use affect your brain and body? Cannabis Anatomy: the Parts of the Plant - Leafly. Welcome.