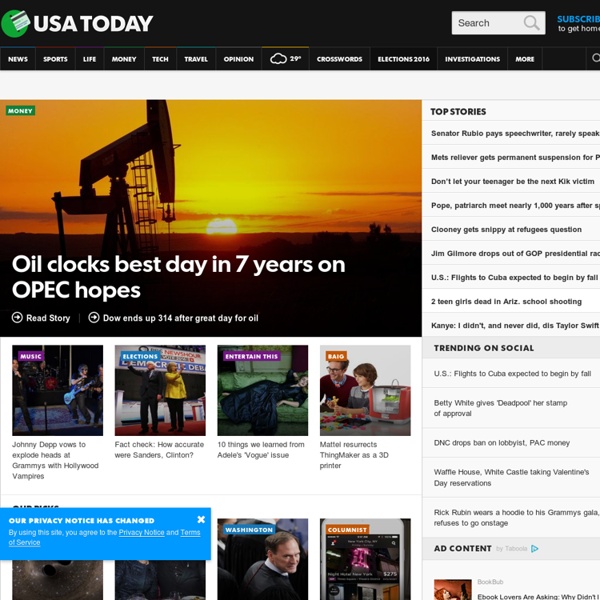 Russ Belville: Denver Rehab Businessman Fears Kids Will Inject Marijuana When you battle drug prohibitionists long enough you're bound to read some crazy things. The latest comes from a boardmember of Project SAM (Smart Approaches to Marijuana -- Kevin Sabet's anti-pot propaganda organ) named Dr. Christian Thurstone. In his latest blog screed entitled "Higher and Higher", he laments that the teenagers sentenced to his business, the largest rehab facility in Colorado, are testing with higher and higher levels of marijuana metabolites in their pee.

How Can Composers and Sound Designers Better Collaborate in Film? Sundance Institute and Skywalker Sound Have an Answer Skywalker Sound Through a new partnership, Sundance Institute and Skywalker Sound want to change the noisy conversation about music and sound design in film. Each year through their longstanding Composers Labs, Sundance invites young, gifted musicians who want to work in film composition to an intensive program facilitated by industry-established advisors (read the list of this year's composers and filmmakers here).

Rapper calls out Osteen, prosperity preachers Christian rapper Shai Linne of Lamp Mode Recordings released a song Friday that calls out prosperity gospel preachers by name, including Joel Osteen, Joyce Meyer, T.D. Jakes, and the entire Trinity Broadcasting Network. “I ain’t really trying to start beef, but some who claim to be part of his sheep got some sharp teeth,” he raps in “Fal$e Teacher$” (play below) before pointing to Matthew 7:16. Wild Weather Tied To Unusual Jet Stream Activity hide captionAn abandoned car lies off a road devastated by floodwaters along the South Platte River east of Greeley, Colo., on Sept. 17. John Wark/AP There has been a lot of extreme weather in the Northern Hemisphere this year, including the recent torrential rains in Colorado, flooding in Europe, bitter cold in Florida and a heat wave in Alaska. And scientists say all of it is related to some odd behavior by the powerful air currents called the polar jet stream. The jet stream is "this ribbon of very fast moving winds that's high over our heads," says Jennifer Francis, a research scientist at the Institute of Marine & Coastal Sciences at Rutgers University.

‘Tale of Sand’ Captures Two Harvey Awards This past Saturday night at the Harvey Awards ceremony held during Baltimore Comic-Con, it was announced that our hardcover original graphic novel, Jim Henson’s Tale of Sand, scored two awards: Best Original Graphic Album and Best Single Issue or Story! The Harvey Awards are one of the comic book industry’s oldest and most respected awards. The Harveys recognize outstanding achievements in over 20 categories, ranging from Best Artist to the Jack Kirby Hall of Fame. They are the only industry awards both nominated by and selected by the full body of comic book professionals.

Cannabis linked to prevention of diabetes - Health News - Health & Families Smoking cannabis may prevent the development of diabetes, one of the most rapidly rising chronic disorders in the world. If the link is proved, it could lead to the development of treatments based on the active ingredient of cannabis, tetrahydrocannabinol (THC), without its intoxicating effects. Researchers have found that regular users of the drug had lower levels of the hormone insulin after fasting – a signal that they are protected against diabetes. They also had reduced insulin resistance. Cannabis is widely smoked in the United States with over 17 million current users of whom more than four million smoke it on a daily basis. In the UK latest figures show 2.3 million people used cannabis in the last year, but the numbers have declined in the last decade.

HISS and a ROAR 3rd birthday: interview with Tim Prebble From today Tim launches a sale for HISS and a ROAR, offering a massive 50% discount for first week and 33% for second week. Use the discount code: MEOW. Good luck! Hi Tim, thanks for taking the time to talk to me. It’s the 2nd time we meet here: you were our first interview in english. It’s the birthday of HISS and a ROAR, I guess you have something to say about this amazing project. Hymn Stories: Rock of Ages Augustus Toplady was born in England in 1740. His father was a Royal Marine and died on duty soon after his son’s birth, leaving the boy to be raised by his mother. Toplady had an interest in religion during his younger years, and showed this in spiritual journals and moralistic behavior. However, it wasn’t until his fifteenth year, while attending a Methodist revival in an Irish barn, that he felt “brought nigh to God.” It was at this point that he determined to go into ministry. Having been converted under Methodism, Toplady initially aimed to become a Methodist minister.

Archaia Entertainment Dear Creator: Since our founding, one of Archaia’s core missions has been to publish artful, engaging, and groundbreaking graphical literature from both new and established creators. We have historically looked for work that tests the boundaries of the graphic novel medium, and continue to do so, by expanding our publishing mandate into illustrated prose as well. Submissions for graphic novels are more than welcome, and we will be looking for works that enthrall and excite us, that strike us as having a unique take or perspective on a medium, story, character, or genre.

Time to overturn the 1971 drugs law The UK government spends around 3 billion a year on its current drugs policy. We know from research, such as the recent report from the UK Drugs Policy Commission, that the war on drugs isnt working. Imagine if we spent this money on rehabilitation and prevention. As Ive said before, we need to develop a new approach that treats drugs as a public health issue, rather than a criminal one. We commend the government for commissioning a new study, which will send Jeremy Browne MP to Portugal and the US to investigate alternative approaches. This is an important step in the right direction. Sundance Institute Music and Sound Design Labs at Skywalker Sound In this exclusive SoundWorks Collection video we talk with Skywalker Sound's Director of Sound Design, Randy Thom and Sundance Institute, Director of the Film Music Program, Peter Golub about the two creative organizations effort to support independent filmmakers and sound designers. Sundance Institute and Skywalker Sound announced that the Sundance Institute Music and Sound Design Labs at Skywalker Sound will take place at Skywalker Ranch in 2013 and 2014 and also announced the artists that will participate in the 2013 Labs. This is the first time the two organizations will collaborate to support independent filmmakers and film composers and marks a significant expansion of the Institute's existing Composers Labs to include sound design.

We Watch and Are Watched In the late 18th century, philosopher Jeremy Bentham designed the panopticon. This was a new kind of prison that would allow every (“-pan”) prisoner to be under the gaze, or potential gaze (“opticon”) of a guard at all times. This prison would be circular and have the general appearance of a wheel. Cells were to be arrayed in tiers along the outer wall while the center, the spoke, would hold an inspection tower for the guards. Because one-way glass had not yet been invented, Bentham imagined various means through which the guards could conceal their presence.