Marijuana for Your ADHD Kid 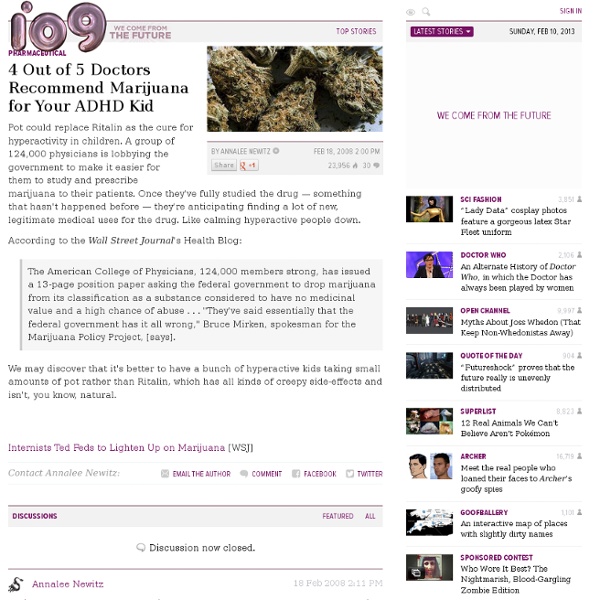 Cannabis: The Forbidden Medicine With Health Benefits You Will Not Hear About On The News You might think that if scientists found a cure to cancer it would be a HUGE STORY, right? It would make the top story during prime-time news of every major television network, as well as the headline of every newspaper across the country. The person who found the cure would be a hero and the world would be celebrating… Then why hasn’t that happened? A study done in Madrid, discovered that the cannabinoids in marijuana inhibit tumor growth. The presentation of cannabinoids, such as THC, CBD, CBN, etc…, promotes apoptosis killing off gliomas, leukemias, melanomas and other cancerous cell types; this is exactly what chemotherapies aim to do. “In 1974 the National Institute of Health ordered the Medical College of Virginia to find evidence that smoking cannabis damages the immune system. The sad part is that most Americans have never heard about the Madrid studies, and the story was only ran once by the Associated Press and the United Press International. Dr. Dr.

Seven Things You Didn't Know About Medical Marijuana Get Topic Updates Share Slideshow Written by Emily Lapkin and Medically Reviewed by Scott Pearlman, M.D. 1. Think you know it all about medical marijuana? Advertisement Prevention and treatment of powdery mildew on cannabis and marijuana Powdery mildew is one of the most widespread plant pests. It tends to affect flowering plants and fruit trees or bushes (roses, apple trees, etc.) as well as cannabis. The spores are in the air or on contaminated plants in the garden and can easily be drawn into your grow room by ventilators. In internet forums and cannabis cultivation books you may find lengthy lists of possible treatments that look temptingly promising for a complete recovery at all stages of mildew infestation. In warm, dry climate powdery mildew spreads widely. Powdery mildew can be detected by the white-coating on leaves and shoot tips, which succumb to the infestation by atrophy and eventually die. Mildew is a surprisingly aggressive fungus taking second place only to bud/grey mold (Botrytis). Photo 1: The first signs of powdery mildew are small circular white spots. Photo 2: As the infection progresses the mildew becomes more visible and covers the leaf surface. Avoid this sign when purchasing a fungicide! Neem oil

How to Grow Marijuana… What Should Your Medical Marijuana Plants’ Roots Grow In? When you look at the details on how to grow marijuana, you can get mighty confused about what your marijuana roots should grow in. Obviously they have to grow in a container, because they need to be in the dark, they need to be kept moist, they need to be fed, they need oxygen. But the choices for how you achieve the right place for your marijuana roots are many. Let’s line it out here… Soil: This seems like a simple, logical choice, but it’s not as simple as you might think, because most store-bought potting soil, even kind stuff like Fox Farm Ocean Forest, just isn’t nutritious enough for long enough to feed marijuana for maximum bud production. Using soil, you’ll get bloom phase potassium, calcium, magnesium, and phosphorus deficiencies unless you add fertilizer. Is there a “best” medical marijuana hydroponics growing medium or method? 14617 views | Share this article now with friends, co-workers and family Preview :

How to Open a Medical Marijuana Dispensary? Ask Stewart Richlin THC Gives Cancer Cells the Munchies Too : The Scientific Activist Through the results of widespread experimentation of the… well… let’s say “non-scientific” variety, it’s pretty well known that marijuana has the side effect of making the user very hungry. This is one of the many physiological effects of the active ingredient THC (?9-tetrahydrocannabinol). More relevantly, however, THC and other cannabinoids are actively being investigated for various useful clinical purposes, including the treatment of cancer through the inhibition of tumor growth. A new study by Salazar et al. in The Journal of Clinical Investigation demonstrates that THC causes tumor cells to begin to degrade themselves from the inside (a process called autophagy, i.e. “self-eating”). Despite the imagery that the title of this post (and maybe even casual experience) may imply, it’s not that THC causes cancer cells to ravenously and indiscriminately destroy themselves. Mostly, this is interesting (to me) more for the big picture aspect and the implications for clinical medicine.

What cannabis actually does to your brain Chances are they would've ended up brainless morons with or without the pot. It's quite frankly not strong enough of a narcotic to destroy one's life such as you describe. It's very dependent on the user's persona. @Tadashii: Are you also for alcohol and tobacco prohibition? Those ruin more lives every year then marijuana has ever. Wow- Tadashii, pot is not meth or cocaine. Yes, its a chemical that can intoxicate and has been embraced by, and been the cause of some lazy folks, underachievers, and Grateful Dead fans not amounting to much. Pot is like anything else- tobacco, alcohol, vicodin, valium, caffeine, etc. Cannabis has great promise for any treatment that requires appetite stimulant (such as cancer, HIV, etc), and has also been found to act as an anti-inflammatory or nausea reliever, Don't just stamp marijuana "evil". Do you enjoy any caffeinated sodas, cigarettes, or the occasional alcoholic beverage? Yes I am against alcohol too and I agree that it's worse than pot.

Israeli company grows medical marijuana which doesn't get you high Situated in an undisclosed location near Tzfat, northern Israel, is a government-approved medical marijuana plantation which was founded in 2004 by a retired biology teacher. Named Tikun Olam, the plantation has created a new cannabis strain which contains very low traces of tetrahydrocannabinol (THC), the main constituent in cannabis responsible for making people feel "stoned". By virtually eliminating THC in the new strain, Tikun Olam can now offer the drug's medicinal benefits to those patients who wish to keep a clear head. Marijuana contains over 60 constituents named cannabinoids and though THC is the most famous due to its psychoactive effects, another important constituent is cannabidiol (CBD). The new strain of marijuana created at Tikun Olam does just that. The promotional video below sheds more light on the Tikun Olam plantation. Source: Tikun-Olam , via: Reuters