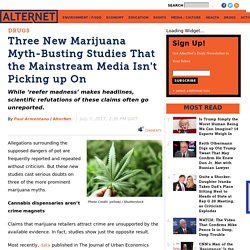 But these new studies cast serious doubts on three of the more prominent marijuana myths. Cannabis dispensaries aren’t crime magnets Claims that marijuana retailers attract crime are unsupported by the available evidence. In fact, studies show just the opposite result. Pharma Company Funding Anti-Pot Campaign, Admits to Govt that Legal Weed Kills Their Profit. Insys Therapeutics, the company who makes insane profits from a drug behind one of the worst overdose epidemics in the nation’s history, fentanyl, has donated $500,000 to a campaign opposing marijuana legalization in the US state of Arizona. 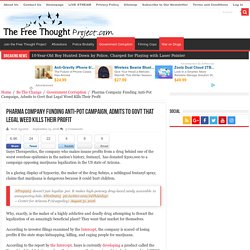 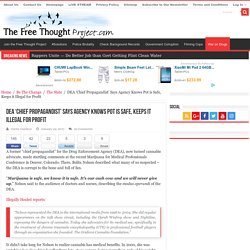 There, Belita Nelson described what many of us suspected – the DEA is corrupt to the bone and full of lies. “Marijuana is safe, we know it is safe. It’s our cash cow and we will never give up,” Nelson said to the audience of doctors and nurses, describing the modus operandi of the DEA. National Academy of Sciences Issues Landmark Statement on Medical Cannabis. Alex Pietrowski, Staff WriterWaking Times In 2016, the Drug Enforcement Administration of the United States issued a long-awaited decision on the medical benefits of cannabis, and instead of validating what millions of people already know to be true about this healing plant, the DEA chose to keep intact the 1970 designation of cannabis as a schedule I substance, a drug which has, as they claim, no medical benefit. 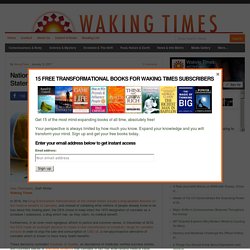 Furthermore, in an even more egregious affront to justice and common sense, in December of 2016, the DEA made an overnight decision to create a new classification of schedule I drugs for cannabis extracts in order to stop the sale and consumption of CBD oil, a non-psychoactive derivative of cannabis which is known to have many health benefits. These decisions contradict hundreds of studies, an abundance of medically verified success stories, and countless pieces of anecdotal evidence that cannabis in fact has wide-ranging medical value.

VIDEO: Step Inside a Real SWAT Team Pot Raid. Mansfield, OH — If a dozen men armed with assault rifles drove up to your house, smashed out your doors and windows, ransacked your belongings, and robbed you of your hard-earned money — this story would undoubtedly be on news channels across the country. 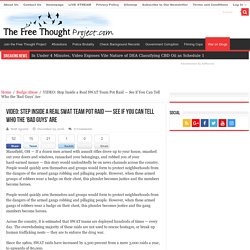 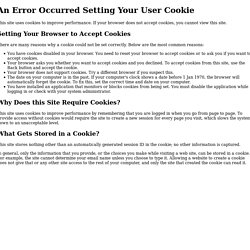 If your browser does not accept cookies, you cannot view this site. Setting Your Browser to Accept Cookies There are many reasons why a cookie could not be set correctly. Below are the most common reasons: You have cookies disabled in your browser. Why Does this Site Require Cookies? This site uses cookies to improve performance by remembering that you are logged in when you go from page to page. What Gets Stored in a Cookie? This site stores nothing other than an automatically generated session ID in the cookie; no other information is captured. BOMBSHELL: AAA Safety Foundation Finds No Scientific Basis that THC in Blood Impairs Driving.

By: Claire Bernish / (The Free Thought Project) No scientific basis exists to legitimize current THC testing in place in five states who base their impaired driving standards on THC levels in blood. 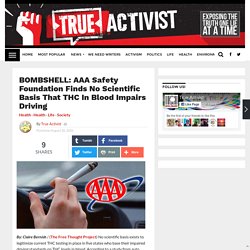 According to a study from auto club giant AAA’s safety foundation, a blood test threshold for THC — the chemical component of cannabis that makes people ‘high’ — is simply not scientifically possible. Yet, in five of six states where cannabis is legal, the tests are used to determine whether or not drivers should be considered impaired. WikiLeaks: Alcohol Industry Bribed Congress To Denounce Cannabis. Newly leaked information reveals that officials in some of the top alcohol companies in America spent money on persuading members of Congress to pay attention to the alleged problem of “marijuana-impaired driving. 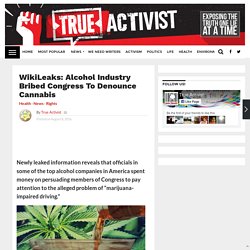 " Credit: High Times When one compares the effects of marijuana to alcohol, there really is no competition. To begin with, alcohol is responsible for approximately 88,000 deaths in the United States each year and marijuana 0. Legalizing "Weed" Has Done What 1 Trillion Dollars and a 40 Year War Couldn’t. By Nick Bernabe | Antimedia The $1 trillion War on Drugs launched by President Nixon in 1971 created the Mexican drug cartels, now legalizing weed is killing them. 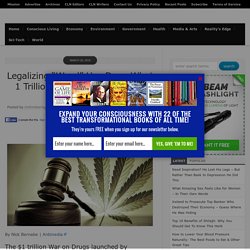 The Mexican drug cartels are finally meeting their match as a wave of cannabis legalization efforts drastically reshapes the drug trafficking landscape in the United States. It turns out that as states legalize cannabis use and cultivation, the volume of weed brought across the border by Mexican drug cartels dramatically decreases — and is putting a dent in their cash flow. A newly-released statistical report from the U.S. Border Patrol shows a sharp drop-off in cannabis captured at the border between the United States and Mexico. HEALTH FREEDOM ALERT: The FDA just outlawed CBDs and hemp oil extracts by claiming all plant molecules now belong exclusively to Big Pharma.

Why Is Marijuana Outlawed? The Real Reasons Are Worse Than You Think. To understand how cannabis became so stigmatized, you have to understand something about a plant that is very similar to cannabis but different enough that making it illegal would be preposterous: hemp. 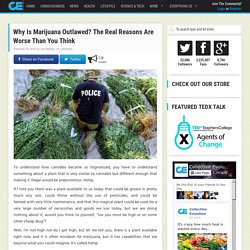 Virginia Votes Unanimously to Legalize Hemp Farming, Nullifying Federal Law. By Michael Boldin | Activist Post Today, the Virginia House of Delegates passed a bill to authorize the farming, and production of industrial hemp in the state for commercial purposes, setting the foundation to nullify in practice the unconstitutional federal prohibition on the same. The vote was 98-0. Introduced by Del. Brenda Pogge (R-Norge), House Bill 699 (HB699) would amend current state law on hemp by removing a provision that authorized the licensing of hemp farming only upon approval of the federal government. As noted in the impact statement from the Department of Planning and Budget, the bill would also require the Board of Agriculture and Consumer Services to “adopt regulations as necessary to license persons to grow and process industrial hemp for any purpose.”

Henry Ford’s Suppressed Hemp Car. We might think that our ethanol and biodiesel “flex-fuel” systems are all very cutting edge, but biofuel development is of course nothing new. Way back in the 1930’s, Henry Ford was hard at work in the alt-fuels sector, and in 1941 he constructed a hemp-fueled and hemp-bodied prototype car. The “plastic” body panels were composed of 70% cellulose fibers, including industrial hemp, mixed with a resin binder, and apparently they were pretty sturdy.