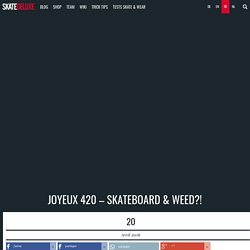 Planer avec Antwuan Dixon. World's first cannabis gym that lets members work out stoned to open in San Francisco. Jim McAlpine, founder of Power Plant Fitness gym, said he hopes the center will help to dispel the image of the lazy stoner From protein shakes to energy drinks, athletes have all sorts of substances they take both before and after workouts to boost their performance. 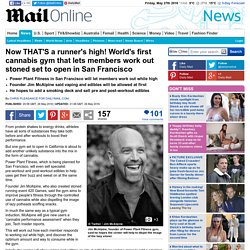 But one gym set to open in California is about to add another unlikely substance into the mix in the form of cannabis. Power Plant Fitness, which is being planned for San Francisco, will even sell specialist pre-workout and post-workout edibles to help uses get their buzz and sweat on at the same time. Founder Jim McAlpine, who also created stoned running event 420 Games, said the gym aims to improve people's fitness through the controlled use of cannabis while also dispelling the image of lazy potheads scoffing snacks. World's first cannabis gym that lets members work out stoned to open in San Francisco. Jockey Chris Johnson could face months on the sidelines over failed cannabis test. Last updated 17:38, May 27 2016 Chris Johnson has been stood down following a "non- negative" test to cannabis. 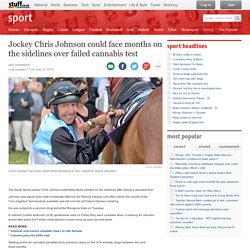 Top South Island jockey Chris Johnson potentially faces months on the sidelines after failing a cannabis test. Johnson was stood down with immediate effect by the Racing Integrity Unit (RIU) when the results of the "non-negative" test became available and did not ride at Friday's Oamaru meeting. He was subject to a random drug test at the Rangiora trials on Tuesday. A Judicial Control Authority (JCA) spokesman said on Friday they were unaware when a hearing for Johnson would take place but Fairfax understands it could come as soon as next week. Why Marijuana And Snowboarding Are A Natural Match. The cannabis and snowboarding communities have always been intertwined in some way. 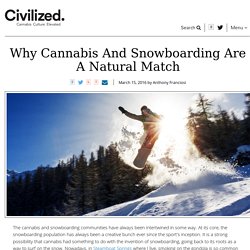 At its core, the snowboarding population has always been a creative bunch ever since the sport's inception. It is a strong possibility that cannabis had something to do with the invention of snowboarding, going back to its roots as a way to surf on the snow. Nowadays, in Steamboat Springs where I live, smoking on the gondola is so common that the attendant at the top has Febreze handy to spray around the gondola whenever they suspect someone has been smoking! Snowboarders use marijuana for a multitude of different aspects related to snowboarding.

It can be a great pain reliever for people with foot, ankle, or knee pain, which are common problems for long-time snowboarders. Get High, Train Harder - Marijuana as a Performance-Enhancing Drug. Four to six times a week, elite triathlete Clifford Drusinsky wakes up at 3 AM to train. 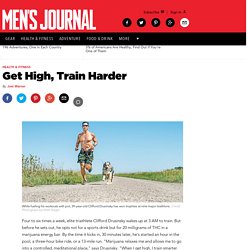 But before he sets out, he opts not for a sports drink but for 20 milligrams of THC in a marijuana energy bar. By the time it kicks in, 30 minutes later, he's started an hour in the pool, a three-hour bike ride, or a 13-mile run. "Marijuana relaxes me and allows me to go into a controlled, meditational place," says Drusinsky. "When I get high, I train smarter and focus on form. " Weed Kit Built for Cannabis Adventurers: Skiing Field Test. VIDEO: Tanner Hall Newest Sponsor Is All About The WEED. By: Francis Xavier | February 4, 2016 “Our brand is focused on debunking the lazy stoner stereotype and Tanner has been poking holes in that misconception for decades.” 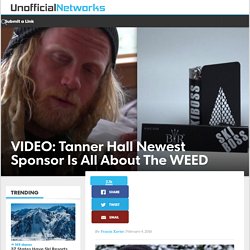 If you haven’t heard, Tanner Hall isn’t shy about his marijuana intake and now he has a new sponsor that caters to his preferences when getting heady in the woods: “Black Rock Originals, the cannabis industry’s premier brand for cannabis adventurers, is pleased to announce the sponsorship of legendary professional skier Tanner Hall. What Roger Goodell Doesn’t Get About Cannabis in the NFL - Reefer Fitness. No matter how hard Roger Goodell tries, the issue of players’ use of marijuana as an acceptable form of pain relief remains in the forefront of public scrutiny of the NFL. 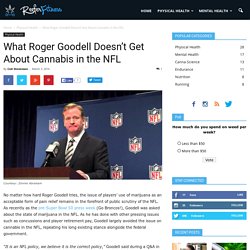 As recently as the pre-Super Bowl 50 press week (Go Broncos!) , Goodell was asked about the state of marijuana in the NFL. As he has done with other pressing issues such as concussions and player retirement pay, Goodell largely avoided the issue on cannabis in the NFL, repeating his long existing stance alongside the federal government. Ricky Williams recommends NFL players use marijuana for pain. Jeffrey Phelps/AP Former NFL running back Ricky Williams says he believes marijuana has medical benefits and can help ease the physical pain that comes with playing the game of football. 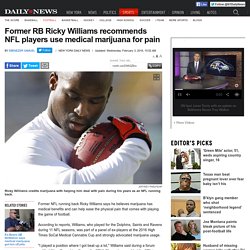 According to reports, Williams, who played for the Dolphins, Saints and Ravens during 11 NFL seasons, was part of a panel of ex-players at the 2016 High Times SoCal Medical Cannabis Cup and strongly advocated marijuana usage. Series: Real Sports With Bryant Gumbel: Ep. 202: Marijuana Use in the NFL and videos including episode recaps, previews & clips on HBO.com. HBO Online. Medical Marijuana and Football. Works Even When Opiates Don't The great utility of medical cannabis is, in part, the remarkable safety of the medicine and lack of serious side effects; the other is the unique breadth of its therapeutic actions. 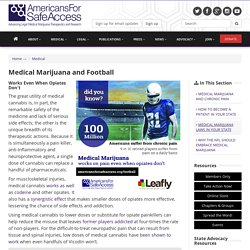 Because it is simultaneously a pain killer, anti-inflammatory and neuroprotective agent, a single dose of cannabis can replace a handful of pharmaceuticals. For muscloskeletal injuries, medical cannabis works as well as codeine and other opiates. It also has a synergistic effect that makes smaller doses of opiates more effective, lessening the chance of side effects and addiction. Using medical cannabis to lower doses or substitute for opiate painkillers can help reduce the misuse that leaves former players addicted at four-times the rate of non-players. In January, HBO's "Real Sports with Bryant Gumbel" reported that an estimated 50-60 percent of NFL players regularly use marijuana, many for pain management. 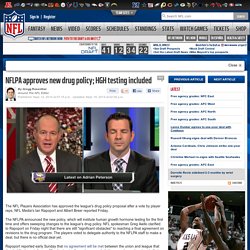 The NFLPA announced the new policy, which will institute human growth hormone testing for the first time and offers sweeping changes to the league's drug policy. NFL spokesman Greg Aiello clarified to Rapoport on Friday night that there are still "significant obstacles" to reaching a final agreement on revisions to the drug program. The players voted to delegate authority to the NFLPA staff to make a deal, but there is no official deal yet. Nick Diaz's five-year ban for weed is master stroke of outdated thinking. Back in 2009, Nick Diaz told the LA Times his method for avoiding positive marijuana tests despite frequently smoking weed and listening to jams. “I can pass a drug test in eight days with herbal cleansers. I drink 10lbs of water and sweat out 10lbs of water every day. I’ll be fine.” Unpleasant as it sounds, this method has proven 90% effective for generations of high school kids, job applicants, and people on probation.

Uncle Spliffy® Sports Cannabis™ Un ancien de la NBA assure que 80% des joueurs consomment de la marijuana. BASKET Tout en estimant que l’institution doit évoluer dans son approche de la substance… Publié le Mis à jour le La NBA doit-elle évoluer sur le sujet de la marijuana ? 'Uncle Spliffy' Seeks To Change Negative Perceptions About Cannabis And Sports. Late last year I bumped into former NBA player Cliff Robinson at the airport in Portland, Oregon. Jay and I were on our way to Vegas to attend the Marijuana Business Conference there, and Cliff Robinson was on our flight. Cannabis and sport. Cannabis is the most widely used illicit drug in the Western world and, correspondingly, is frequently detected via urine testing1,2 in the workplace and in competitive sport.3Urine testing in the workplace is conducted under the assumption that the substance in question reduces productivity and increases risk of workplace accidents (thus is an ‘ergolytic’ drug).4 However, urine testing in competitive sport is conducted under the assumption that the substance in question unfairly increases performance (thus is an ‘ergogenic’ drug).5 This begs the question, what role does cannabis really play in competitive sports?

Fly way to grind up some chronic. Clifford Robinson (@UncleCliffy30) Athletes who say cannabis enhances performance hope the marijuana revolution comes to sports. These famous athletes are advocating for marijuana as a workout tool. The District recently marked the first anniversary of its legalization of recreational marijuana. And as the city is home to so many fitness-minded people, it’s likely that at least a few of them are wondering whether it makes sense, or whether it’s even safe, to incorporate pot into their exercise regimens.

Given the long-standing illegality of marijuana, there is not a large body of evidence about its effects on the human body. However, I spoke with a professional athlete who offered his own large body as testimony to the benefits of engaging in physical activity while stoned. Activity hardly gets more physical — and grueling — than professional wrestling, and at 45, Rob Van Dam not only has been at it for well over two decades, he has performed at the highest level it has to offer. Ross' Gold - We've got what you need. Carving on Cannabis with a Snowboard Gold Medalist: FUEL. Pourquoi le cannabis est-il considéré comme un dopant?