Cannabis Growing Forum & Cannabis & Marijuana Discussion Forums. Bhang. This article is about a preparation of cannabis leaves and flowers. 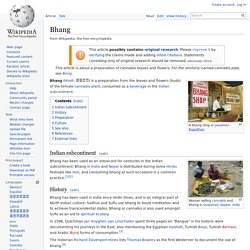 For the similarly-named cannabis pipe, see Bong. Bhang (Hindi: भाँग) is a preparation from the leaves and flowers (buds) of the female cannabis plant, consumed as a beverage in the Indian subcontinent. Indian subcontinent[edit] Bhang has been used as an intoxicant for centuries in the Indian subcontinent. Bhang in India and Nepal is distributed during some Hindu festivals like Holi, and consuming bhang at such occasions is a common practice.[1][2] Seattle police cure munchies with Doritos at city's Hempfest. Seattle police give away 1,000 bags of Doritos with advice about smoking pot on them"Don't drive while high" and "Don't use pot in public," the bags read"We knew if we did leaflets, it would turn into litter," one sergeant saysThe cops ran out of Doritos in less than 30 minutes at Seattle's Hempfest (CNN) -- When Seattle pot smokers got the munchies this weekend, the cops had their back. 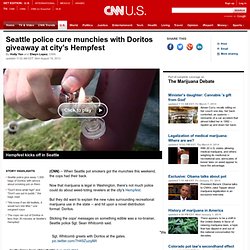 Now that marijuana is legal in Washington, there's not much police could do about weed-toting revelers at the city's Hempfest. But they did want to explain the new rules surrounding recreational marijuana use in the state -- and hit upon a novel distribution format: Doritos. Marijuana Inc Documentary part 1. Mile High Marijuana Summit - Rick Doblin, Ph.D. Strain Hunters Swaziland Expedition. 420RADIO.org. The Truth About Hair and why Native/Indians would keep their hair long. Reported by C. 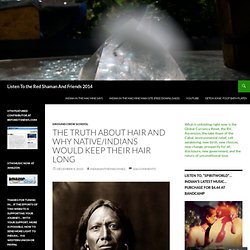 Young This information about hair has been hidden from the public since the Viet Nam War . Our culture leads people to believe that hair style is a matter of personal preference, that hair style is a matter of fashion and/or convenience, and that how people wear their hair is simply a cosmetic issue. Back in the Viet Nam war however, an entirely different picture emerged, one that has been carefully covered up and hidden from public view. In the early nineties, Sally [name changed to protect privacy] was married to a licensed psychologist who worked at a VA Medical hospital. Strain Hunters India Expedition (FULL HD MOVIE)

Strain Hunters Morocco Expedition by Green House Seed Co. What would you do if this was your daughter or wife? Bradford father Colin Berry died in front of his daughter 'after gun went off during police home raid' Hemp / Cannabis. Marijuana. Nativeokie. Cannabis - THC. Terrence McKenna - View on Cannabis. Marijuana and the Bible. Top 10 Cannabis Studies the Government Wished it Had Never Funded. Monsanto, and GMO Terminator Cannabis. Jul-18-2011 17:58 Salem-News.com Now Monsanto wants to control and genetically modify your pot seeds... 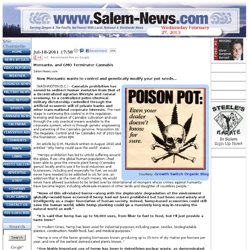 (WASHINGTON D.C.) - Cannabis prohibition has served to redirect human evolution from that of a decentralized agrarian lifestyle and natural economy, to a centralized petro-chemical military dictatorship controlled through the artificial economic will of private banks and other trans-national corporate interests. The next stage in continuing this control is in the regulation, licensing and taxation of Cannabis cultivation and use through the only practical means available to the corporate system, which is through genetic engineering and patenting of the Cannabis genome. Proposition 19: The Regulate, Control and Tax Cannabis Act of 2010 lays the foundation, writes RJM. An article by D.M. “Hemps prohibition has led to untold suffering around the globe. “It is said that hemp has up to 50,000 uses, from fiber to fuel to food, but I’ll just provide a taste here:”

125 Year Old Pot Smoker Claims Weed Was Her Secret To Longevity. (Before It's News) A 125-year-old woman, said to be one of the oldest women in India, died at her home in Orissa, her family said Sunday. 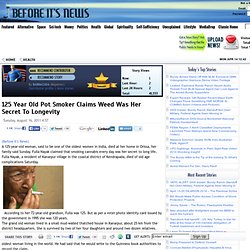 Fulla Nayak claimed that smoking cannabis every day was her secret to long life. Fulla Nayak, a resident of Kanarpur village in the coastal district of Kendrapada, died of old age complications Saturday. According to her 72-year-old grandson, Fulla was 125. But as per a voter photo identity card issued by the government in 1995 she was 120 years. The grand old woman lived in a small mud-walled thatched house in Kanarpur, about 25 km from the district headquarters.

Her eldest daughter, Jamuna, 92, lives in the same village. Fulla was in the news when her grandson Narayan Nayak claimed last week that she could be the oldest woman living in the world. Fulla was known for her love of smoking ganja and cigars and palm juice. She had never suffered any debilitating ailment throughout her life. 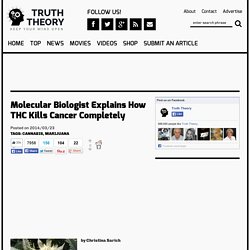