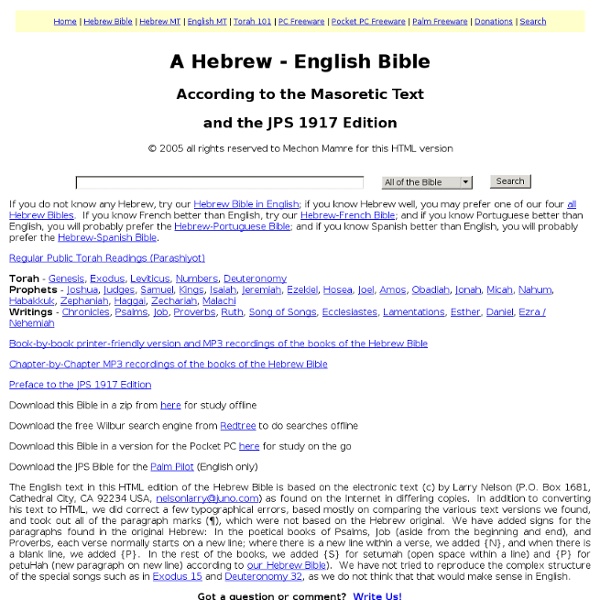 According to the Masoretic Text and the JPS 1917 Edition © 2005 all rights reserved to Mechon Mamre for this HTML version If you do not know any Hebrew, try our Hebrew Bible in English; if you know Hebrew well, you may prefer one of our four all Hebrew Bibles. If you know French better than English, try our Hebrew-French Bible; and if you know Portuguese better than English, you will probably prefer the Hebrew-Portuguese Bible; and if you know Spanish better than English, you will probably prefer the Hebrew-Spanish Bible. Regular Public Torah Readings (Parashiyot) Torah - Genesis, Exodus, Leviticus, Numbers, Deuteronomy Prophets - Joshua, Judges, Samuel, Kings, Isaiah, Jeremiah, Ezekiel, Hosea, Joel, Amos, Obadiah, Jonah, Micah, Nahum, Habakkuk, Zephaniah, Haggai, Zechariah, Malachi Writings - Chronicles, Psalms, Job, Proverbs, Ruth, Song of Songs, Ecclesiastes, Lamentations, Esther, Daniel, Ezra / Nehemiah Chapter-by-Chapter MP3 recordings of the books of the Hebrew Bible

Hebrew Glossary Then name Ashkenaz (Bereishit 10:3) has since the 10th century been identified with Germany. As the German and French Jews of the medieval period formed a uniform group in culture and religious customs, they were all referred to as Ashkenazim in contradistinction to the Sefardim or Spanish- Portuguese Jews. Ashkenazim are the people who use Nusach Ashkenaz, the prayer arrangement adopted by the medieval Franco-German Jews, including certain variations described as belonging to the Polish custom (Minhag Polin). In the 18th century, the Chasidic movement adopted the Sefardic arrangement of prayers; hence, the Chasidim have been called Sefardim on many occasions. The Ashkenazim in Eastern Europe developed an intense religious life, disseminating Talmudic scholarship among the people to a degree never before surpassed in Jewish history. A high Jewish literacy existed in an illiterate non-Jewish environment.

Hebrew Lexicon The Old Testament Hebrew lexicon is Brown, Driver, Briggs, Gesenius Lexicon; this is keyed to the "Theological Word Book of the Old Testament." Also included are pronunciations of each word with alternate pronunciations if available. Bible Study Tools offers two Bible versions, King James and New American Standard, for studying within the Old Testament lexicons. NOTE: In order to see the actual Greek and Hebrew characters you must download and install the free BST Fonts. The Visual Bible USA  Buy Acts of the Apostles DVD movie $14.95 Acts of The Apostles DVD from GNN USA now only $14.95 Join with the physician Luke (Dean Jones), as he tells the enthralling story of danger, struggles and triumph that marks the birth of the Christian church. More > The Visual Bible lends itself beautifully to DVD technology. In addition to the superior format, you have multiple viewing options which include:

Antiquities of the Jews by Flavius Josephus This work was translated by William Whiston and edited by the folks at Sage Software, who offer these works, as well as hundreds of ancient and modern authors, on CD from (I am not associated with Sage Software, but left the plug for their CD in place because it is from their production of the text that my work here is based.) HTML conversion was performed from RTF and Microsoft Word sources locally. Preface Book I Israelites Came to Ancient Japan Ark of the covenant of (left) and "Omikoshi" ark of (right) Dear friends in the world, I am a Japanese Christian writer living in .

Bibles The Bible and the codex initially took shape within a Roman Empire that stretched from Syria to Scotland. Greek and Latin were the literary languages, and by fourth century Christianity was the state religion. In the early Middle Ages individual nations began to emerge, with their own languages, cultures, and religious traditions—orthodox Christian, heretical, and pagan—all influencing the ways in which Bible and book were perceived and produced. Still, the concept of "empire" continued to haunt ambitious leaders who saw faith as a way to unite their diverse subjects. Disseminating a religion of the Word involved both finding interpreters to preach in local languages and teaching people sufficient literacy for reading and copying texts. Missionaries often used a written version of the spoken language while different sounds required the creation of suitable scripts.