The Truth About Death

Testimony from an Ex Satanist! What satan DOES NOT! want you to know!!! Are the Dead Really Dead? The Witch of Endor. Deadly Delusions. Confusion in the Cemetery. Spirits of the Dead. Do They Speak and Hear? 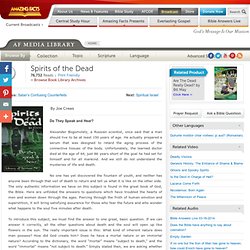 Alexander Bogomoletz, a Russian scientist, once said that a man should live to be at least 150 years of age. He actually prepared a serum that was designed to retard the aging process of the connective tissues of the body. Unfortunately, the learned doctor died at the age of 64, just 86 years short of the goal he had set for himself and for all mankind. And we still do not understand the mysteries of life and death. No one has yet discovered the fountain of youth, and neither has anyone been through that veil of death to return and tell us what it is like on the other side. To introduce this subject, we must find the answer to one great, basic question. The answer to this significant question is found in Job 4:17, “Shall mortal man be more just than God? The human family was not invested with a natural immortality. Absent From The Body. Introduction Clergy and laity alike have often stumbled over some of the writings of Paul the Apostle. 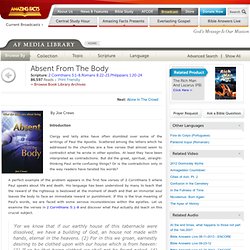 Scattered among the letters which he addressed to the churches are a few verses that almost seem to contradict what he wrote in other epistles. At least they have been interpreted as contradictions. But did the great, spiritual, straight-thinking Paul write confusing things? Or is the contradiction only in the way readers have twisted his words? A perfect example of the problem appears in the first few verses of 2 Corinthians 5 where Paul speaks about life and death. In order to get the picture clearly in mind, let us review the verses point by point. Vs. 1 Paul introduces an earthly house and a heavenly house, and says: “For we know that if our earthly house of this tabernacle were dissolved, we have a building of God, an house not made with hands, eternal in the heavens.”

The Witch of Endor. King Saul was at his wit's end and trembling with fear. 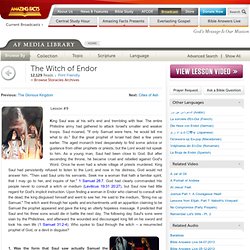 The entire Philistine army had gathered to attack Israel's smaller and weaker troops. Saul moaned, "If only Samuel were here, he would tell me what to do. " But the great prophet of Israel had died a few years earlier. The aged monarch tried desperately to find some advice or guidance from other prophets or priests, but the Lord would not speak to him. As a young man, Saul had been close to God. 1. 1 Kings 22:22. Revelation 16:14 For they are the spirits of devils, working miracles. Answer : ____________________ 2. Job 14:21. Ecclesiastes 9:5, 6, 10 The dead know not any thing, neither have they any more a reward; for the memory of them is forgotten.

NOTE: No! Are The Dead Really Dead? Lesson 10 Death just might be one of the most misunderstood subjects today. 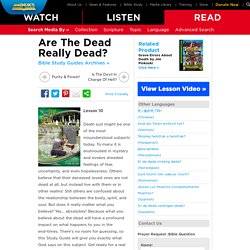 To many it is enshrouded in mystery and evokes dreaded feelings of fear, uncertainty, and even hopelessness. Immortality: Conditional or Innate? Immortality: by Bob Pickle Preface This paper is a collection of texts which, taken at face value with no alteration of the meaning of the English words used, indicate that immortality is conditional. 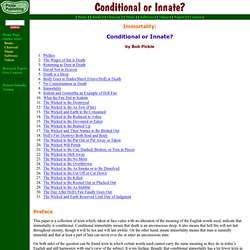 Conditional immortality means that death is an unconscious sleep. It also means that hell fire will not last throughout eternity, though it will be hot and will last awhile. On both sides of the question can be found texts in which certain words used cannot carry the same meaning as they do in today’s English and still harmonize with one’s view of the subject. To me the most disturbing redefinition is the one for "eternal life. " The texts that, taken at face value, support conditional immortality are listed below. Many who believe in innate immortality describe man as a triune being: body, soul, and spirit. "The spirit shall return to God who gave it" (Eccl. 12:7). Those who hold to innate immortality often refer to Luke 16. 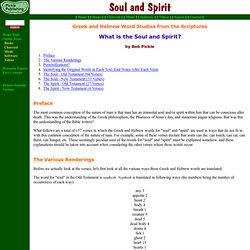 Heresy. The Catholic View Lateran Council of 1513 "Whereas some have dared to assert concerning the nature of the reasonable soul that it is mortal, we, with the approbation of the sacred council do condemn and reprobate all those who assert that the intellectual soul is mortal, seeing, according to the canon of Pope Clement V, that the soul is [...] immortal [...] and we decree that all who adhere to like erroneous assertions shall be shunned and punished as heretics. 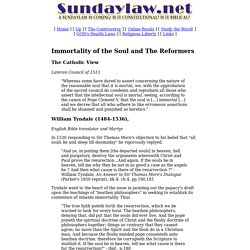 " William Tyndale (1484-1536), English Bible translator and Martyr In 1530 responding to Sir Thomas More's objection to his belief that "all souls lie and sleep till doomsday" he vigorously replyed. "And ye, in putting them [the departed souls] in heaven, hell and purgatory, destroy the arguments wherewith Christ and Paul prove the resurection...And again, if the souls be in heaven, tell me why they be not in as good a case as the angels be ? "The true faith puteth forth the resurrection, which we be warned to look for every hour. Mary English. Are Ghosts Real? The Truth About Ghosts. The Truth About Death. 222 - The Mystic Realm Of Death. Doctrines That Divide: The Afterlife (Part 5 of Series)- (Doug Batchelor) AmazingFacts © Death - Truth About Death.