H. Spurgeon (1834–1892) is one of the church’s most famous preachers and Christianity’s most prolific writers. He converted to Christianity in 1850 at a small Methodist chapel and began his own ministry immediately, preaching more than 500 sermons by the age of 20. God in a Nutshell project. NOAH: the TRUTH is BIGGER than you thought......the JourNey BeGins. Categories. A Woman Rides The Beast. The Book of Enoch - Entire Book, R. H. Charles Version (Synchronized Text) AGENDA_ Grinding America Down (Full Movie) - Download - 4shared - Rick Bulow. ReasonableFaith.org – Defend Biblical Christianity, Apologetics, Bible Questions. END TIME HEADLINES. About END TIME HEADLINES End Time Headlines is a ministry created to provide resources to equip believers and to inform the discerning of the "Signs and Seasons" in which we are in. 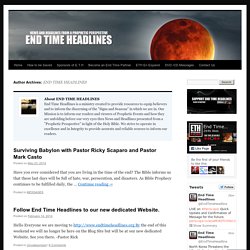 Our Mission is to inform our readers and viewers of Prophetic Events and how they are unfolding before our very eyes thru News and Headlines presented from a "Prophetic Prospective" in light of the Holy Bible. We strive to operate in excellence and in Integrity to provide accurate and reliable sources to inform our readers. Surviving Babylon with Pastor Ricky Scaparo and Pastor Mark Casto. End Time Headlines. Ray Comfort's Daily Evidence. Prophecy of the Popes. Final part of the prophecies in Lignum Vitæ (1595), p. 311 The prophecies conclude with a pope identified as "Peter the Roman", whose pontificate will allegedly bring the destruction of the city of Rome.[3] History[edit] 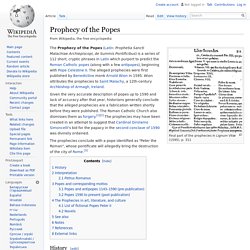 Petrus Romanus: The Final Pope and the Antichrist Are Here. The Daniel Comparison. Although this post isn't part of the Revelation Series that we've been covering in class, I thought it would be a good time to add it to the mix because of recent events in the Middle East. 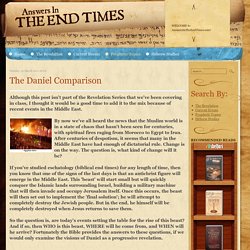 By now we’ve all heard the news that the Muslim world is in a state of chaos that hasn't been seen for centuries, with spiritual fires raging from Morocco to Egypt to Iran. Institute for Biblical Studies - (OnenessPentecostal.com) Archaeologists Unearth Proof of Plot to Kill Prophet Jeremiah - Haaretz. Israeli archaeologists have unearthed a seal impression belonging to a minister of the biblical King Zedekiah, which dates back 2,600 years, during an archeological dig in Jerusalem's ancient City of David. 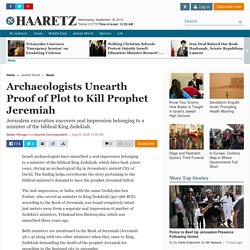 The finding helps corroborate the story pertaining to the biblical minister's demand to have the prophet Jeremiah killed. The seal impression, or bulla, with the name Gedalyahu ben Pashur, who served as minister to King Zedekiah (597-586 BCE) according to the Book of Jeremiah, was found completely intact just meters away from a separate seal impression of another of Zedekia's ministers, Yehukual ben Shelemyahu, which was unearthed three years ago. Hope of the World. Receive specials from Jonathan, including prophecy updates, news behind the news, what to be aware of and watch out for as an end time believer, Special teachings & words to strengthen and encourage you in your walk, updates on the Great Commission, the newest messages, and more! 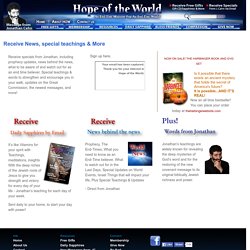 Is it possible that there exists an ancient mystery that holds the secret of America's future? It is possible...AND IT'S REAL! It’s like Vitamins for your spirit with Teachings, meditations, insights With the deep riches of the Jewish roots of Jesus to give you strength and victory for every day of your life - Jonathan’s teaching for each day of your week. Sent daily to your home, to start your day with power! Prophecy, The End-Times, What you need to know as an End-Time believer, What to watch out for in the Last Days, Special Updates on World Events, Israel Things that will impact your life, Plus Special Teachings & Updates - Direct from Jonathan. 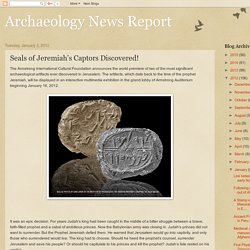 The artifacts, which date back to the time of the prophet Jeremiah, will be displayed in an interactive multimedia exhibition in the grand lobby of Armstrong Auditorium beginning January 16, 2012. It was an epic decision. For years Judah’s king had been caught in the middle of a bitter struggle between a brave, faith-filled prophet and a cabal of ambitious princes. Now the Babylonian army was closing in. Judah’s princes did not want to surrender. What does the Bible say about praying for the dead? Free Christian eCards - eMail Greeting Cards Online. Who Is "Taken" at the Second Coming? 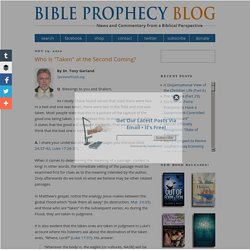 Tony Garland SpiritandTruth.org Q. Blessings to you and Shalom, As I study I have found verses that state there were two in a bed and one was taken, there were two in the field and one was taken. Most people state that this is a picture of the rapture of the good one being taken. A. When it comes to determining the meaning of a passage, context is king!

The Israel Connection: Answer to: Those who Bless/Curse Israel will be Blessed/Cursed. I was led to another website where the author debunked the bless/curse Israel promise that Christians point to today. 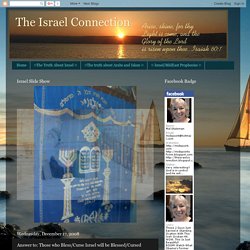 I think this is important enough to answer:Here's what this person says: "In Genesis 12:3, God said to Abraham, I will bless them that bless you, and curse him that curses you, and in you shall all the families of the earth be blessed. Notice, the direct "bless-curse" line concerned Abraham alone, not Israel, and "all the families of the earth" were to be blessed in Abraham, which meant through "his seed," which was Jesus Christ (see Galatians 3:16). In order to receive that very blessing, individuals must be willing to be "turned away" from their sins by God's grace (see Acts 3:25,26). " However, if you read just a bit more in Genesis 27:29, you will find that Issac blesses Jacob with this: "Cursed be everyone who curses you, and blessed be those who bless you.

" Jacob was Abraham's seed through Issac!! Archaeologists Unearth Proof of Plot to Kill Prophet Jeremiah - Haaretz. The Christ consciousness - Charlie Shamp from Destiny Encounters on podbay. Even the very elect. In the following video, technology is shown that can make you believe you are witnessing “miraculous” events. 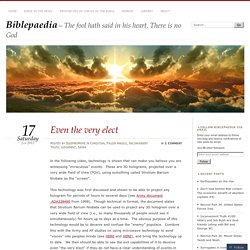 These are 3D holograms, projected over a very wide Field of View (FOV), using something called Strotium Barium Niobate as the “screen”. This technology was first discussed and shown to be able to project any hologram for periods of hours to several days (see Army document ADA338490 from 1998). Though technical in format, the document states that Strotium Barium Niobate can be used to project any 3D hologram over a very wide field of view (i.e., so many thousands of people would see it simultaneously) for hours up to days at a time. The obvious purpose of this technology would be to deceive and confuse the “enemy” populace. Combine this with the Army and AF studies on using microwave technology to send “voices” into peoples minds (see HERE and HERE), and bring the technology up to date.

Will Satan and his personification the AntiChrist, use this technology? Nature of god - What is the relationship between God the Father and the Holy Spirit? - Christianity Stack Exchange. 1Jn 5:7 For there are three that bear record in heaven, the Father, the Word, and the Holy Ghost: and these three are one. Mat 28:19 Go ye therefore, and teach all nations, baptizing them in the name of the Father, and of the Son, and of the Holy Ghost: Act 10:38 How God anointed Jesus of Nazareth with the Holy Ghost and with power: who went about doing good, and healing all that were oppressed of the devil; for God was with him. Let me introduce you to God as described in the New Testament by Jesus through John and Paul. So to start briefly with 1st John 5 and Acts 10.

The Cutting Edge - Spiritual Insights Into The New World Order So Startling You'll Never Look At The News The Same Way Again. BIRTH PANGS FOR 4/10/2015: ALL END TIME NEWS COMPILED INTO ONE REPORT. Spiritual Warfare: Knowing Your Enemy. Know Your Enemy (Spiritual Warfare) The following is given in a Bible Study/notes format. You may wish follow the Spiritual Warfare general outline. A. Where did he come from? Genesis 1:1, Exodus 20:11, Nehemiah 9:6, Colossians 1:16 First, we should see that God was in the beginning, not Satan.

A Woman Rides the Beast - A City on Seven Hills. Who is theWoman Who Rides The Beast in Revelation 17? Virtually all attention these days is focused on the coming Antichrist — but he is only half the story. Many are amazed to discover in Revelation 17 that there is also another mysterious character in the heart of prophecy — a woman who rides the beast. " — Dave Hunt The Bible says she is a city and gives remarkable clues to her identity. Reproduced here by permission is one chapter of one of the greatest books of our time on Bible prophecy, "A Woman Rides The Beast" by prophecy researcher Dave Hunt. ©1994 by Dave Hunt. A City on Seven Hills. iBibleSpace. The fool hath said in his heart, There is no God. Endtime Ministries with Irvin Baxter. Religious Freedom. Founders Plan - The American Constitution and Christian Heritage.

StormCloudsGathering. Steve Quayle - Giants - Dead Scientists - Gold Metals - Radio Host. Spiritual Warfare: Knowing Your Enemy. Prophecy of the Popes. Charles H. Spurgeon Quotes (Author of Morning and Evening, Based on the English Standard Version) (page 2 of 45) Reformed Theology from R.C. Sproul: Ligonier Ministries. Pontius Pilate - Refers To Christ In Official Records. Author's Background Pontius Pilate (1 BC - circa AD 37) was the fifth Roman procurator of Judea (AD 26 - 36 ) under Emperor Tiberius, who sentenced Jesus to death by crucifixion. The quotes below refer to the Acts of Pontius Pilate.

The existence of the Acts of Pontius Pilate is strongly supported by Epiphanius (Heresies 50.1), Justin Martyr (First Apology, A.D. 150) and Tertullian (Apology, A.D. 200). KNOW YOUR ENEMY Ephesians 6 – AND HIS SCHEMES. Finally, be strong in the Lord and in his mighty power. Put on the full armor of God, so that you can take your stand against the devil’s schemes. For our struggle is not against flesh and blood, but against the rulers, against the authorities, against the powers of this dark world and against the spiritual forces of evil in the heavenly realms. Therefore put on the full armor of God, so that when the day of evil comes, you may be able to stand your ground, and after you have done everything, to stand.