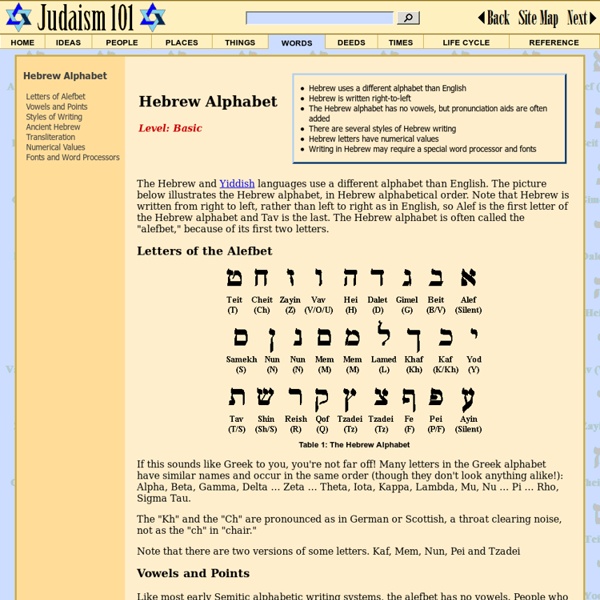 The Hebrew and Yiddish languages use a different alphabet than English. The picture below illustrates the Hebrew alphabet, in Hebrew alphabetical order. Note that Hebrew is written from right to left, rather than left to right as in English, so Alef is the first letter of the Hebrew alphabet and Tav is the last. The Hebrew alphabet is often called the "alefbet," because of its first two letters. Letters of the Alefbet Table 1: The Hebrew Alphabet If this sounds like Greek to you, you're not far off! The "Kh" and the "Ch" are pronounced as in German or Scottish, a throat clearing noise, not as the "ch" in "chair." Note that there are two versions of some letters. Vowels and Points Like most early Semitic alphabetic writing systems, the alefbet has no vowels. However, as Hebrew literacy declined, particularly after the Romans expelled the Jews from Israel, the rabbis recognized the need for aids to pronunciation, so they developed a system of dots and dashes called nikkud (points).

Hebrew Lexicon The Old Testament Hebrew lexicon is Brown, Driver, Briggs, Gesenius Lexicon; this is keyed to the "Theological Word Book of the Old Testament." Also included are pronunciations of each word with alternate pronunciations if available. Bible Study Tools offers two Bible versions, King James and New American Standard, for studying within the Old Testament lexicons. NOTE: In order to see the actual Greek and Hebrew characters you must download and install the free BST Fonts. The Hebrew Lexicon has been designed to help the user understand the original text of the Bible. The Hebrew Lexicon can be searched in three ways: * By Strong's Numbers: If you know the number of the entry you desire to see, you can enter it into the text box and click "Search" to view that entry These files are public domain.

Hebrew Glossary Then name Ashkenaz (Bereishit 10:3) has since the 10th century been identified with Germany. As the German and French Jews of the medieval period formed a uniform group in culture and religious customs, they were all referred to as Ashkenazim in contradistinction to the Sefardim or Spanish- Portuguese Jews. Ashkenazim are the people who use Nusach Ashkenaz, the prayer arrangement adopted by the medieval Franco-German Jews, including certain variations described as belonging to the Polish custom (Minhag Polin). In the 18th century, the Chasidic movement adopted the Sefardic arrangement of prayers; hence, the Chasidim have been called Sefardim on many occasions. The Ashkenazim in Eastern Europe developed an intense religious life, disseminating Talmudic scholarship among the people to a degree never before surpassed in Jewish history. A high Jewish literacy existed in an illiterate non-Jewish environment. The vitality of the Ashkenazim still dominates wherever they are transplanted.

Latin Alphabet and Pronunciation Latin Alphabet Learning the Latin alphabet is very important because its structure is used in every day conversation. Without it, you will not be able to say words properly even if you know how to write those words. The better you pronounce a letter in a word, the more understood you will be in speaking the Latin language. Below is a table showing the Latin alphabet and how it is pronounced in English, and finally examples of how those letters would sound if you place them in a word. Latin Pronunciation You saw how a letter is written and might be pronounced, but there is nothing better than hearing the sound of the letters in a video or audio. The alphabet and its pronunciation have a very important role in Latin, therefore they need very special attention.