Just Write It - When The Bough Breaks. Title: When the Bough BreaksSummary: Sherlock finds himself playing unwilling babysitter to a blond, blue-eyed baby who bears a striking resemblance to a certain doctor...Rating: GGenre: comedy, awwwwwwwWarning: Bring insulinDisclaimer: All characters are property of ACD, Marvelous Mark Gatiss, Steven "The Moff" Moffat, and the BBC. 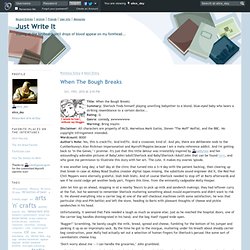 No copyright infringement intended.Wordcount: 8000Author's Note: Yes, this is crack! Fic. And kid! Fic. And a crossover, kind of. Sadynax and her astoundingly adorable pictures of Baby! It was another long day; a half day at the clinic that turned into a 3/4 day with the patient backlog, then clearing up that break-in case at Abbey Road Studios (master digital tapes missing, the substitute sound engineer did it, the Red Hot Chili Peppers were eternally grateful, blah blah blah). "Bugger! 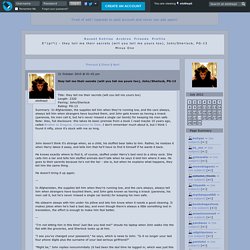 Note: Also, full disclosure: this takes its basic premise from a book I read maybe 10 years ago, called Brother to Dragons, Companion to Owls. Gone Is My Past - cyerus - Sherlock (TV), Sherlock Holmes & Related Fandoms. When Sherlock got out of the cab, the first thing he noticed was the barking. 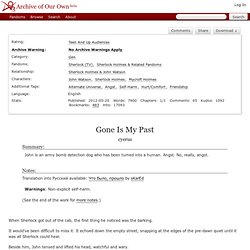 It would've been difficult to miss it. It echoed down the empty street, snapping at the edges of the pre-dawn quiet until it was all Sherlock could hear. These Quiet Moments - Cafe_Cannibal - Sherlock. Wild Born - Chapter 1 - cloud_wolfbane - Sherlock. Chapter Text John is born on a cool April morning. 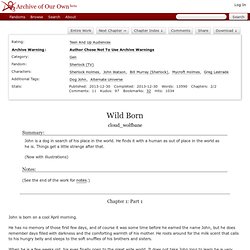 He has no memory of those first few days, and of course it was some time before he earned the name John, but he does remember days filled with darkness and the comforting warmth of his mother. He roots around for the milk scent that calls to his hungry belly and sleeps to the soft snuffles of his brothers and sisters. When he is a few weeks old, his eyes finally open to the great wide world.

It does not take John long to learn he is very different from his siblings. His mother tells him that when she went into heat, the farmer brought in a herding dog from the next farm to breed more herding dogs. His brothers and sisters have black and white pelts and floppy ears. As John grows older, his legs grow longer and longer and his soft puppy body gains lean muscle. Upon This Throne - ifonlynotnever - Sherlock.

Inside his mind is a Palace. 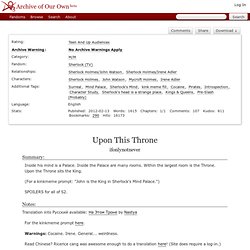 Inside the Palace are many rooms. Within the largest room is the Throne. Upon the Throne sits the King. From time to time, the Throne Room changes. Sometimes it gets redecorated, sometimes it moves to a new "largest room" entirely, and sometimes—a very rare sometimes—he demolishes the room himself and builds it anew. He begins to build the Mind Palace when he is a child of five.

And on the carved-wood Throne sits twelve-year-old Mycroft, the elder brother he adores beyond compare. And then Mycroft lies, and he gets older, and he goes to school far away, and Sherlock tries his hardest to tear apart the Throne Room. In time, he forgives Mycroft, but never again does his brother sit upon the Throne. The Care and Keeping of Your Mad Genius, a sherlock fanfic. The Care and Keeping of Your Mad Genius "I can see why you like having him around. 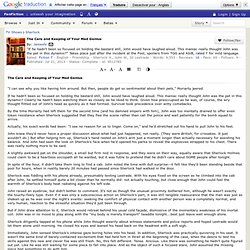 But then, people do get so sentimental about their pets," Moriarty jeered. If he hadn't been so focused on holding the bastard still, John would have laughed aloud. This maniac really thought John was the pet in this dynamic? Clearly he hadn't been watching them as closely as he liked to think. By the time Moriarty had left them for the second time (and his damned snipers with him), John was too mentally drained to offer even token resistance when Sherlock suggested that they flee the scene rather than call the police and wait patiently for the bomb squad to arrive. Actually, his exact words had been: "I see no reason for us to linger.

John knew they'd never have a proper discussion about what had just happened, not really. In spite of the hour, it didn't take them long to find a cab. A Building of Bridges - Chapter 1 - pengke - Sherlock. Chapter Text Sherlock was with Lestrade when the call came over the radio, a mere three streets away from where the situation was unfolding. 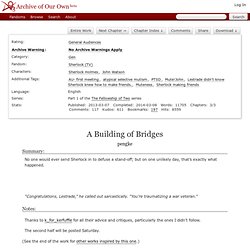 The officer who made the call sounded young, frightened, and ill-equipped to handle a gunshot victim and an armed suspect. “I have to get over there,” said Lestrade. “You’re going to follow me, aren’t you?” Sherlock didn’t even dignify him with a response; he merely began trotting down the pavement with his long distance-eating strides. The crime scene was obvious to even the dullest idiot, marked by a crowd of spectators being frantically pushed back by a handful of PCs.

The Quiet Moments - belovedmuerto - Sherlock. The first time it happens is... unexpected. 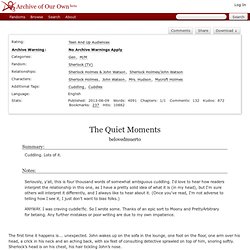 John wakes up on the sofa in the lounge, one foot on the floor, one arm over his head, a crick in his neck and an aching back, with six feet of consulting detective sprawled on top of him, snoring softly. Sherlock’s head is on his chest, his hair tickling John’s nose. John sneezes, his whole body jerking with it, and Sherlock snorts and lifts his head. “Oh,” he says. “Um.” Every Dog Has His Day - trajektoria - Sherlock (TV), Sherlock Holmes & Related Fandoms. Messages Between Mates - icarryasonicscrewdriver - Sherlock. Edit: Thank you all so very much for the wonderful response! 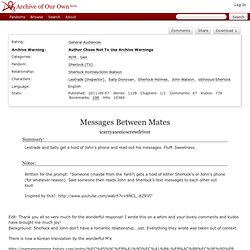 I wrote this on a whim and your lovely comments and kudos have brought me much joy! Background: Sherlock and John don't have a romantic relationship...yet. Everything they wrote was taken out of context. There is now a Korean translation by the wonderful M'e. Notes - Kryptaria - Sherlock (TV), Sherlock Holmes & Related Fandoms. “...lines were crazy. 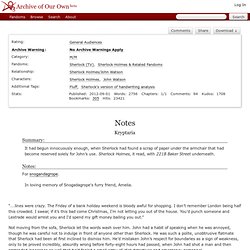 The Friday of a bank holiday weekend is bloody awful for shopping. I don’t remember London being half this crowded. I swear, if it’s this bad come Christmas, I’m not letting you out of the house. You’d punch someone and Lestrade would arrest you and I’d spend my gift money bailing you out.” Not moving from the sofa, Sherlock let the words wash over him. Sherlock opened his eyes just enough to watch John ball up the plastic bags and bin them on his way out of the kitchen.

So Sherlock was up off the sofa in seconds, crossing into the kitchen at a run. As quietly as he could, he unrolled the plastic bags, searching through them until he found the treasure that John always hid there: the shopping list. Throwing the shopping bags aside, Sherlock smoothed the paper over his leg, looking at the loops and lines of John’s handwriting. It had begun innocuously enough, when Sherlock had found a scrap of paper under the armchair that had become reserved solely for John’s use.

Man's Best Friend - jazzmilla - Sherlock (TV), Sherlock Holmes & Related Fandoms. “Come on, play the game!” Sherlock’s hand hovered near the doorknob. It wasn’t a game, it was chance. The cabbie had a fake gun and an aneurysm and he should have left already because he solved the case, but his hand could not seem to complete that final step. It wasn’t a game, but he could win anyway. Unconventional Decor - coloredink - Sherlock (TV), Sherlock Holmes & Related Fandoms.

"Well," John says a few minutes later, "I'm off to sleep in my own bed. " And he rolls and plants his feet on the floor, pausing a moment to ruffle one hand through his hair. He looks over his shoulder at Sherlock, who's still sprawled half on top of the duvet. "You don't mind, do you? " Sherlock arranges his expression into one of blank indifference. "Of course not.

The thing is, the room shouldn’t be a room at all. Not this kind of room, anyway. Feathers 'verse - Kryptaria - Sherlock (TV), Sherlock Holmes & Related Fandoms. The mind is its own place - TardisIsTheOnlyWayToTravel - Sherlock. Pave the Way Series - couchbarnacle - Sherlock. Shadow - Chapter 1 - qthewetsprocket - Sherlock. Chapter Text “His name’s Shadow.” The cat looked up with lazy yellow eyes. It was huge and black with a face like vampire and dear God how long had Johnny had been feeding it behind their house? “It’s a stray, you tit-box. Strays don’t have names.” “He does. Taming the beast, a sherlock fanfic. Hello! I know it's been a while since I updated anything. I've been reading Sir Arthur Conan Doyle's work and been watching Sherlock so it's not surprise that this little one-shot popped into my head. Moon Song - Chapter 1 - foxboxtango - Sherlock. Chapter Text Prelude The Wolf was not a beast, except in the most literal sense of the word.

Man's Best (and Sometimes Only) Friend, a sherlock fanfic. Home Chapter 1: Longing, a sherlock fanfic. A/N: Hi there, you. Nice to see you again or perhaps, if this is your first time here, nice to meet you. I really should be writing for one of my three on going stories... but this idea wouldn't leave me alone. In which John is a cuddly, BAMF assassin. - notbeloved07 - Sherlock (TV), Sherlock Holmes & Related Fandoms. Chapter 1 "Thus," Sherlock said to Lestrade regarding the mysterious person who shot the pill-wielding cabbie, "we're looking for someone left-handed, five foot seven, military trained, with a strong moral principle... " his voice trailed off when his quick eye caught a sandy-haired man behind a police car who seemed to match his description exactly. The man whirled around and started running off as soon as Sherlock saw him.

Sherlock bounded towards him. Ague - gardnerhill - Sherlock Holmes & Related Fandoms, Sherlock Holmes - Arthur Conan Doyle. He felt the desert heat well enough, but for some reason his shot arm did not hurt as badly as he thought. The Red Thread, a sherlock fanfic. The Red Thread By Debesmanna A/N: This one is for my friend NinjaFro, who requested Johnlock fluff and red pants. I did my best, so hopefully I didn't disappoint! ^_^ What Sherlock Missed, a sherlock fanfic. They were on the train home to London when John sneezed. A Man and His Dog - Rivalshipping_Archive (rivalshipping) - Sherlock (TV), Sherlock Holmes & Related Fandoms. 221B Paw Stories Chapter 1: Tea for two, a sherlock fanfic. Disclaimer: All publicly recognizable characters, settings, etc. are the property of their respective owners, Arthur Conan Doyle and in their BBC version Steven Moffat, Mark Gatiss, and Stephen Thompson.

The original characters and plot are mine. I am in no way associated with the owners, creators, or producers of any media franchise. No copyright infringement is intended. A/N: This is the continuation of my story Sherlock Holmes's 7 Paw stories: John. Between Asleep and Awake - kaeorin - Sherlock. John rarely got sick.

When he was younger, he could only remember staying home from school three times: a whole week in kindergarten when he had the chicken pox, another week in second grade when he got his tonsils removed, and half a day in middle school when he (along with about a third of the other students) got food poisoning from the cafeteria one Friday. The Solider Returns, a sherlock fanfic. The Tumblr Crackficlets 10 - Sometimes He Has Bad Days - darth_stitch - Sherlock (TV), Sherlock Holmes & Related Fandoms. The Real Deal - thegingerintheback (CdnGingerGirl) - Sherlock (TV), Sherlock Holmes & Related Fandoms.