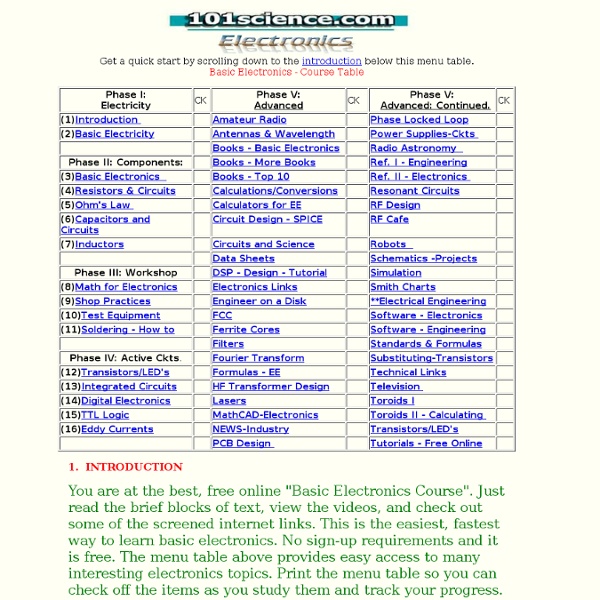 {*style:<b> Get a quick start by scrolling down to the introduction below this menu table. Basic Electronics - Course Table You are at the best, free online "Basic Electronics Course". Just read the brief blocks of text, view the videos, and check out some of the screened internet links. This is the easiest, fastest way to learn basic electronics. {*style:<b><b>Maybe you already know some basic electronics and want to test yourself to see exactly how much you do know. </b></b>*} {*style:<b>Explanation of AC and DC currents. </b>*} {*style:<b><b><b> P - I*V </b></b></b>*} {*style:<b>Watch the video . If you don't have a clue as to what electrical current and voltage are - read on. DC Theory Part 1 - DC Theory part 2 {*style:<b> </b>*} More book recommendations. There is another (and less expensive and practical) method of learning basic electronics. It is hands-on by doing simple projects. Get the MAKE: Electronics (Learn By Discovery) book below. {*style:<b><b>Combined resistance of <b><b>Red </b></b>

Gauss's law In physics, Gauss's law, also known as Gauss's flux theorem, is a law relating the distribution of electric charge to the resulting electric field. The law was formulated by Carl Friedrich Gauss in 1835, but was not published until 1867.[1] It is one of the four Maxwell's equations which form the basis of classical electrodynamics, the other three being Gauss's law for magnetism, Faraday's law of induction, and Ampère's law with Maxwell's correction. Gauss's law can be used to derive Coulomb's law,[2] and vice versa. Qualitative description of the law[edit] In words, Gauss's law states that: you knew i was going to make one. they are all over pinterest....(i still am not signed up for pinterest because i don't have time for one more thing but browsing is fun!) so we made one. i took a box of 64 crayons and took out the blacks and browns.i used another small box and doubled up on the good colors i liked and hot glued them to the top of our canvas. then we turned our blow dryer to hot on high. not long after you set the hair dryer by the crayons they get shiny and then the wax starts to melt!

Lackadaisy Expressions Boy, I didn't know what I was getting myself into when I started this. I've had requests for some sort of expressions tutorial dating back a while now, so I figured, "Sure! I can explain expression drawing...and it'll be way better than all those tutorials out there that are nothing but charts of generic expressions. Yeah! antenna basics Antennas, to quote a friend, are one of life's eternal mysteries. "All I'm totally certain of is that any antenna is better than no antenna and the antenna should preferably erected as high and be as long as is possible or desirable". Here we will discuss the very basics of antennas including the the amazing terminated tilted folded dipole antenna. Super Precision Gyroscope (without gimbals) - From Gyroscope.com The Super Precision Gyroscope has been designed and built to the highest precision from the very start, made from solid brass with a light-weight aluminium frame. Carefully chosen stainless-steel miniature ball bearings allow it to run smoothly and almost silently for an amazingly long time. The gyroscope comes with a number of attachments allowing numerous configurations to perform scientific, educational or simply mesmerising experiments. The gyroscope comes with 2 x 50 mm long stainless steel extension rods, 2 x ball ends, 1 x slotted end. The rods when screwed together will extend 100mm, they can be screwed in other positions to create various experiments.

70 Things Every Computer Geek Should Know. The term ‘geek’, once used to label a circus freak, has morphed in meaning over the years. What was once an unusual profession transferred into a word indicating social awkwardness. As time has gone on, the word has yet again morphed to indicate a new type of individual: someone who is obsessive over one (or more) particular subjects, whether it be science, photography, electronics, computers, media, or any other field.