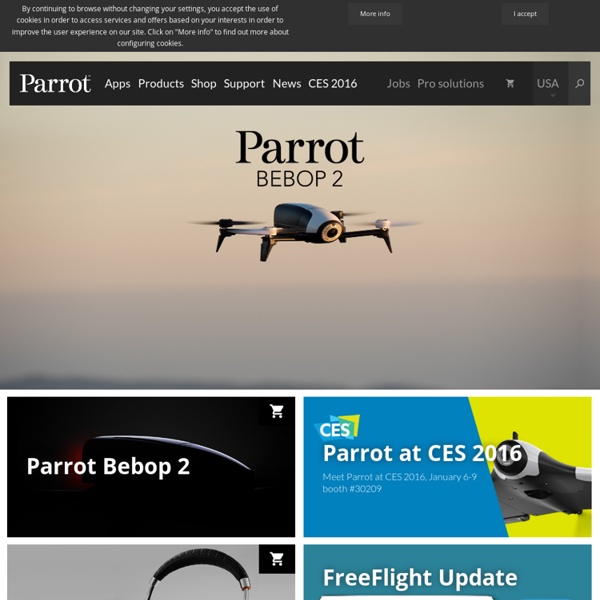 Clara Shih: Web 2.0 Expo San Francisco 2010 - Co-produced by Tec Clara helped kick off the Social CRM movement in 2007 with her Faceconnector application, which integrates Facebook and Salesforce CRM. She is author of the newly released bestseller, The Facebook Era: Tapping Online Social Networks to Build Better Products, Reach New Audiences, and Sell More Stuff about Facebook and Twitter for business, which has been featured in The New York Times, Entrepreneur Magazine, CRM Magazine, and is being used as a textbook at Stanford and Harvard Business School. Clara recently left her position as Product Line Director of the AppExchange at salesforce.com to found Hearsay Labs, which provides social media tools enabling sales, marketers, and IT to manage customer engagements across Facebook, Twitter, and their own websites. Web site

Parrot AR.Drone: Where Web, Mobile, Gaming and Reality Converge: The days of multiple gadgets, devices and laptops are numbered. Today’s consumers are looking for technology that works across any platform and can control multiple devices. The convergence of technology hardware and software is enabling consumers to combine work and play anywhere at any time. Taking an activity like remote-controlled aircraft to an entirely new level, the Parrot AR.Drone combines consumers’ love of mobile technology with the spirit of adventure in gaming environment. The Parrot AR.Drone, a quadricopter piloted with an iPhone or iPod touch, allows consumers to fly in a real-world environment while simultaneously playing a video game from the device’s screen. Parrot North America executive, Christian Coly will address how video gaming convergence will get American families off of the couch and even outside to reinvigorate play.

Kevin Lynch About Skype: Executive team Skype is for doing things together, whenever you’re apart. Skype’s text, voice and video make it simple to share experiences with the people that matter to you, wherever they are. With Skype, you can share a story, celebrate a birthday, learn a language, hold a meeting, work with colleagues – just about anything you need to do together every day. You can use Skype on whatever works best for you - on your phone or computer or a TV with Skype on it. If you pay a little, you can do more things, in more ways, with more people – like call phones, access WiFi or send texts.

Josh Silverman Josh Silverman is an entrepreneurial executive who has built and run some of the world’s most loved consumer technology companies. In July 2011 he joined American Express as President, US Consumer Services, a Corporate Officer of the company with overall responsibility for the US consumer card and travel businesses. Previously Mr Silverman was the CEO of Skype. During his 2.5 year tenure, Skype added more than 300 million users, became ubiquitous across mobile and consumer electronic devices, doubled revenues and tripled profits, while growing to account for 25% of the world’s international calling minutes. According to Landor & Associates Skype was the 2nd-fastest growing brand by value (after Facebook) during the 2008-2010 period. Prior to Skype Mr. Mr. Mr Silverman holds a BA (Magna Cum Laude) in Public Policy from Brown University, and an MBA from Stanford, where he was class Co-President and an Arjay Miller Scholar. Recent Milestones Investments Videos Sources

Danny Sullivan: Web 2.0 Expo San Francisco 2010 - Co-produced by Widely considered a leading “search engine guru,” Danny Sullivan has been helping webmasters, marketers and everyday web users understand how search engines work for over a decade. Danny’s expertise about search engines is often sought by the media, and he has been quoted in places like The Wall St. Journal, USA Today, The Los Angeles Times, Forbes, The New Yorker and Newsweek and ABC’s Nightline. Danny began covering search engines in late 1995, when he undertook a study of how they indexed web pages. The results were published online as “A Webmaster’s Guide To Search Engines,” a pioneering effort to answer the many questions site designers and Internet publicists had about search engines. Danny currently heads up Search Engine Land as editor-in-chief, which covers all aspects of search marketing and search engine news. Web site