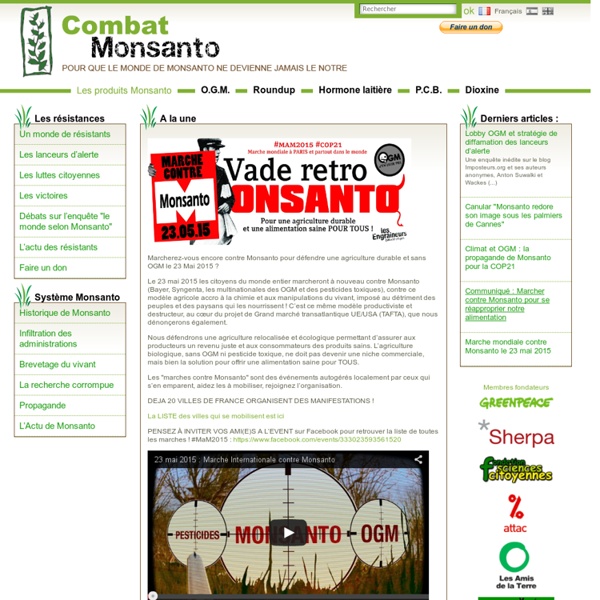 One GMO Success We Missed On Election Day Written by Matt McDermott One very interesting ballot initiative we missed: Examiner reports San Juan County, Washington passed Initiative Measure No. 2012-4, making it illegal to “propagate, cultivate, raise or grow plants, animals and other organisms which have been genetically modified.” Exceptions are allowed for GMO cultivation for research and health care use. The initiative does not prohibit the sale of products containing GMO ingredients, nor require labeling of those products made with them. Violating the order results in a fine for first offense, increasing to a gross misdemeanor charge on the third offense.

Can This Farmer Finally Defeat Monsanto? NOTE: This is a guest post from The Safe Food Foundation, an Australian based not-for-profit campaign and advocacy organization. Our mission is to make the World’s food supply clean, safe, nutritious, full of taste and produced in a way that enhances our environment, as well as our social and economic systems. We are working partnership with Slater & Gordon Law Firm to raise the funds required for farmer Steve Marsh’s landmark case. While big business and corporate power may have defeated California’s proposition 37 to get GMOs labeled, the battle for good, safe food rages on. With all the recent media attention surrounding genetically modified (GM) foods, real change is slowly but surely brewing! People the world over are taking notice, coming together and demanding information about GMOs and their presence in our food system.

AquaBounty CEO Says GMO Salmon to be Approved in 2013, Tell the FDA No Way! Sign the letter to the FDA, President Obama and your members of Congress asking them to Ban GMO salmon. Please add your own comments to make your statement even more powerful. Dear President Obama; Member of Congress; FDA Commissioner Hamburg, RE: Docket No. 14-year-old debates GMOs with condescending TV host Rachel Parent is 14 and has the crazy idea that GMOs should be labeled in food. (What’s next, attacking those sweet carcinogens in our makeup?!) The young activist has been making public speeches about GMOs since age 12, when my idea of “making a public statement” was layering my dad’s flannel shirt over a clearance American Eagle tee. Parent recently challenged Canadian TV personality Kevin O’Leary to a debate about GMOs after he said “Stupid people protest about Monsanto”: Have me on your show next week, and if you promise not to use the word “stupid,” I won’t use the word “fascist.”

Bangladesh - farmers say no to GM vegetables - News Bt-Brinjal will have negligible benefit but would present an enormous hazard to human health. It would be profound disservice to Bangladesh if Bt-Brinjal were allowed to enter her food supply. Known locally as Bt-Brinjal, the GM eggplant contains a synthetic insect-killing toxin similar to Cry1Ac from the soil bacterium Bacillus thuringiensis (hence the acronym Bt) targeted at the fruit and shoot borer. Hip Hop is not down with Monsanto And you thought rap was all cars, Riff Raff and Gucci Mane. Yeah, there’s plenty of that, but there are also plenty of rappers still dropping knowledge, as was ubiquitous during Hip Hop’s Golden Age –’88 to ’95 — and without a hint of irony or romantic nostalgia. I’m thinking Common, Talib Kweli, who was out there arguing with cops and CNN in Ferguson, and the homey Jasiri X. Despite rap’s reputation for worst behavior, it’s still one of the last, if only, musical genres that counts social studies, history and science as subjects, even if only as electives. Hip Hop’s latest course offering: genetically modified organisms, or GMOs.

The Seeds of Vandana Shiva Vandana Shiva, Ph.D., is a physicist and activist who works tirelessly to defend the environment and protect biodiversity from multinational corporations. Her life's work has culminated in the creation of seed banks that may one day save future generations' food sovereignty, but how she got there is a fascinating story, chronicled in the documentary "The Seeds of Vandana Shiva." Shiva, "a brilliant scientist" who became "Monsanto's worst nightmare and a rock star of the international organic food movement,"1 grew up in a Himalayan forest, where her father, a forest conservator, carried out inspections. She would travel up to 45 miles a day with her father as a young girl, and as they traversed the forest he taught her everything about the trees, plants and herbs therein. "We had a classroom out in the forest," Shiva said, but her formal studies were done in a convent which, at that time, didn't regard science as a subject fit for girls. A Search for Knowledge as a Whole