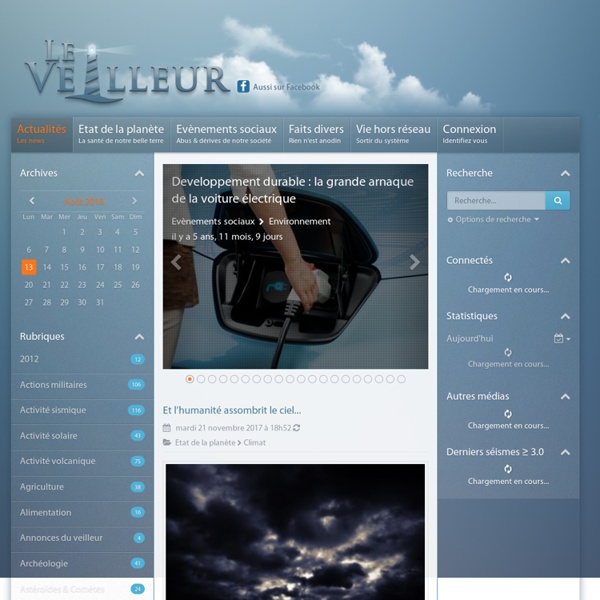 An amateur’s guide to turning impostor syndrome into an asset Take one look at my title, and you’d think I know what I’m doing when I turn up to work every day. Over a decade ago I started a company straight out of university with a mate, Scott. We had no prior business experience and no grand plan. Today we have thousands of awesome employees, and millions of people across the planet use our software every day. Surely that kind of success comes from massive expertise, right? Let me let you in on a secret: most days, I feel like I don’t really know what I’m doing.

How They Rebuilt Stonehenge Monday, 1 July 2013 UFO Aliens UK "For decades the official Stonehenge guidebooks have been full of fascinating facts and figures and theories surrounding the world's greatest prehistoric monument. What the glossy brochures do not mention, however, is the systematic rebuilding of the 4,000 year old stone circle throughout the 20th Century. The restoration has been kept elusive and a large percentage of those planning a trip to the monument have no idea that they aren't getting the full story."

Fukushima: Japanese Government, Big Business and Corporate Media Tried to Hide a Grave Threat The doomed nuclear reactor at Fukushima, Japan is leaking 300 tons of water into the ground and ocean every day. “Collusion among the Japanese government, big business and the corporate media worked to prevent the world from knowing about a grave threat.” Nuclear power cannot be made safe and, therefore, is too risky at any price. The 48 Laws of Power Background[edit] Greene initially formulated some of the ideas in The 48 Laws of Power while working as a writer in Hollywood and concluding that today's power elite shared similar traits with powerful figures throughout history.[5] In 1995, Greene worked as a writer at Fabrica, an art and media school, and met a book packager named Joost Elffers.[4][8] Greene pitched a book about power to Elffers and six months later, Elffers requested that Greene write a treatment.[4] Although Greene was unhappy in his current job, he was comfortable and saw the time needed to write a proper book proposal as too risky.[10] However, at the time Greene was rereading his favorite biography about Julius Caesar and took inspiration from Caesar's decision to cross the Rubicon River and fight Pompey, thus inciting the Great Roman Civil War.[10] Greene would follow Caesar's example and write the treatment, which later became The 48 Laws of Power.[10] He would note this as the turning point of his life.[10]

Tokyo Tower Gigapixel Panorama About this photo This is a 150-gigapixel image shot from the top of the Tokyo Tower. It was shot in September 2012 with the kind assistance from the management of the Tokyo Tower. The trip to Tokyo was sponsored by Fujitsu Technology Solutions, and this panorama was rendered and edited on a Fujitsu Celsius R920 workstation. This image was shot with a Canon 7D digital SLR camera, with a 400mm telephoto lens.

MK Ultra: CIA Admits Behavioral Engineering On Humans BY Arjun This may be old information, but many people have yet to hear about project MK Ultra. It was the name for a previously classified research program through the CIA’s scientific intelligence division. It was the CIA’s program of research in behavioral modification on human beings that’s now declassified. The United States government even issued a national apology for the program while Bill Clinton was in office.

Nuclear Expert: Fukushima Is 'Emergency Without End' Photo: Matthias Lambrecht/cc/flickrAs the disaster at Fukushima plant continues to unfold, one nuclear expert is warning that "this is an accident that’s shockingly not stopping." Arjun Makhijani, President of the Institute for Energy and Environmental Research (IEER), sounds particular alarm around radioactive strontium that is being released from the trouble-stricken plant: Fukushima continues to be an emergency without end – vast amounts of radioactivity, including strontium-90 in the groundwater, evidence of leaks into the sea, the prospect of contaminated seafood.

Gimme Bar Save the Web Don’t bookmark the web. Save it. Gimme Bar doesn’t just keep bookmarks; it stores items in your personal library in the cloud. The Only Way to Keep Your Resolutions The answer, I contend, is that this view of self-control is wrong. In choosing to rely on rational analysis and willpower to stick to our goals, we’re disadvantaging ourselves. We’re using tools that aren’t only weak; they’re also potentially harmful. If using willpower to keep your nose to the grindstone feels like a struggle, that’s because it is. Your mind is fighting against itself. It’s trying to convince, cajole and, if that fails, suppress a desire for immediate pleasure. Surreal satellite pictures of our planet (22 pictures). Alaska North Slope. Uvs Lake, Mongolia. Uluru, Australia. Sudan. South Island of New Zealand. Sirmilik National Park in Nunavut, Canada.

Chain Reaction at Fukushima – Scientists at Japan’s Fukushima nuclear power plant are preparing for their toughest clean-up operation yet – two and a half years after three of the plant’s reactors suffered a meltdown in Japan’s worst-ever nuclear power disaster. Follow RT’s LIVE UPDATES on the Fukushima leak emergency The operation, to remove 400 tons of highly irradiated spent fuel beneath the plant’s damaged Reactor No. 4, could set off a catastrophe greater than any we have ever seen, independent experts warn. An operation of this scale, says plant operator Tokyo Electric Power Company, has never been attempted before, and is wrought with danger. An uncontrolled leak of nuclear fuel could cause more radiation than the March 2011 disaster or the 1986 Chernobyl catastrophe, say consultants Mycle Schneider and Antony Froggatt.

Write Your Name in Runes Write Your Name in Runes The runic alphabet, or Futhark, gets its name from its first six letters (f, u, th, a, r, k), much like the word "alphabet" derives from the first two letters of the Greek alphabet, alpha and beta. Each rune not only represents a phonetic sound but also has its own distinct meaning often connected with Norse mythology. Scholars believe that early Germanic and Scandinavian peoples used the runes originally as a means of communication and only later for magical purposes. Fehu

by Dr. Isabelle A. Moser with Steve Solomon This book was written to help educate the general public about the virtues of natural medicine and to encourage the next generation of natural healers. This book is not copyright; it is public domain material. Reproduction and dissemination is encouraged as long as the entire book is kept intact and remains unaltered. Steve Solomon, June, 1997.