Magazine - All the Single Ladies 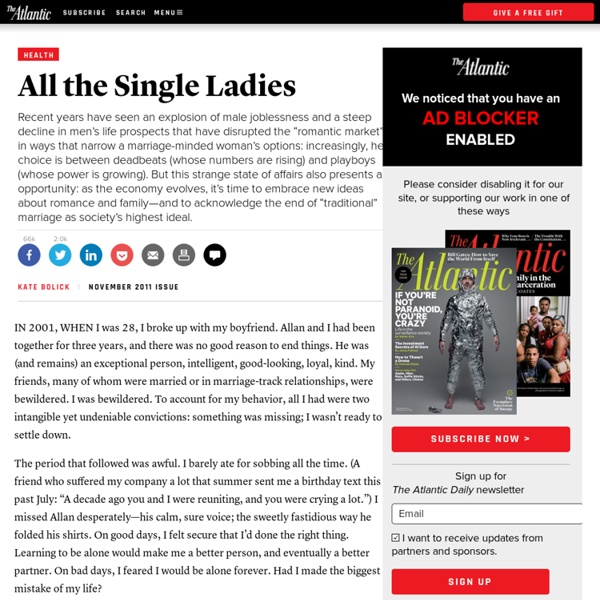 In 2001, when I was 28, I broke up with my boyfriend. Allan and I had been together for three years, and there was no good reason to end things. He was (and remains) an exceptional person, intelligent, good-looking, loyal, kind. The period that followed was awful. Also see: The End of Men Earlier this year, women became the majority of the workforce for the first time in U.S. history. Delayed Childbearing Though career counselors and wishful thinkers may say otherwise, women who put off trying to have children until their mid-thirties risk losing out on motherhood altogether. Marry Him! In Search of Mr. Let's Call the Whole Thing Off The author is ending her marriage. The Wifely Duty Marriage used to provide access to sex. Sex and the College Girl "This is clearly a mess and not one that is going to clear up with magic speed on the wedding night." A Successful Bachelor (June 1898) "More interest should be taken in bachelors. Ten years later, I occasionally ask myself the same question.

The Startling Plight of China's Leftover Ladies - By Christina Larson The Spicy Love Doctor was running late. A well-heeled crowd one recent Sunday afternoon had packed into the second-floor lounge of Beijing's Trends Building -- home to the publishing offices of several glossy magazines, including the Chinese editions of Cosmopolitan, Esquire, and Harper's Bazaar -- to hear Wu Di, a contributor to China's Cosmopolitan and author of an alluring new book, I Know Why You're Left. The poised, professional crowd, outfitted in black blazers, leather boots, and trendy thick-framed glasses, was composed mostly of women in their mid-20s to mid-30s -- prime Cosmo readers and all there waiting patiently to hear Wu, who typically charges $160 an hour for "private romance counseling," explain their surprising plight: being single women in a country with a startling excess of men. The majority of her talk was devoted not to such timeless aphorisms, but to describing a new conundrum in China: the plight of its sheng nu, or "leftover ladies." But it's not just China.

Hartlepool's lost generation caught in the youth unemployment trap | Business Of the many words that crop up as Ashley Short sits down to reflect on his education and employment history, three of the most frequent are "nothing", "depressing" and "temporary". "They put us through things that won't get you a job," he says from beneath the peak of a large black baseball cap. "It's temporary: there's nothing out there. I've lost count of all the CVs and application forms I've sent out and you're hearing nothing back. Short is 23 and has two young children. And that, for the young people of this port town and hundreds of thousands of others across the country, is the big question: how much longer? The West View Project, which uses sailing, camping and rock climbing to build up young people's confidence and discipline, has seen its share of hardship over the three decades of its existence. Wise can trace some of the effects of the present slump back to the closure in May last year of the Garland call centre on Hartlepool's redeveloped marina. Phillip Inman

Why Do They Hate Us? - By Mona Eltahawy In "Distant View of a Minaret," the late and much-neglected Egyptian writer Alifa Rifaat begins her short story with a woman so unmoved by sex with her husband that as he focuses solely on his pleasure, she notices a spider web she must sweep off the ceiling and has time to ruminate on her husband's repeated refusal to prolong intercourse until she too climaxes, "as though purposely to deprive her." Just as her husband denies her an orgasm, the call to prayer interrupts his, and the man leaves. After washing up, she loses herself in prayer -- so much more satisfying that she can't wait until the next prayer -- and looks out onto the street from her balcony. She interrupts her reverie to make coffee dutifully for her husband to drink after his nap. Taking it to their bedroom to pour it in front of him as he prefers, she notices he is dead. Yes: They hate us. But let's put aside what the United States does or doesn't do to women. But at least Yemeni women can drive. Hatred of women.

'My parents had no idea of the damage their hippie values did to me' - Features, Health & Families I had always been a bit of a wild child – I got into the punk scene when I was about 14 and started using recreational drugs such as speed and LSD. I first came across heroin when I was 16. I was at a friend's squat in Islington and someone produced some. I felt an incredible warmth throughout my body. I come from a very privileged background. My parents had no idea of the damage their hippie values did to me. I eventually got expelled for various reasons, including not turning up to games lessons and taking drugs, so they sent me off to a kibbutz for a while. But when I came back from Israel I walked into a friend's flat in Maida Vale and they were all sitting there injecting. I moved from job to job and country to country, but the problem just came with me. I cringe at the memory. But for me that never happened. It only ever gets worse if you are an addict. But that rock-bottom moment when I overdosed was the moment the drugs no longer worked for me. There are still consequences.

Magazine - The End of Men Earlier this year, women became the majority of the workforce for the first time in U.S. history. Most managers are now women too. And for every two men who get a college degree this year, three women will do the same. John Ritter In the 1970s the biologist Ronald Ericsson came up with a way to separate sperm carrying the male-producing Y chromosome from those carrying the X. In the late 1970s, Ericsson leased the method to clinics around the U.S., calling it the first scientifically proven method for choosing the sex of a child. Feminists of the era did not take kindly to Ericsson and his Marlboro Man veneer. Ericsson, now 74, laughed when I read him these quotes from his old antagonist. Even more unsettling for Ericsson, it has become clear that in choosing the sex of the next generation, he is no longer the boss. Why wouldn’t you choose a girl? Ericsson’s extended family is as good an illustration of the rapidly shifting landscape as any other.

Paul Gascoigne: Alive and kicking | Football In June last year, a dark rumour began to circulate: Paul Gascoigne had two days to live. There were even stories that the former England footballer was already dead – after a car crash, of pneumonia, from the drink. Nobody wanted to believe the rumours, but there seemed to be a grim inevitability to them. A month later, Gascoigne proved he was alive in bizarre and equally dark circumstances. A year on, Gascoigne is still in rehab, living in Bournemouth and attempting to rebuild his life. He's more relaxed on his return: "I'll have a white coffee, and can I also have a ginger beer?" It's good to see you alive, I say. He smiles. Which might be true, but actually Gascoigne says the stories weren't far off the mark. It was last summer and he had popped into the pub for a pint and got a lift into Newcastle with strangers. Did it scare him? As a footballer, Gascoigne was a one-off – the most talented and loved British player of his generation. How long was he in the cupboard?

"What’s Stopping Women?" by Anne-Marie Slaughter Exit from comment view mode. Click to hide this space PRINCETON – When I wrote the cover article of the July/August issue of The Atlantic, entitled “Why Women Still Can’t Have It All,” I expected a hostile reaction from many American career women of my generation and older, and positive reactions from women aged roughly 25-35. I also expected to hear from business representatives about whether my proposed solutions – greater workplace flexibility, ending the culture of face-time and “time machismo,” and allowing parents who have been out of the workforce or working part-time to compete equally for top jobs once they re-enter – were feasible or utopian. What I did not expect was the speed and scale of the reaction – almost a million readers within a week and far too many written responses and TV, radio, and blog debates for me to follow – and its global scope. Reactions differ across countries, of course. The Germans are deeply conflicted.

Lawyers, Tiggers & Bears, Oh, My! - Features I. In Which We Are Introduced to Winnie-the-Pooh and Some Lawyers, and the Stories Begin HERE IS EDWARD BEAR, known to his friends as Winnie-the-Pooh, sitting upright in an office chair at a Century City law firm. A lawsuit has been filed against the Walt Disney Company. As Pooh tries to give his mind to the matter, Bertram Fields—the man who calls himself Pooh's lawyer—appears in the 20th-floor conference room of Greenberg Glusker Fields Claman Machtinger & Kinsella, where Pooh happens to be sitting. Pooh and Fields have something in common: They are septuagenarians, which is a long, difficult word that means they are Very Old. Things have changed a lot for Pooh since then. Fields never seems confused. Now Fields says he works for Pooh, though his client in this case is really Shirley Slesinger Lasswell, the tiny, 80-year-old grandmother in the royal blue suit who today sits across the table from the huge stuffed bear. There are two pots of money to fight over. She's right, of course.