Prostitution vs. Organized Religion. My Heinlein quote did not go unnoticed. 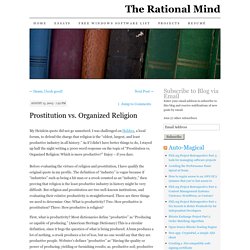 I was challenged on Hobbes, a local forum, to defend the charge that religion is the “oldest, largest, and least productive industry in all history.” As if I didn’t have better things to do, I stayed up half the night writing a 3000 word response on the topic of “Prostitution vs. Organized Religion: Which is more productive?” Enjoy – if you dare. Religious Views on Legalizing Prostitution. What keeps prostitution illegal in many parts of the world is that people find it morally objectionable, and what makes prostitution morally objectionable is that sex, according to the religious views of many, is a sacred act, reserved for married couples and should not be bought and sold like any base, man-made creation. 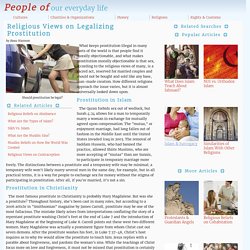 How different religions approach the issue varies, but it is almost universally looked down upon. Prostitution in Islam The Quran forbids sex out of wedlock, but Surah 4:24 allows for a man to temporarily marry a woman in exchange for mutually agreed upon compensation. The "mutaa," or enjoyment marriage, had long fallen out of fashion in the Middle East until the United States invaded Iraq in 2003.

The removal of Saddam Hussein, who had banned the practice, allowed Shiite Muslims, who are more accepting of "mutaa" than are Sunnis, to participate in temporary marriage more freely. The real harms of prostitution. In prostitution, men remove women's humanity. 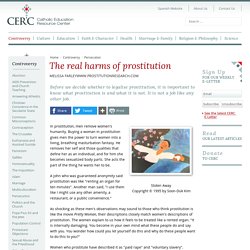 Buying a woman in prostitution gives men the power to turn women into a living, breathing masturbation fantasy. He removes her self and those qualities that define her as an individual, and for him she becomes sexualized body parts. She acts the part of the thing he wants her to be. A john who was guaranteed anonymity said prostitution was like "renting an organ for ten minutes". Another man said, "I use them like I might use any other amenity, a restaurant, or a public convenience. " As shocking as these men's observations may sound to those who think prostitution is like the movie Pretty Woman, their descriptions closely match women's descriptions of prostitution. 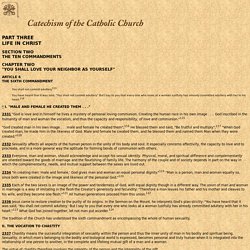 " But I say to you that every one who looks at a woman lustfully has already committed adultery with her in his heart.114 "God created man in his own image . . . male and female he created them";116 He blessed them and said, "Be fruitful and multiply";117 "When God created man, he made him in the likeness of God. Male and female he created them, and he blessed them and named them Man when they were created. "118 The tradition of the Church has understood the sixth commandment as encompassing the whole of human sexuality. The virtue of chastity therefore involves the integrity of the person and the integrality of the gift. BBC iWonder - Prostitution: Is there anything wrong with selling sex? Life Ministries. By Andrew Lansdown Prostitution involves the selling and buying of sex.It involves an exchange of money for sex between a man and a woman*who have no legal, moral or emotional attachment to each other. 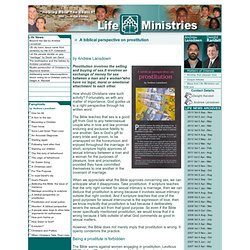 How should Christians view such activity? Fortunately, as with any matter of importance, God guides us to a right perspective through his written word. The Bible teaches that sex is a good gift from God to any heterosexual couple who in love and law promise enduring and exclusive fidelity to one another. Sex is God’s gift to every bride and groom, to be unwrapped on the honeymoon and enjoyed throughout the marriage. When we appreciate what the Bible approves concerning sex, we can anticipate what it disapproves. 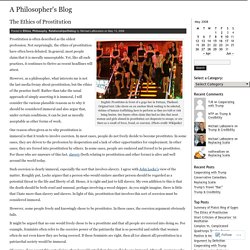 Original text: Like slaves on an auction block waiting to be selected, victims of human trafficking have to perform as they are told or risk being beaten. Sex buyers often claim they had no idea that most women and girls abused in prostitution are desperate to escape, or are there as a result of force, fraud, or coercion. (Photo credit: Wikipedia)